The legend and all the films that gave rise to Nia DaCosta's acclaimed new production. 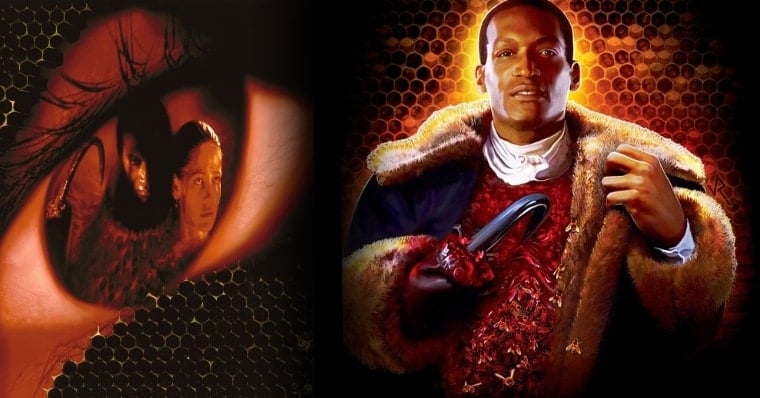 Candyman has arrived in theaters promising to be one of the horror films that will chill audiences in 2021. A spiritual sequel to the cult classic Candyman (1992), the film is produced and written by Jordan Peele and directed by Nia DaCosta, who explores the original’s mythology more profoundly and intelligently way.

Candyman, the “mirror killer,” is more than just a man. Instead, he is a symbol, a metaphor, and a personification. But of what, exactly? What is the real story behind one of horror cinema’s most classic antagonists?

Learn all about Candyman below, from its origins to the works inspired by Clive Barker‘s short story!

What is The Candyman Story Based On?

The Candyman was based on “The Forbidden” short story published in Fantasy Tales magazine in 1985 by author Clive Barker and months later in the fifth volume of six-volume Books of Blood anthology.

These collections of horror short stories were responsible for propelling the author to success. Many have been adapted for TV and film, but Candyman – or “The Forbidden” is easily the most popular.

Clive Barker is known for his subversive and grotesque horror, and when creating the character, his primary inspiration came from urban legends and myths of the United States.

The character is clearly inspired by the figure of the mysterious killer with a hook for a hand. However, he is also influenced by Bloody Mary and other figures from the grotesque imagination.

The films further explore this notion of urban legends, portraying the character as a figure who gains strength through the faith of the people who believe in his story and power. But, of course, he also can turn people into myths, just like himself.

In both the short story and the movies, the mythology of the Candyman is very peculiar and interesting. To summon the legendary killer, one must speak his name five times. After that, the “conjurer” is tested on his faith in the Candyman myth, and if the person does not believe in him, he is soon killed in a brutal way.

The book is quite different from the movies. Initially, the antagonist’s look was very different, more monstrous-looking. In the book, he is described as a supernatural being with blue skin – whereas, in the movies, he is a black man.

When he approaches, his victims can hear the buzzing sound of bees – which come out of his body from his chest. He has a hook in place of one of his hands and can appear anywhere he wants.

The tale is set in Liverpool (England). It follows an upper-class woman who investigates an urban legend in the poor part of town for academic purposes but becomes obsessed with the dreadful figure.

After seeing Chicago, the director and screenwriter Bernard Rose changed the narrative and its location, adding more fantastic layers to discussing the racial issue with a black protagonist.

What Was the First Candyman Movie?

It is essential to keep in mind that some things were different in the original tale because much of what enshrines Candyman today was the changes it went through to reach the big screen.

The first adaptation took place in 1992 with Candyman, by director and screenwriter Bernard Rose. The filmmaker took it upon himself to bring Barker’s work to the big screen but made changes that enhanced the piece.

At first, Rose changed the plot’s location. Instead of the United Kingdom, Clive Barker’s home country, he set the story in the United States based on his outrage at the brutal murders and social inequality in Chicago.

The filmmaker was inspired by a strange murder case in which the criminal broke into the victim’s house through a hole in the bathroom closet and how housing developments were built facing expensive condominiums in the city – separated only by a train line.

The director even decided to shoot the film in one of these locations, the Cabrini-Green housing developments, notoriously marked by poverty and violence.

Bernard Rose thus further deepened the theme of social inequality in Clive Barker’s tale, but the other trick would only come at the casting stage.

To play the main character, Helen Lyle, names like Alexandra Pigg (Bernard Rose’s wife) and even Sandra Bullock, but who won the role was Virginia Madsen (Sideways, Rebel Angels).

For the villain, the production wanted Eddie Murphy but could not afford the actor.

The actor elevated the physical menace of the entity, with his almost 6 feet tall and a thick, soul-penetrating voice, and brought elegance to the antagonist.

What is The Story of Candyman?

Candyman (1992) was highly praised for its social and racial commentary, and the second factor is courtesy of Tony Todd.

Going beyond the white protagonist dealing with problems outside of his reality, such as racism and poverty, the actor planned a backstory for his character, becoming canon within the franchise.

Tony Todd expanded the Candyman mythology by imagining him as a slave’s son murdered after falling in love with a young white elite girl.

The legend created by Tony Todd imagines that the figure who would become the Candyman was, during the 19th century, the son of a slave who became wealthy by inventing the shoe machine.

Because of this, his father sent the boy to the best schools, and the result was a brilliant young artist with the manners and dress of the elite. The problem arises when the boy is hired to paint the tycoon’s white daughter but falls in love with her.

When the father discovers the interracial relationship, he becomes so enraged that he gathers an angry mob. The young man is then hunted down and has his right hand – his artistic instrument – cut off with a rusty saw.

Even more sadistic, the mob then rubs fresh honey on his body and throws the young man among the bees to be stung to death.

This is where the name Candyman comes from. His corpse is then burned, and the ashes are scattered throughout the region, serving as the basis for his curse.

How Many Candyman Movies Are There?

The first film was 1992’s Candyman, which became a hit for its performances by Virginia Madsen and Tony Todd, its layered script, its direction by Bernard Rose, and its fantastic soundtrack by Philip Glass. The original film has a 77% approval rating at Rotten Tomatoes, but the sequels have not had the same luck.

The first sequel came as early as 1995, called Candyman: Farewell to the Flesh, and was directed by Bill Condon – the same filmmaker who recently helmed the final two parts of the Twilight saga and the live-action Beauty and the Beast (2015).

The plot takes Candyman out of Chicago and places him in the city of New Orleans. The second film has a score of 25% on Rotten Tomatoes.

Somehow, the third – and last, by a long shot – managed to be even worse. Candyman: Day of the Dead was released directly to home video in 1999, directed by Turi Meyer, of series such as Buffy the Vampire Slayer and Smallville.

The movie follows the assassin tormenting one of his descendants to become a legendary assassin figure, just like him. The result is a film with an incredible 8% approval rating on Rotten Tomatoes.

With the help of producer and co-writer Jordan Peele, known for Run! (2015) and Us (2019), the director and screenwriter Nia DaCosta resurrected the franchise.

The pair ignored the questionable sequels and created a direct sequel to the original, which would bring new characters being tormented by the original Candyman – this time, back in the same Chicago neighborhood, but now marked by gentrification.

This new approach became Candyman, released in theaters in August 2021. The result seems to please: in addition to having an 85% approval rating at Rotten Tomatoes, beating even the original, the new movie marks the first time that a work by an Afro-American director has debuted at the top of the North American box office.

Interestingly, several Candyman-related projects have been developed, but some never got off the ground. In the 2000s, inspired by the commercial success of Freddy vs. Jason, Miramax even considered producing a crossover movie between Candyman and the characters from the Hellraiser franchise.

Clive Barker, who created both franchises and their characters, was vehemently against the idea since the Hellraiser universe has nothing to do with the concepts demonstrated in Candyman.

Still, it would have been interesting to see a confrontation between the legendary assassin and Pinhead, the leader of the Cenobites in Hellraiser.