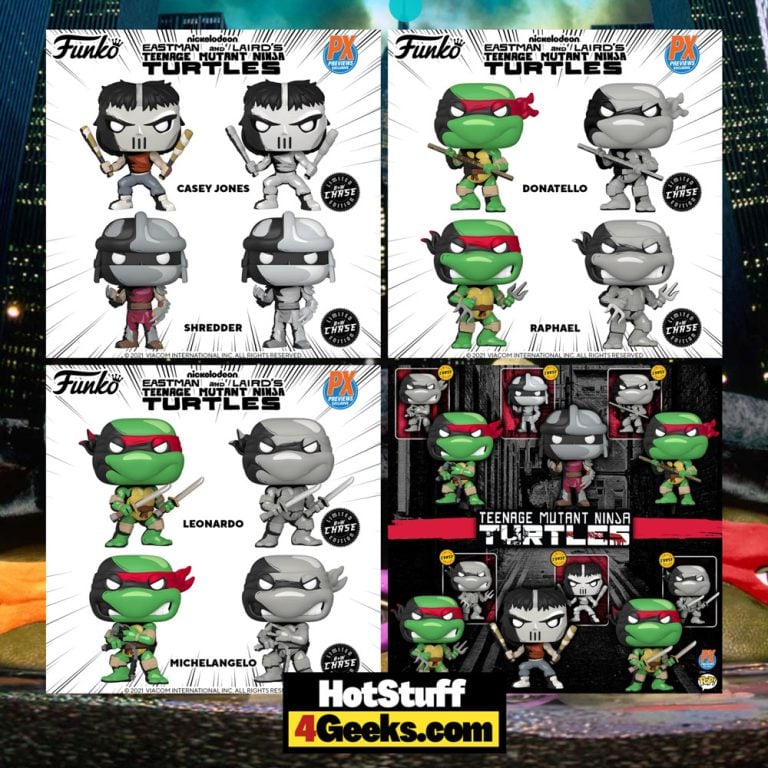 Cowabunga! Leaping from the comic directly for our collection, check out the all-new PX Exclusive Teenage Mutants Ninja Turtles (TMNT) Comic Funko Pop! Vinyl Figures and all those Black and White Chase Variants!

Teenage Mutant Ninja Turtles are a group of heroes composed of four mutant turtles, masters of the ninja martial arts, who are going through the torments of adolescence and living in the sewers of New York City.

It may seem like a particular set of bizarre things, but that’s exactly what makes the Ninja Turtles such a unique group that has been adored by fans for over 38 years!

Here’s the line-up for this release:

Now that a brand new line of PX Previews Teenage Mutant Ninja Turtle Pops has landed, you don’t want to miss the occasion for sure! PLUS each has a 1 in 6 chance of receiving the rare black and white Chase variant!

The Teenage Mutants Ninja Turtles Funko Pops with B&W Chase, Previews (PX) Exclusives are now available for pre-order at the links below (click to jump!) 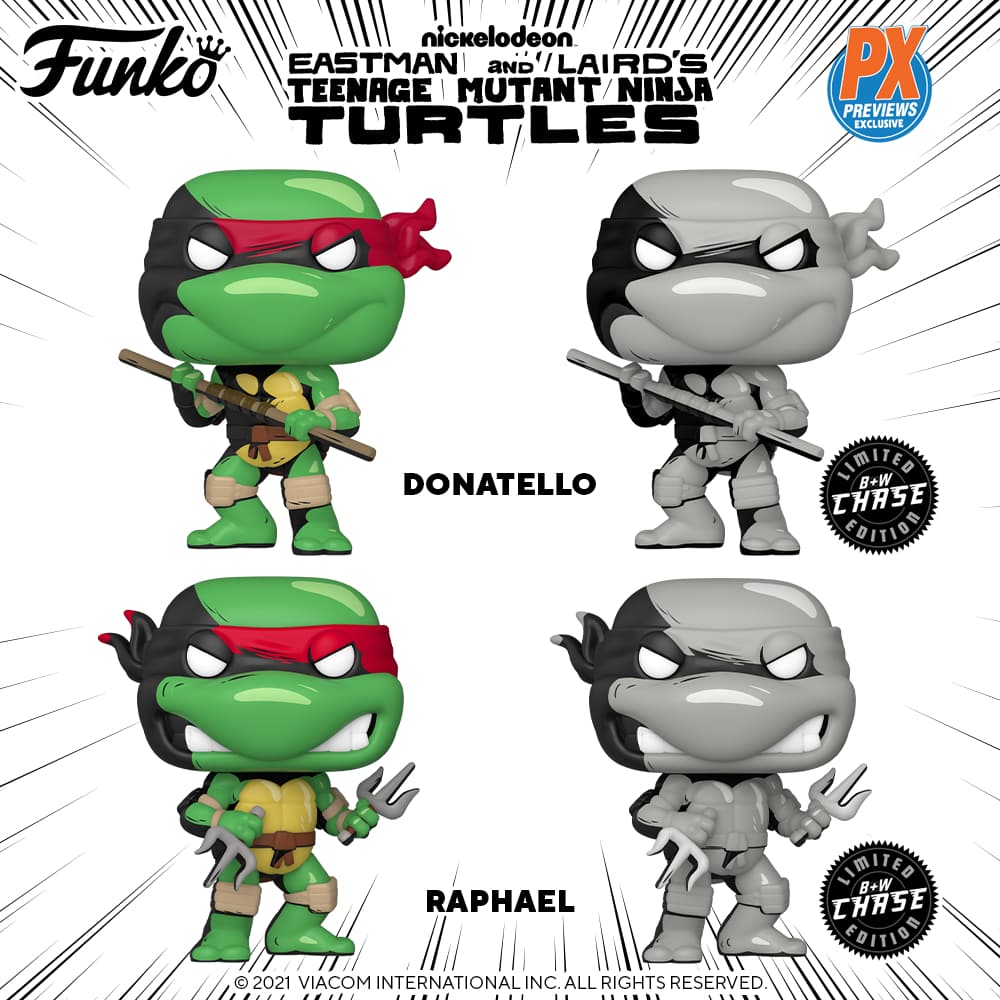 The Ninja Turtles have been part of our imagination for over 38 years. Raphael, Leonardo, Michelangelo, and Donatello are the members of this team of mutant turtles that delighted many of us thanks to the cartoon that aired on TV in 1987, and that continues to fascinate us through the films of Michael Bay.

Although the cartoon has accompanied our childhood, there are details about the Turtles that many may not know. So, since I don’t want you to be alone in that dark corner of the unknown, I bring you some interesting facts about this collective of expert martial arts Turtles and Pizza addicts! 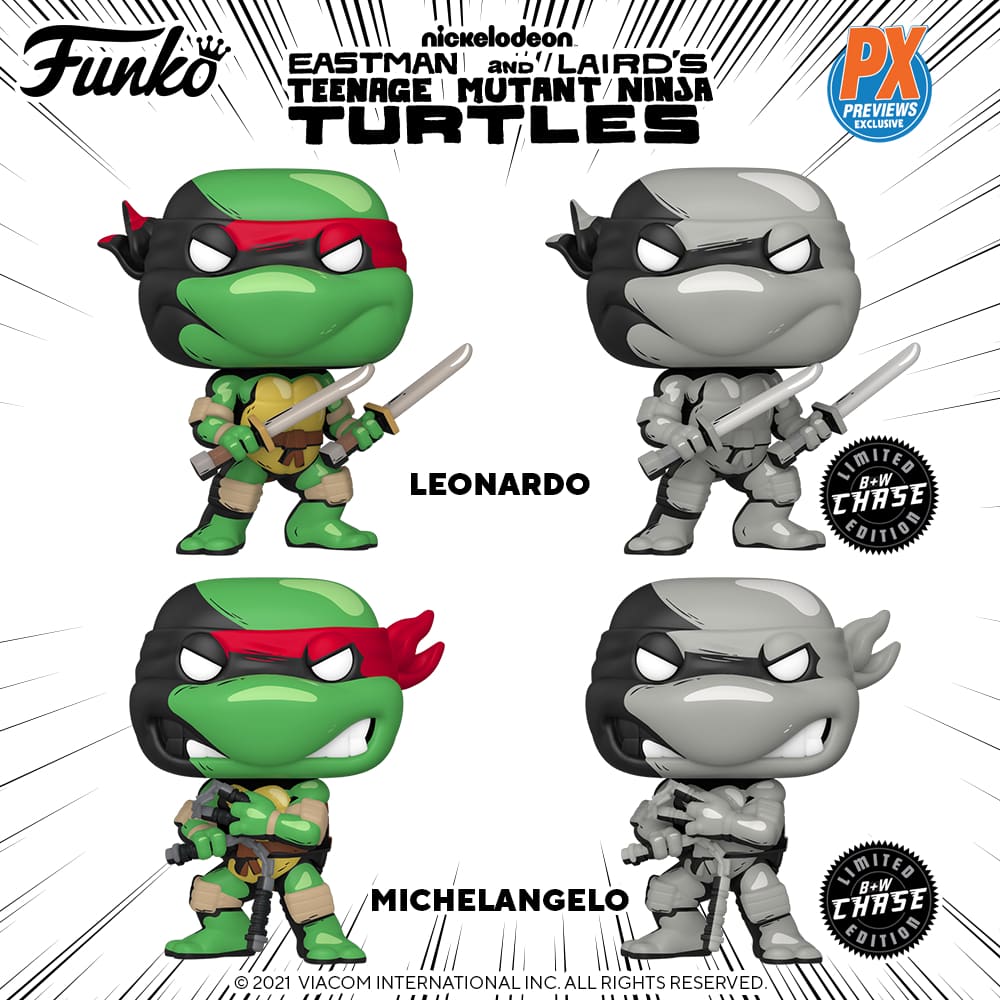 The Teenage Mutants Ninja Turtles Funko Pops with B&W Chase, Previews Exclusives are now available for pre-order at the links below (click to jump!)

It all started as a joke…

Let’s go back to November 1983, when artist Kevin Eastman drew a Turtle holding some sticks and titled it “Ninja Turtle.”

His colleague Peter Laird received the image and, amid laughter, drew a new version. Later, and in response to Laird’s illustration, Kevin Eastman made the first image of the Ninja Turtles team. This draft of the Turtles team was later sold at an auction for about $70,000. 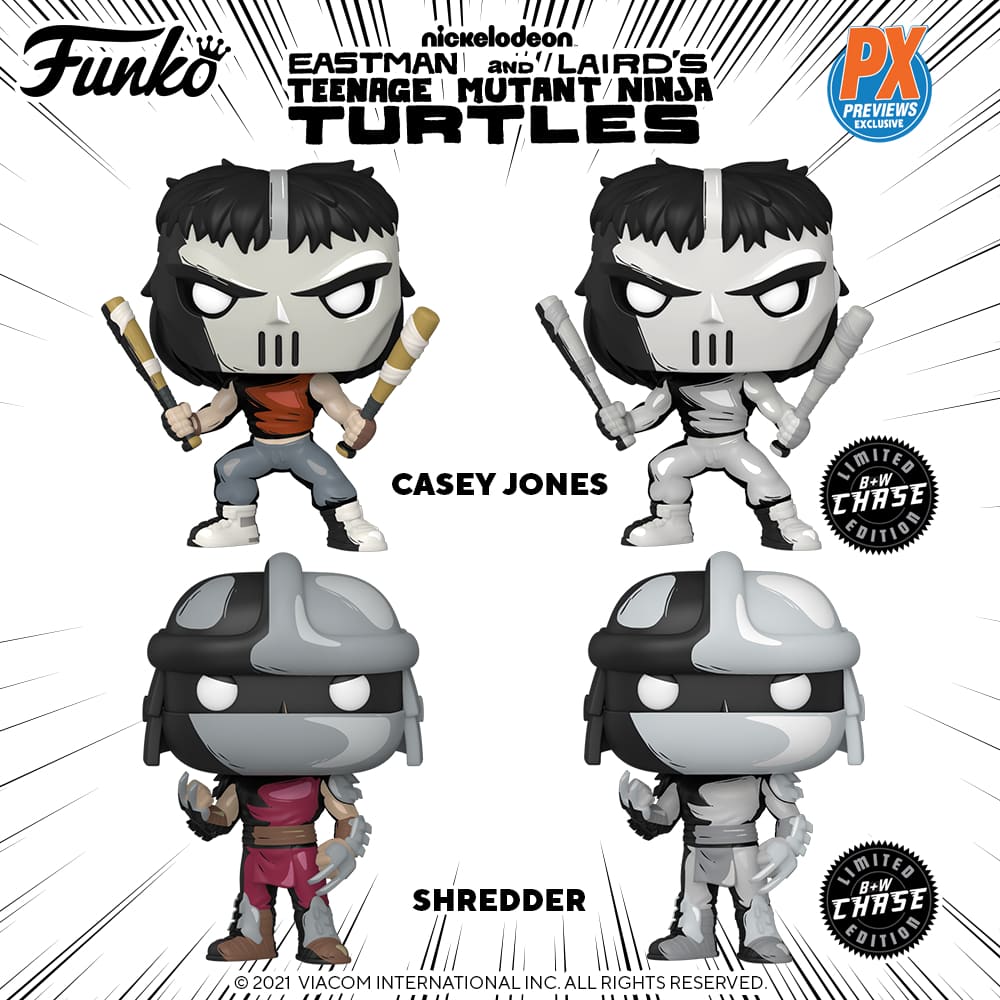 …and a Daredevil’s parody.

The Ninja Turtles comics were created as a parody of some Marvel superheroes, the main target being, without a doubt, the Daredevil. Want to see some of the similarities?

What the Turtles, in the comics, call the “Foot Clan” resembles the one that the Daredevil faces under the name “The Hand.”

While Daredevil had a guy named Stick as his mentor, the Turtles also have a character with the same characteristics, a human-sized rat named Splinter.

But the closest thing is in the origin of the Turtles. The origin story of Daredevil takes place when Matt Murdock saves a man from being run over by a truck, which spills its cargo and ends up spilling chemicals on Matt, making him blind and with super heightened senses.

The scenario is the same with the turtles, but the substances fall on four baby turtles, turning them into the characters we know. 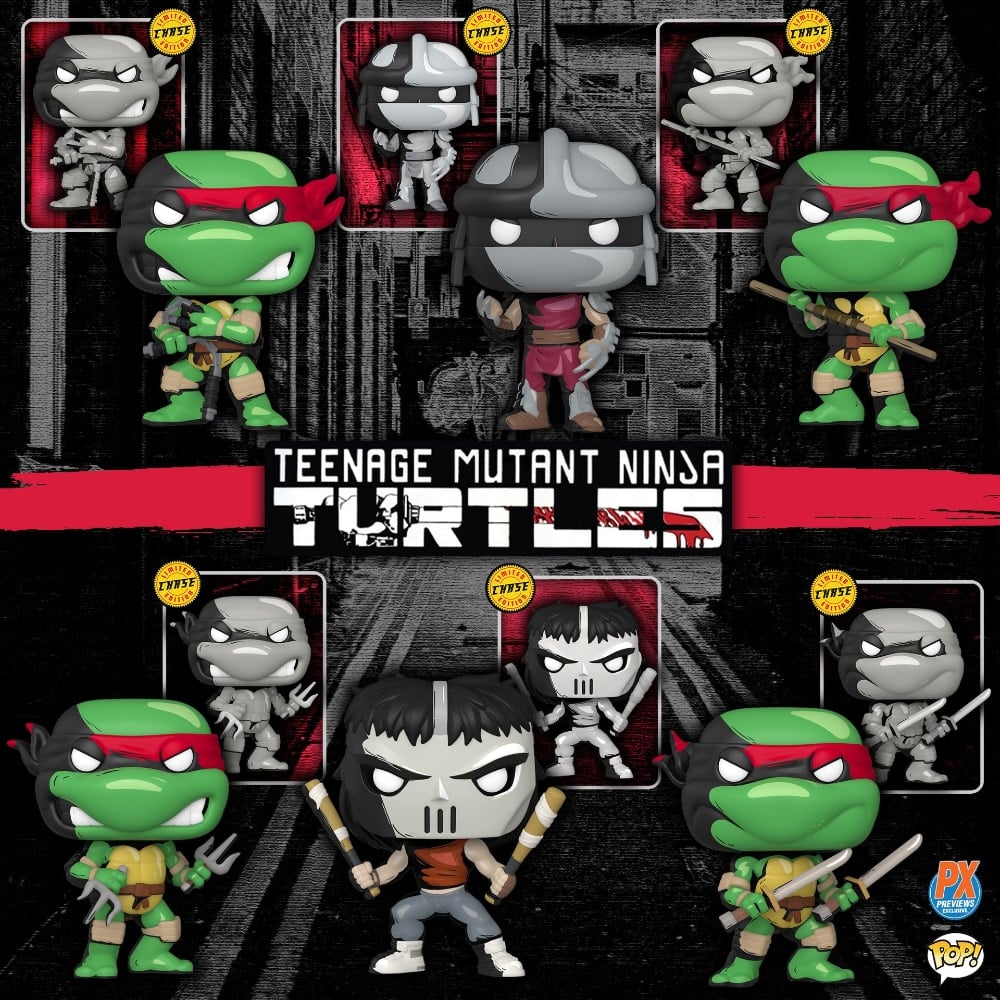 The Teenage Mutant Ninja Turtles Funko Pops with B&W Chase, Previews Exclusives are now available for pre-order at the links below (click to jump!)

For the launch of the first comic book, the author had to go into debt.

It wasn’t easy to launch the first Ninja Turtles comic book. One of the authors, Kevin Eastman, zeroed out his bank account, borrowed money from an uncle, and invested it all in the production of the comics and advertising. The investment paid off, and all the comics sold out in less than two weeks. An impressive achievement, being that they were utterly unknown characters to the public.

The Turtles were not always friendly.

In the beginning, things were not all party and pizza. In the early comics, the Turtles were very dark characters. The Turtles killed a lot and had only one mission, to kill Shredder. cheese grinder!)

And some of the stories were quite bizarre.

From 1989 to 1995, 72 comics were released in a “Teenage Mutant Ninja Turtles Adventures” series. In these comics, there were some of the most bizarre stories of the team. For example, in one of the comics, the turtles traveled to another dimension in a giant cow’s head. There is also a book in which Raphael beats up a Robotic Hitler.

Everyone has wanted a toy turtle.

We all wanted to have the figures of all the Turtles as children! These toys were so spectacular that they made it onto Forbes magazine’s list of the “100 best toys of all time.” The most expensive was the figure of a cat dressed in a prison uniform called Scratch. So if you want to buy this little toy today, be prepared to fork out about a thousand dollars.