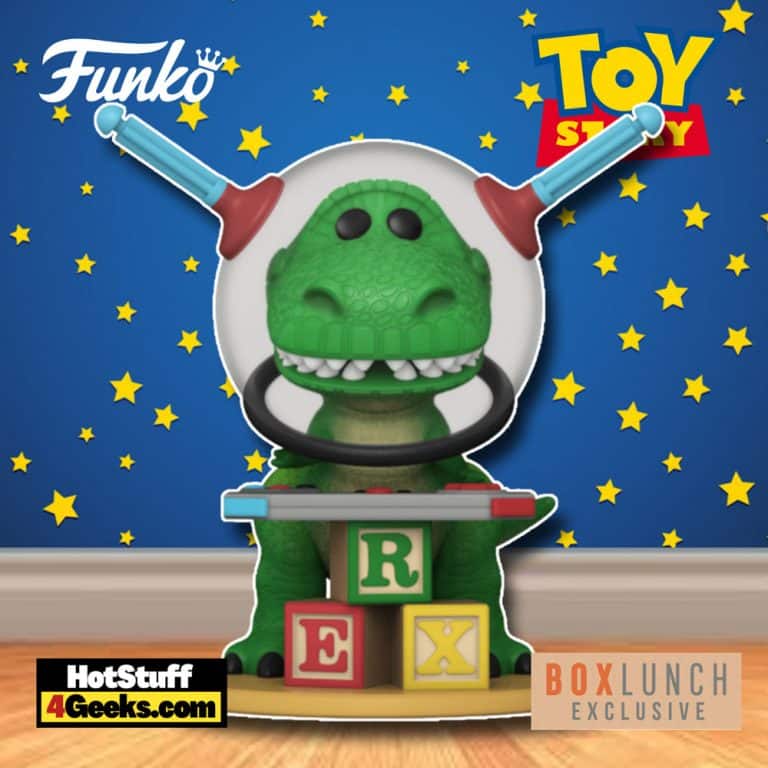 Rex isn’t quite like your typical dinosaur. Toy Story’s tyrant lizard is much more like a buddy puppy. He’s a tyrannosaurus Rex with an inferiority complex. Fearful, he is always reluctant before embarking on an adventure but ends up accepting out of loyalty to the group.

Although he is almost always distracted and knocking things over where his tail goes, Rex is sensitive and has a big heart, always willing to help his friends, even with the difficulties he faces.

BoxLunch exclusive Rex Funko Pop! Deluxe is now available for order at the links below. 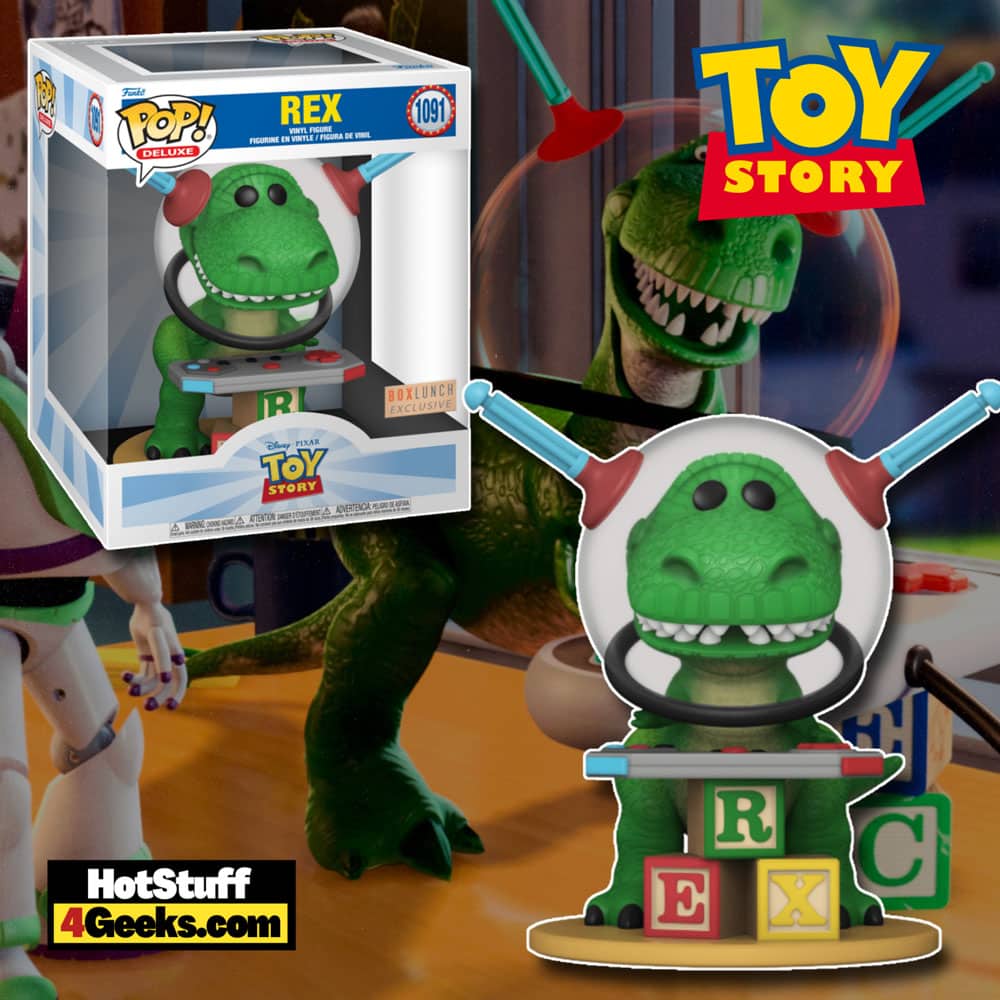 Toy Story is a Pixar film franchise that shows the adventures of a group of toys. The film series, starring Woody and his gang, made its debut in 1995, becoming the first animated film entirely produced by computer graphics.

The premise behind Toy Story is that while not in use by their owners, toys come to life and interact with the world around them. 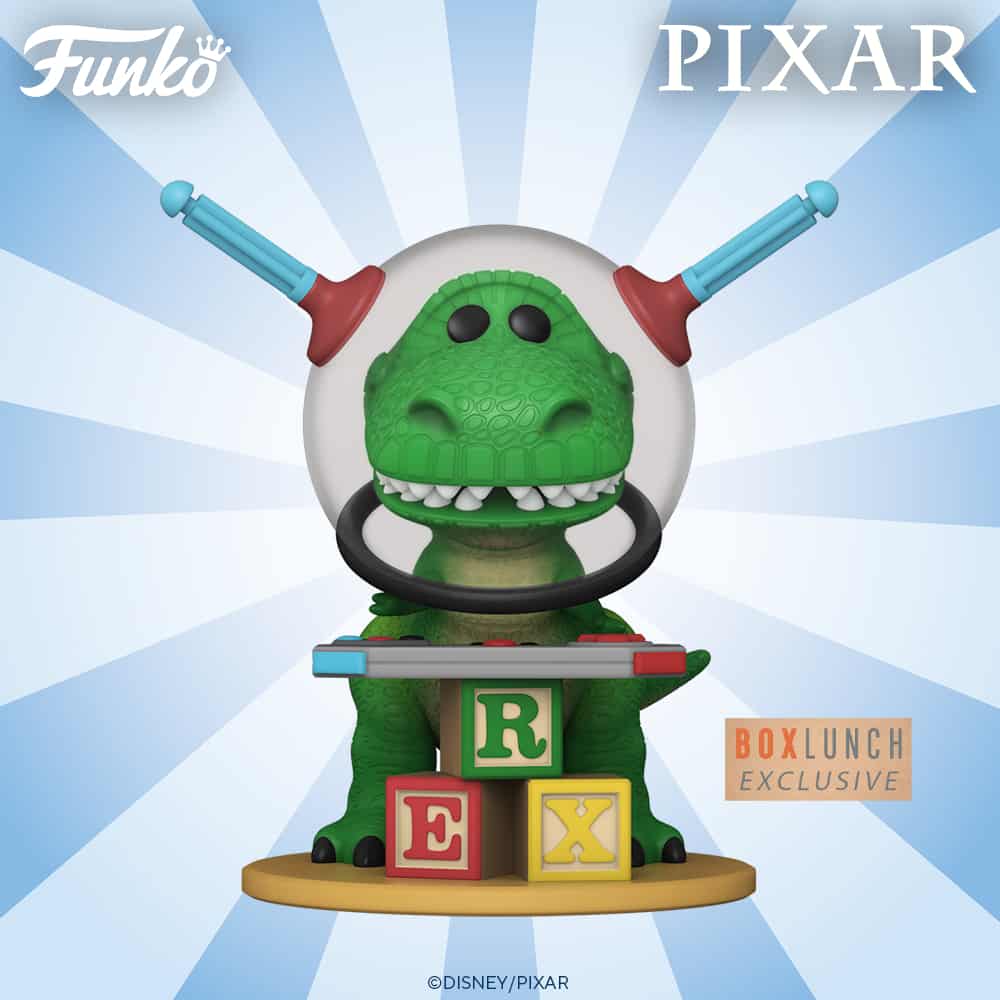 Toy Story 1, the first film in the franchise, premiered in 1995 and introduced the world to the toys of 8-year-old Andy. Woody, Bullseye, Rex, Slinky, Mr. Potato Head, Hamm, and Bo Beep live their owner’s childhood happily until Buzz, a new and modern toy (who doesn’t believe he is a toy), arrives and threatens the stability of the household.

In Toy Story 2, Woody is stolen by a toy collector. Buzz and the other toys organize a rescue mission, but the cowboy is confronted with the ominous question about his future with Andy. In addition, Mrs. Potato Head, Jessie, and Barbie are introduced in the film.

In Toy Story 3, the third film, Andy is already 17 years old and about college. The Toys live in fear of their owner leaving them aside, except Woody, who is chosen to go with him. The separation, however, does not last long, and the toys end up going to the Sunnyside daycare center.

Toy Story 4 is the last film in the franchise. Two years after Bonnie’s adoption, the toys go on a trailer trip with the little girl and her family. While reacquainting themselves with old friends along the way, the gang must welcome Forky, a new and different toy.