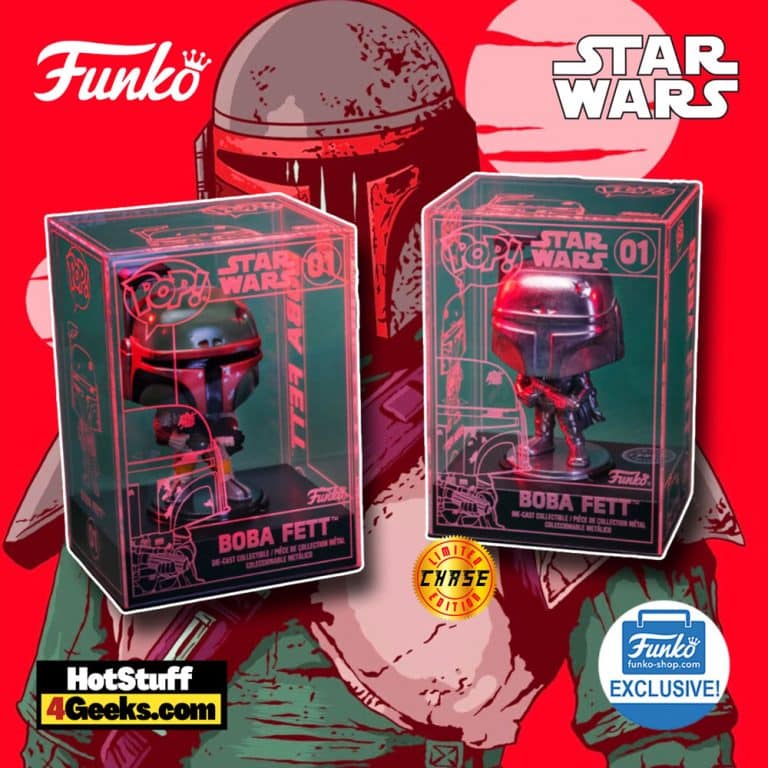 Bounty hunting is Boba’s game, and he would probably tell you that the first rule to being a great bounty hunter is having this new cool Funko Pop! Die-Cast: Star Wars – Boba Fett Metallic with Chase Funko Pop! Die-Cast Vinyl figure – Funko Shop Exclusive, featuring the unaltered clone/son of Jango Fett, who reemerges from the shadows wearing his famous father’s armor and holding a blaster.

Few heroes are more feared than the mysterious and menacing Boba Fett, one of the most skilled bounty hunters in the galaxy.

This figure comes in die-cast acrylic featuring etched details and fastens to the base of the case. A telescoping box features foil details and an inner foam lining to further protect the collectible in transit.

Boba Fett Die-Cast Funko Pop! is now available and can be found at the links below (click to jump!) 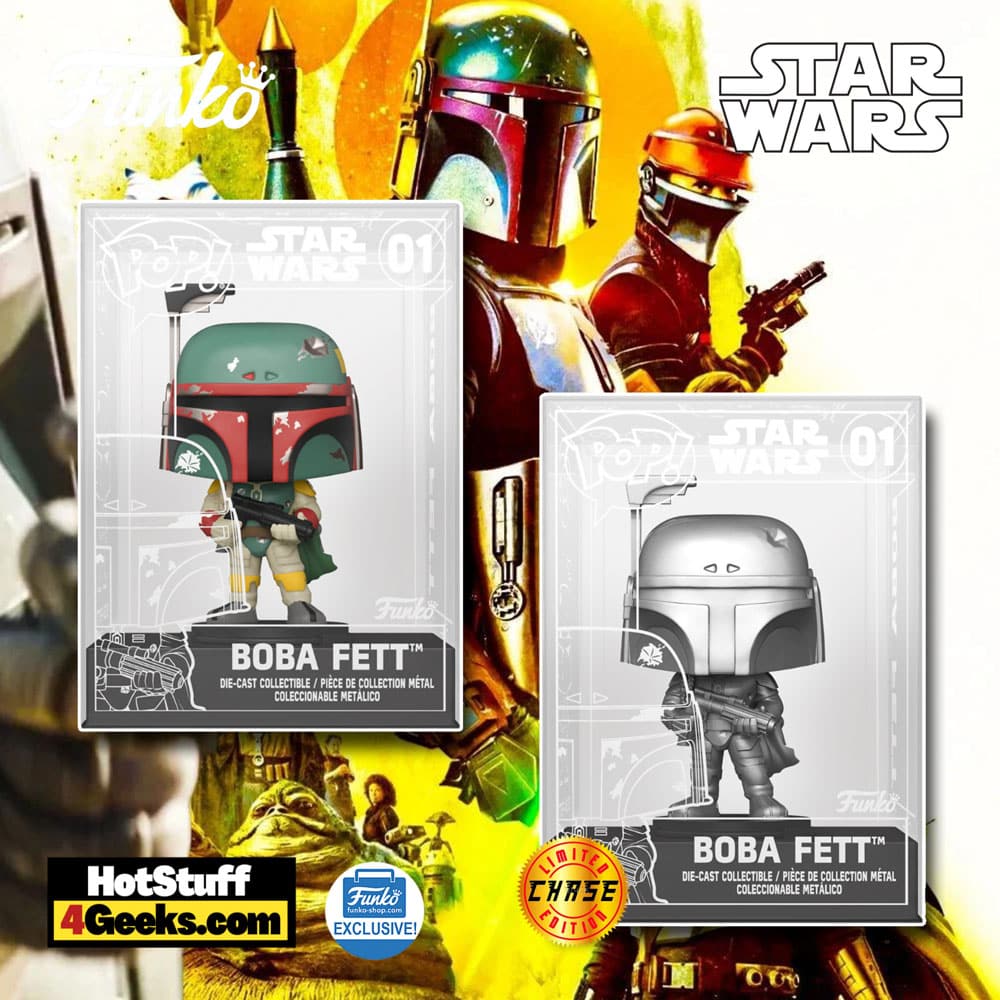 Boba Fett’s first appearance within the Star Wars canon takes place in The Empire Strikes Back, where he is one of the bounty hunters summoned by Darth Vader to find the Millennium Falcon.

The character pops up amidst several other races called for the mission. However, Boba was the only one that got the audience’s attention because of a single line.

It was enough to make the imagination of the fans go far. After all, who was this faceless man capable of obliterating his targets?

He is undoubtedly one of the most memorable characters of Star Wars, thanks to his iconic armor and his mysterious, cold, and skillful way. 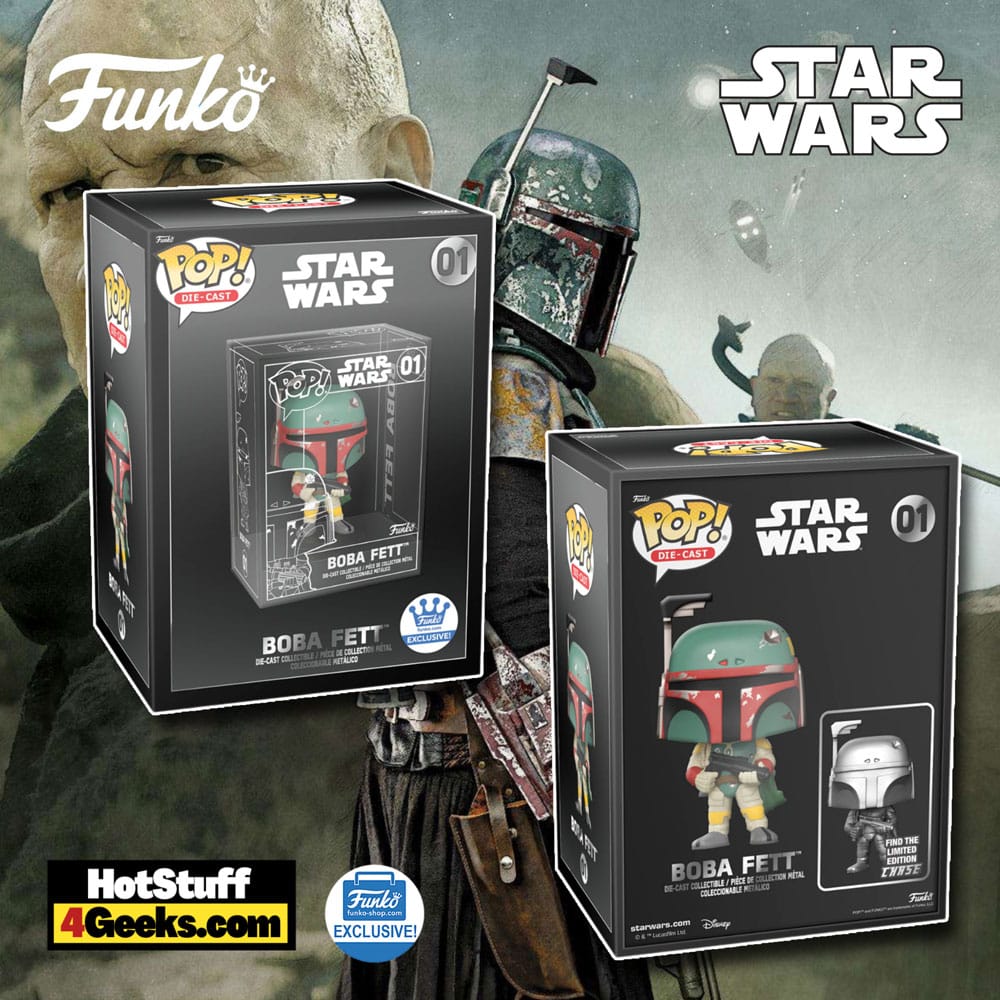 Since the idea was always to make Fett irrelevant, George Lucas never bothered to give him a decent arc within the story. In Return of the Jedi, his death is laughable, with his jetpack failing and falling into the Sarlacc pit, unable to do much.

In the DVD commentaries for the film, Lucas explains that he was so taken aback by Fett’s popularity at the time that, looking back, he regrets not giving the bounty hunter a more dignified end.

If he had imagined that he would be someone so beloved by the fans, he would have given the character a more significant role and a less childish death.

Fans had to wait almost 40 years to see the return of the bounty hunter in The Mandalorian.

With The Book of Boba Fett, and as the protagonist of his own live-action series, Boba Fett shows us how he escaped death, what he has been up to for the past five years since his return to The Mandalorian, and how he plans to take over the crime syndicate formerly dominated by Jabba the Hutt.