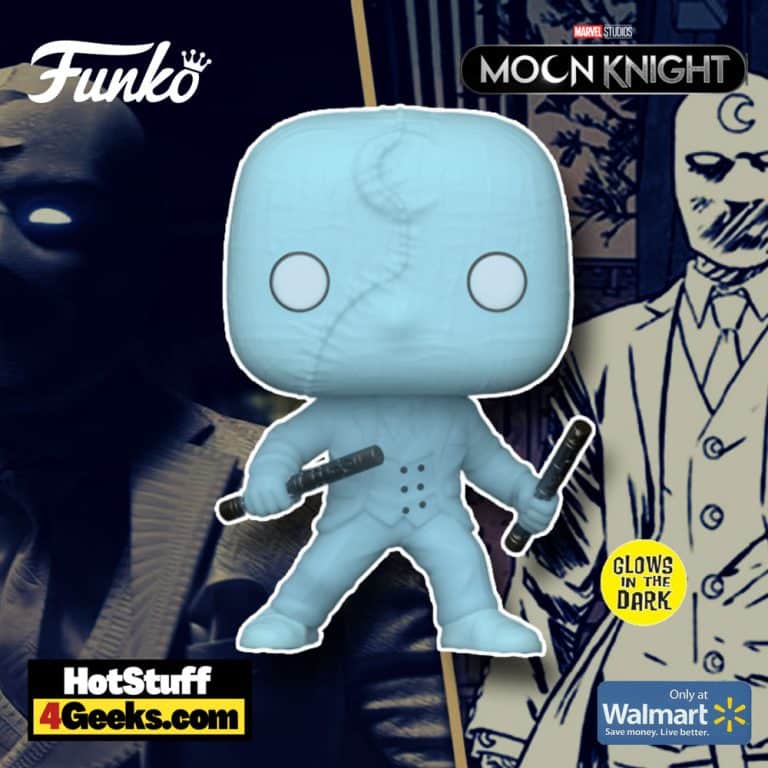 Mr. Knight GITD Funko Pop! from the Moon Knight Disney+ series, is now available for pre-order at the links below (click to jump!) 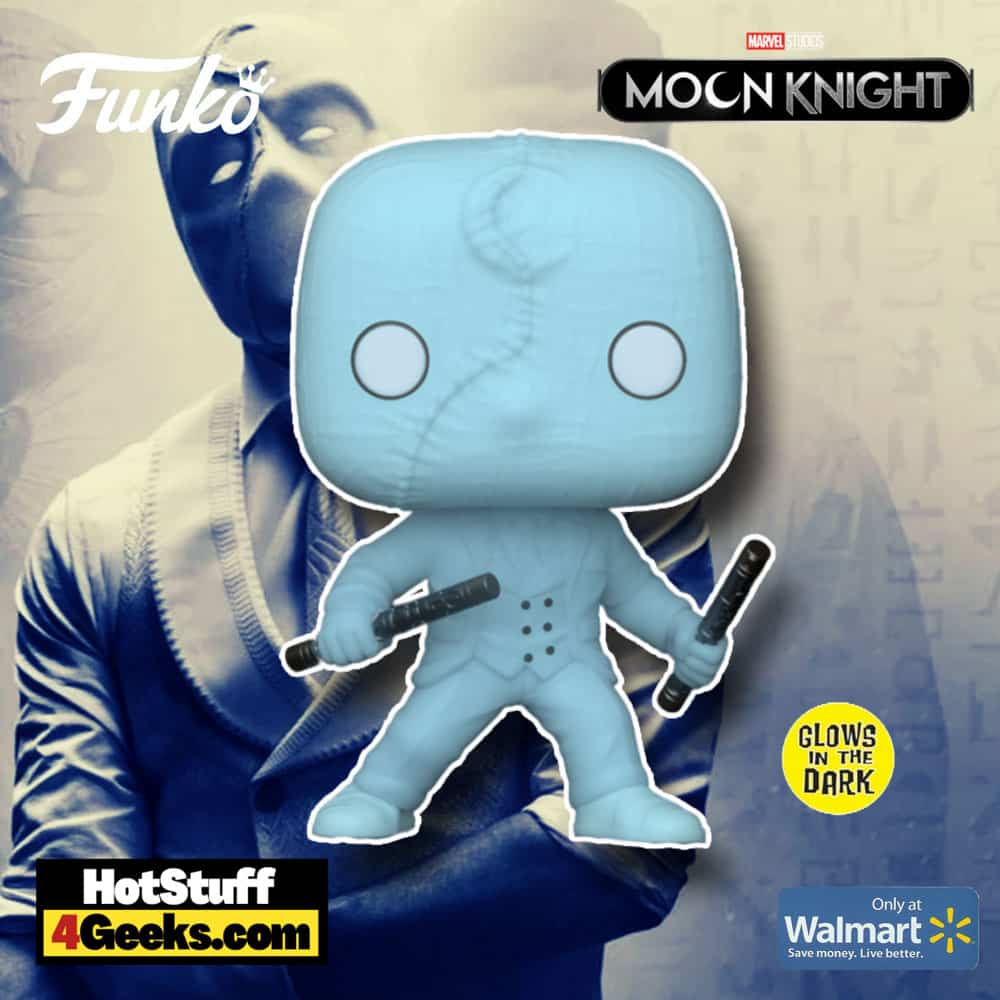 Like everything in Moon Knight’s trajectory, Mister Knight’s identity was built up little by little. It all began in 2011, in Secret Avengers issue #19, in which the hero uses one of his personalities to infiltrate the court of a powerful drug dealer.

For the mission, he appears as Steven Grant, who is a wealthy man full of contacts in the comics. Once reunited with the criminal, he wears a simple but exquisite costume consisting of a mask and a suit.

Comics did not revisit this look until three years later, when the Moon Knight got a new solo magazine. Scripted by Warren Ellis, the 2014 comic marked the beginning of a new era for the vigilante.

With art by Declan Shalvey, the first arc resumed the hero’s sleek look with an unprecedented motivation behind it. 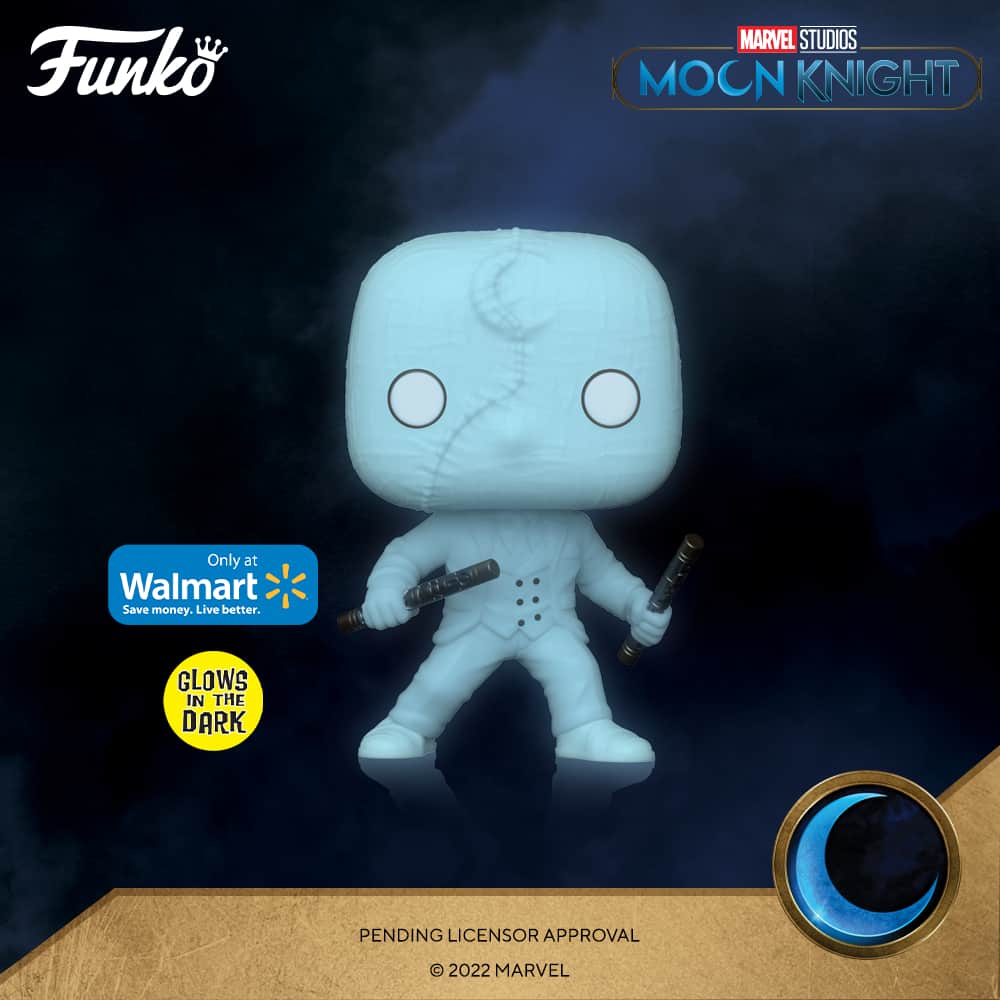 The story begins with Moon Knight returning to New York City after a period away from the city. He became known as a bloodthirsty vigilante in his homeland, who even ripped off a person’s face – a moment that actually happened in the comics years earlier.

To cooperate with the NYPD without bearing the legal consequences of years of brutality, he reappears as the elegant Mr. Knight. Turning a blind eye to the true identity of this figure, Detective Flint describes him as “a concerned citizen” who shows up at crime scenes to assist the men of the law.

In the Disney+ series, the Mister Knight costume has a very different motivation. The beginning of the series introduces Grant as a man tormented by having a multiple personality disorder.

He shares a body with Marc Spector, a mercenary with the power to conjure a unique costume that grants him powers. Known as the Moon Knight, this version with an outfit inspired by Egyptian mummies is given to him because he is an avatar of Khonshu, the Egyptian god of the moon.

With this, we come to the big reveal of the second episode. Unbeknownst to him, Steven Grant is also an avatar of Khonshu, having access to a uniform and powers of his own. However, instead of the crude hooded cloak-and-dagger version, he becomes a masked vigilante wearing a suit and tie.

In other words, in the TV series’s universe, Mister Knight is nothing more than the superheroic transformation of the Steven Grant identity.

The change even makes sense, considering that Moon Knight himself does not have a long enough career as a vigilante to need to invent a new secret identity to cooperate with the authorities.

The new version still retains a certain level of fidelity to the source material since Mister Knight is a disguise often used by Steven Grant.

The difference is that, while in the comics, the suit and tie symbolize the wealth that this character possesses, in the series, it represents the fact that Steven has a gentler and more sophisticated personality than the hard-nosed mercenary Marc Spector.