After Peter Parker has his identity as Spider-Man exposed by Mysterio, the young man’s life and reputation are turned upside down.

That is when he decides to ask Doctor Strange for help to make the world forget his secret identity through a spell. However, the spell goes wrong, and several villains from alternative realities begin to hunt Peter.

The film hit theaters on December 16, 2021, and became the biggest box office hit of the year.

Now you can relieve all this success with the new set exclusive to Walmart featuring the following pops:

The Walmart-exclusive Spider-Man: No Way Home 8-pack Funko Pops! are now available for pre-order at the links below (click to jump!) It’s expected to be released in March 2023. 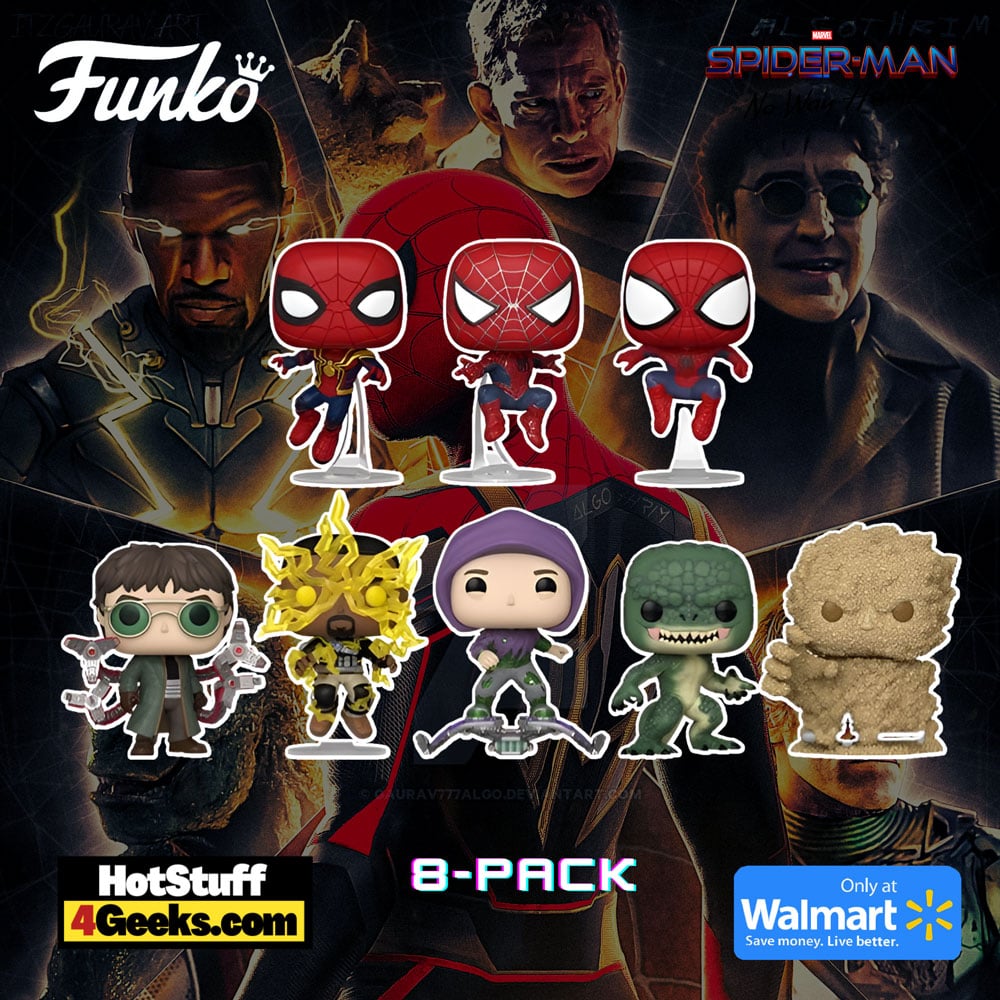 Released late last year, “Spider-Man: No Way Home” reached a massive box office and brought a more than electrifying conclusion to the first trilogy of the Spider-Man in Marvel’s Cinematic Universe – and apparently, Sony hasn’t had enough of the film yet, as they will release an extended version on the 7th of this month.

With a monumental cast and an even bigger story, the film delves into the Multiverse by bringing back two much-loved characters: the Spiders, played by Andrew Garfield and Tobey Maguire.

Even with the nostalgia overload, it’s still rewarding to see how the film wraps up not only Tom Holland’s trilogy but also the sagas of Tobey Maguire and Andrew Garfield in a very respectful way.

On the one hand, we see Holland’s Peter Parker finally being the hero we’ve wanted to see since his introduction into the MCU.

As for Tobey’s Spidey, he’s there almost like a mentor, like the older, more experienced version of the hero, who brings his wisdom to the battlefield and inspires not only Spidey/Tom but also Spidey/Andrew to be better people, better heroes.

And it’s even fun to see that he’s still fighting for Mary Jane Watson.

But the best conclusion is undoubtedly Andrew’s Peter, who Sony itself badly damaged in the Amazing Spider-Man saga – so much so that he didn’t even get his third film.

Here, he finally gets a chance to “redeem” himself for Gwen Stacy’s death by saving MJ in one of the most moving and beautiful scenes in the entire film.