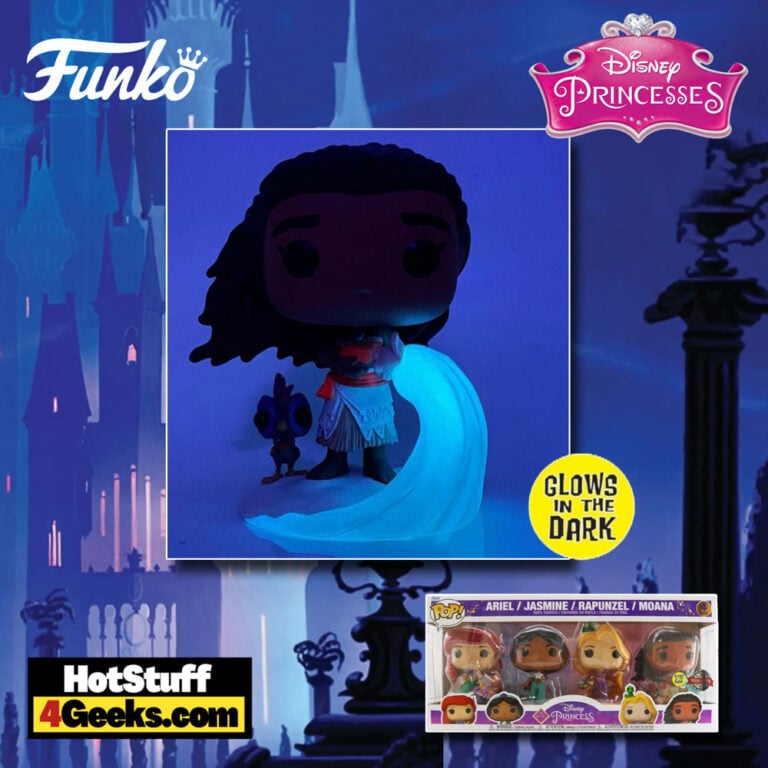 The most adorable Disney Princesses are all decked out in their signature looks and ready to take our collection by storm. The new Funko Pop! Disney Princess – Ariel, Jasmine, Rapunzel, and Moana Glow-In-The-Dark (GITD) 4-Pack Funko Pop! Vinyl Figures depicts all the love, bravery, brains, and beauty of the whole crew!

Once upon a time, four princesses lived in different parts of the world. Ariel lived underwater, Jasmine in a palace in the desert, Rapunzel in a tower in the forest, and Moana on an island in the middle of the ocean.

One day, they all received a Funko’s invitation to attend a royal ball. Ariel was excited to meet new people, Jasmine was curious to see what other cultures were like, Rapunzel was looking forward to dancing, and Moana just wanted to have a good time.

When they arrived at the ball, they all realized that they had something in common: they all loved to sing and dance! So they danced all night and had the time of their lives.

When the clock struck midnight, they all fell asleep in a giant pile of Funko’s.

Ariel, Jasmine, Rapunzel, and Moana are all strong, independent women who know what they want and aren’t afraid to go after it. They’re also incredibly beautiful, which doesn’t hurt. But there’s more to these ladies than meets the eye.

– Ariel is obsessed with human stuff. She’s constantly stealing forks and other objects from humans and has even been known to sneak into their homes to get a closer look at their things.

– Jasmine is fiercely independent and doesn’t need a man to complete her. She’s also an excellent fighter and is not afraid to stand up for herself or others.

– Rapunzel is brilliant and resourceful. For example, she was able to escape from a tower that was locked from the inside using nothing but her wits and a piece of silk cloth.

– Moana is a born leader. She’s confident and brave, and she knows how to inspire those around her.