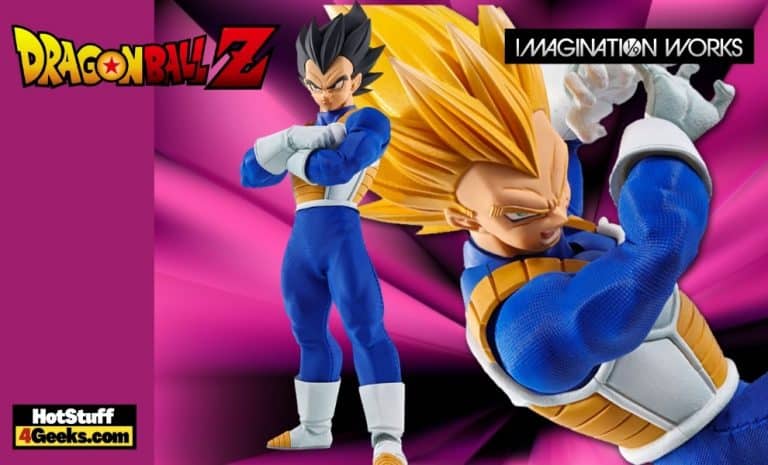 In addition to being one of the protagonists of the Dragon Ball saga, Vegeta is the prince of the nearly extinct Saiyajin race. He is the eldest son of King Vegeta, the older brother of Tarble, the husband of Bulma, and the father of Trunks. Along with Goku, Gohan, Piccolo, and Kuririn, he is one of the essential characters in the series.

Egocentric and very proud, Vegeta was once a ruthless killer. However, he abandoned this path to become one of the greatest heroes on planet Earth. Vegeta is further motivated throughout the various Dragon Ball sagas by one simple goal: to become stronger than Goku and be the most powerful Saiyajin in the universe!

Veget is portrayed in his classic Saiyan suit. The figure is cleverly designed to hide the arm and leg joints for a stunningly realistic appearance. A huge array of 12 expression part options let you customize his appearance for your displays.

The Bandai Tamashii Nations: Dragon Ball Z:  Vegeta – Imagination Works Action Figure is priced at $109.99 and can be found at the links below. Its release is scheduled for November 2021.

Vegeta first comes to planet Earth after learning that there were seven Dragon Spheres capable of fulfilling any wish on that planet. He arrived on Earth determined to gather the Spheres and ask the Dragon to grant him immortality, as this way he could face and possibly defeat Freeza, responsible for the destruction of his planet.

Once Vegeta arrived on planet Earth, he had to face Goku and company for the first time. Vegeta was such a cruel guy and obsessed with his own goals that he even tried to kill Gohan when he was just a child.

However, Vegeta’s extended stay on planet Earth caused him to make new friends, build a family, and change his list of priorities. He no longer cared only about himself. He now aimed to defend his family, particularly his wife Bulma and his children Trunks and Bulla.

One thing didn’t change though, Vegeta remained incredibly proud and never gave up on becoming the most powerful Saiyajin of all time.