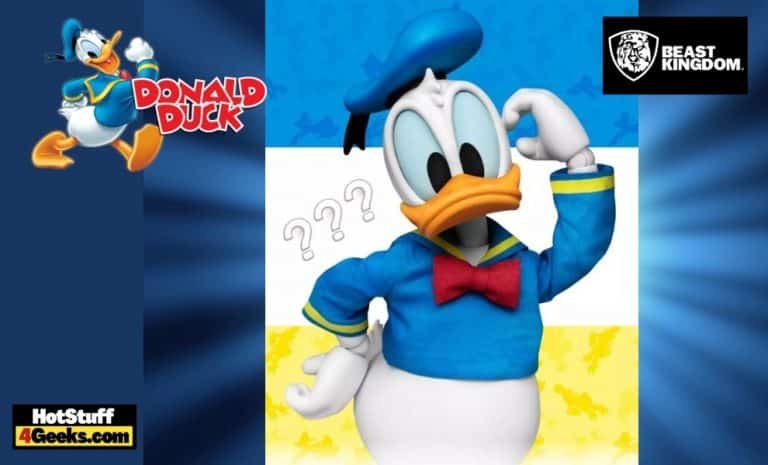 The famous character created by Walt Disney first appeared in a short film in 1934. Eighty-seven years later, his adventures continue to delight children and adults around the world.

A staple of Disney’s famous line-up, Donald Duck, has been in some of the most cherished stories in television, print, and cinematic history! As soon as he appeared on the big screen, however, it became obvious that Donald Duck had everything it took to be a big star. He was telegenic and had tons of charisma.

So much so that four years after his screen appearance, there was a comic book devoted to him, and by the 1940s, Donald Duck was a fierce rival to a ‘monster’ named Mickey Mouse.

Get ready for a highly articulated figure with a detailed design and a real fabric costume!

Accurate design and paintwork showcase Donald’s snow-white body and orange beak, and he includes a replaceable head, beaks, and hands, all allowing for the ultimate customization! Donald stands slightly over 6 1/4-inches tall.

Want to show off an angry Donald, or maybe a happy duck clasping his hands with joy? The sky is the limit with the DAH-042 figure! 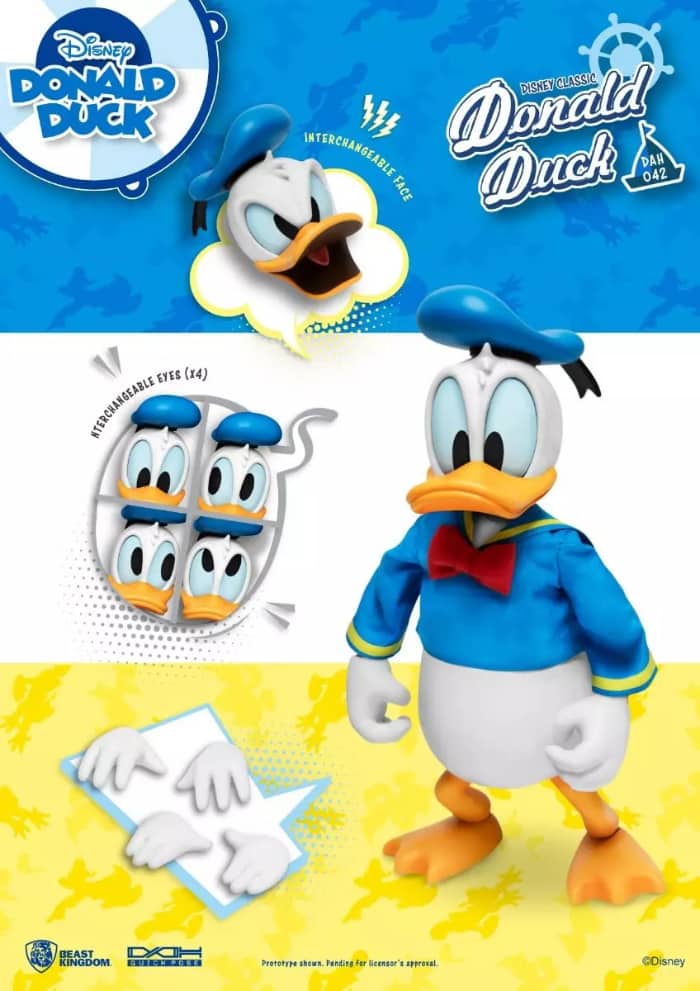 Donald Duck, a character created by Walt Disney, is already 87 years old! In 1934, he first appeared in a short film entitled “The Wise Little Hen,” adapted from a Russian tale. The hen needs help planting a field of corn, and her neighbor, Donald Duck, will do anything to keep her from having to “get her hands dirty.”

His clumsy, funny, and lazy style has made him known and loved by millions of people worldwide.

At 87 years old, Donald Duck has tried out more than 100 different professions… but he hasn’t succeeded in any of them. That’s why he always lives with financial struggles and ‘jumps’ from setback to setback. “He’s a loser, not a quitter, so he doesn’t go down without a fight,” Disney writes about his character.

But the character of Donald Duck would not be complete without the voice that made him famous. Clarence Nash, a countryman and skilled imitator of animal sounds, convinced Walt Disney by reciting the poem “Mary Had a Little Lamb.” Donald’s squeaky voice was found, and Nash starred in the Duck’s lines for more than 50 years, until 1986, when he passed away.

In 1937, Donald first had the lead role in a cartoon: “Don Donald.” On his way to stardom, Donald Duck has appeared in 128 movies – surpassing Mickey Mouse – and has received the honor of having a star on the Hollywood Walk of Fame.

His worldwide fame is indisputable: in Denmark, he is known as Anders And, in Indonesia as Donal Bebek, and in Italy as Paperino, to name just a few examples. 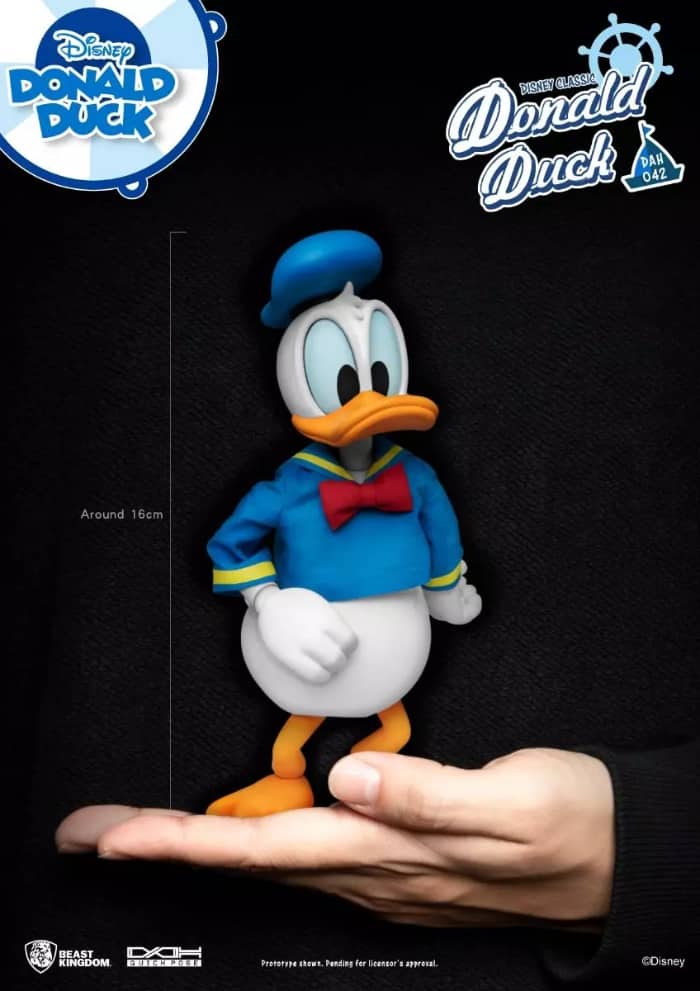 Why does Donald wrap himself in his towel after his bath if he doesn’t wear pants?

You are not the only one to wonder about this. So much so that Disney Studios themselves have already had to speak out about this controversial issue. According to them, “Donald puts a towel on when he gets out of the shower to dry himself off and not let the water run all over the floor.” But there are other more plausible explanations.

The first is that Donald follows an old tradition in comics and animation: anthropomorphized animals, that is, with human habits and qualities. And this needs to be reinforced by the scriptwriters and comics writers in their everyday acts – this is how the public identifies with the character. So Donald does as any man normally does, wrapping a towel around his waist when he gets out of the shower.

Also, until a few decades ago, it wasn’t easy to graphically indicate, either in the comics or in animation, the appearance of something wet (in this case, Donald’s fluff after bathing). So the towel around his waist is a way to reinforce the idea that he has just stepped out of the shower without requiring the illustrator to spend a lot of time on details.

Another inconsistency straight out of Patopolis: why does Donald have a duck’s voice, and Daisy doesn’t?

Behold: Donald Duck’s first girlfriend was not Daisy. Before she appeared in 1940, Donald was flirting with Donna Duck, who was also angry and had a duck voice – both were dubbed, in the animations, by Clarence Nash. Daisy appeared to counterbalance the duck’s anger by bringing moments of calm and serenity, and her soft voice was part of this.