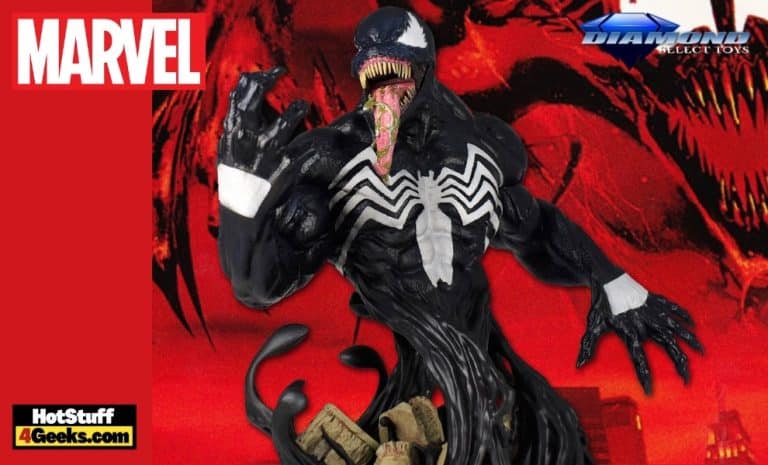 Based on his Marvel Comics appearance comes the Marvel Comics Venom 1:7 Scale Bust by Diamond Select, featuring one of the most popular villains and antiheroes of our beloved Spider-Man.

Venom is an alien symbiote who used Spider-Man as a host for some time. Spider-Man believed that it was only a uniform that gave him new abilities. But when he realized that his personality had changed, becoming more aggressive, he discarded the costume, freeing himself from the symbiote’s grasp.

When the hero managed to expel him, the monster built up a huge grudge, looking for other hosts to take revenge. The alien planned his revenge through journalist Eddie Brock, who blamed Spider-Man for the failure of his career.

Venom has a very close love-hate relationship with Spider-Man. While he would love to be connected to him, he also wants the pleasure of murdering Peter Parker.

Rising from a swirling mass of alien symbiote, his tongue extended, Venom gets his own portrait sculpture in this 1:7 scale, approximately 6-inch resin bust. In a Gentle Giant Ltd. release, this limited edition bust comes packaged in a full-color box with a certificate of authenticity.

Only 2,000 pieces will be made! It was designed by Nelson X. Asencio, sculpted by Juan Pitluk.

Marvel Comic Venom 1/6 Scale Mini-Bust by Diamond Select is now available for purchase at the links below. This figure is priced at $109.99, and it’s expected to be released in October 2021. 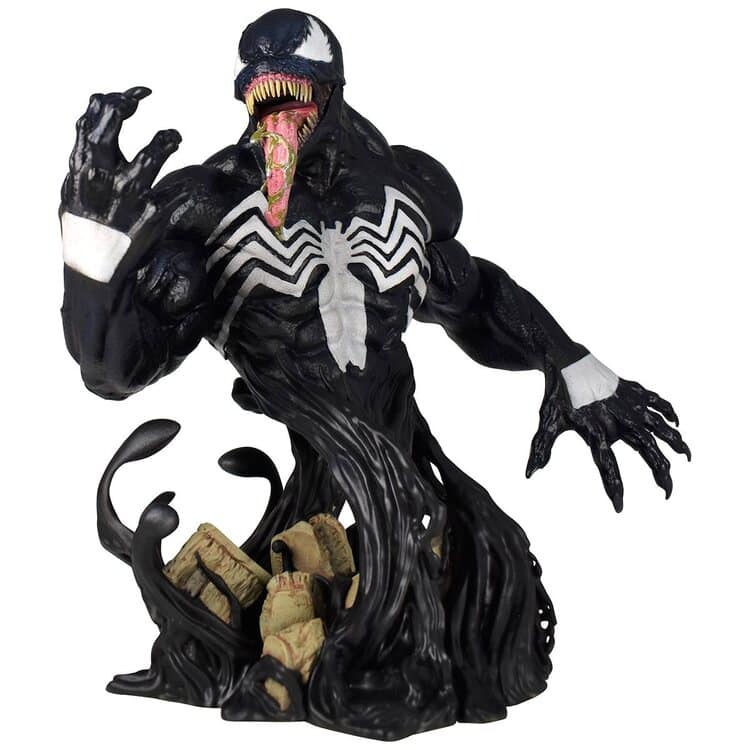 The Venom symbiote has not always been Spider-Man’s enemy or an item in his closet. Its origin is associated with a distant planet in the Andromeda galaxy called Klyntar. Venom is a member of an alien race of symbiotes named after his home planet.

The planet Klyntar was a cold and savage world where the law of the strongest ruled. In this environment lived the Klyntar, who, at the beginning of the species, bonded with smaller animals, giving these creatures a better chance of survival on this cruel planet while at the same time being more protected.

As the Klyntar race evolved, this feeling of helping other species through symbiosis intensified. The Klyntar then founded the Agents of the Cosmos, an order of noble warriors who would keep the peace throughout the universe. To do this, they would bond with worthy hosts from several different races, bringing them into the collective consciousness of the Klyntar.

However, the hosts did not always prove themselves worthy and used the powers of the symbionts for evil purposes. The Klyntar who bonded with evil hosts would eventually become corrupted, also becoming evil creatures dependent on negative emotions. These members of the race were then disconnected from the collective consciousness.

The corrupted Klyntar abandoned the purposes of the Agents of the Cosmos and began to live as parasites. They bonded with other beings, forcing them into extreme situations to feed on adrenaline. This was done until the host dried up, dying of so much stress. After the host died, the symbiont would seek out another victim.

Venom was one of the klyntar to bond with an unworthy host. His first host used the powers of the symbiont to decimate the entire population of a planet. After this, Venom turned into a rabid predator. However, Venom maintained his instinct to protect his hosts.

This, however, was not enough to redeem him in front of his species, who imprisoned him and sent him to Battleworld.