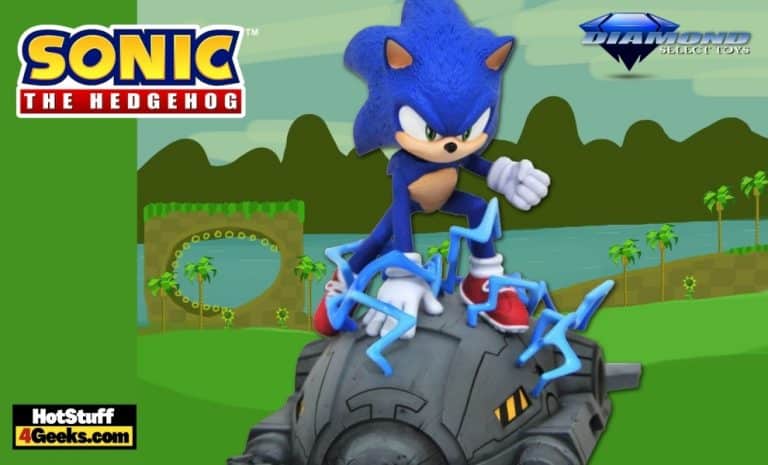 Sonic the Hedgehog is the most important franchise in SEGA’s history. Since the release of the first game in June 1991 for the Mega Drive, the most famous hedgehog has won millions of fans worldwide – and remains a pop culture icon to this day.

Based on SEGA’s world-renowned game franchise, Sonic: The Movie tells the story of the world’s fastest hedgehog as he adapts to his new home on Earth. In this live-action adventure comedy, Sonic and his new best friend Tom (James Marsden) must team up to defend the planet from the evil genius Dr. Robotnik (Jim Carrey) and his plans for total domination.

This Sonic the Hedgehog Movie Gallery PVC Diorama is sure to go fast! Based on the hit movie, this approximately 5-inch sculpture shows Sonic standing on one of Dr. Robotnik’s drones, about to take off in a burst of speed, lightning crackling around him.

Sculpted in a 1/6 scale, this statue features detailed sculpting and paint details. Designed by Joe Allard, sculpted by Varner Studios.

Sonic: the Hedgehog Movie – Sonic 1:6 Scale Statue by Diamond Select is now available for purchase at the links below. This figure is priced at $44.99, and it’s expected to be released in October 2021. 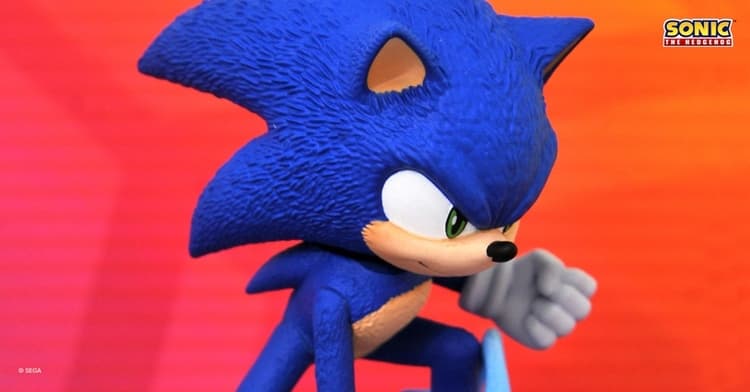 In the beginning, Sonic, who is a blue hedgehog, was once mistaken by some as a cat. However, as the speedster gained fame, his recognition among gamers also changed. Created by SEGA to be the company’s mascot, Sonic hit the market in the mid-1990s.

In the effort to create a mascot that would stand up to its biggest rival, Nintendo, SEGA had the support of Naoto Ohshima, character designer, and Yuji Naka, programmer. To close this team that would soon create a great success, Hirokazu Yasuhara, game designer, joined the duo. Thus was formed the Sonic Team.

So began the challenge of creating a mascot for SEGA that was as big and famous as Mario Bros was – and still is – for Nintendo. The trio knew that Sonic’s game needed to be exciting and provide something new to succeed. In addition, it needed to differentiate itself from Mario in some way.

It was Yuki’s idea to put speed as the focus of the story. According to him, his wish was for other games to be more fun and for the characters to move faster. And because of this desire, Yuki almost single-handedly programmed a new method of scrolling the bottom of the screen to give the game more speed.

Next, the challenge was to create a game using this new technology. The first idea was a rabbit that could pick up objects with its ears and hit its enemies. However, it was discarded because they believed it would be too complex and the game would be closed to big players only.

Again Yuki was the one who came up with the idea. He proposed that the character should be able to attack his enemies without stopping his running, like being able to roll up like a little ball. This way, the whole game could happen quickly without being restricted to more experienced players.

From this idea, Ohshima drew two different characters. An armadillo and a hedgehog. In a vote, the team chose the hedgehog. The body covered with spines gave it a more aggressive look. Also, he was made in a blue color to match the SEGA logo.

Finally, the blue hedgehog just needed to be given a name. Sonic was chosen by the three of them near the end of the project.

After much hard work and the quest to outdo the greatest, Sonic the Hedgehog was released. The date was June 23, 1991, and from that moment on, SEGA achieved success in the old 16-bit era. Nakayama, until then president of the company, who wanted Sonic to be his Mickey, ended up achieving something bigger.

That’s because in 1992, among children between the ages of 6 and 11, Sonic became more recognizable than Mickey. And even years after its release, the game continues to sell millions of copies all over the world. And the success is not only on consoles.

Sonic has also had more than 150 million downloads in his smartphone games. In addition, the character even got a cartoon that originally aired on Cartoon Network. Finally, in 2020 the blue hedgehog got a live-action on the big screen.