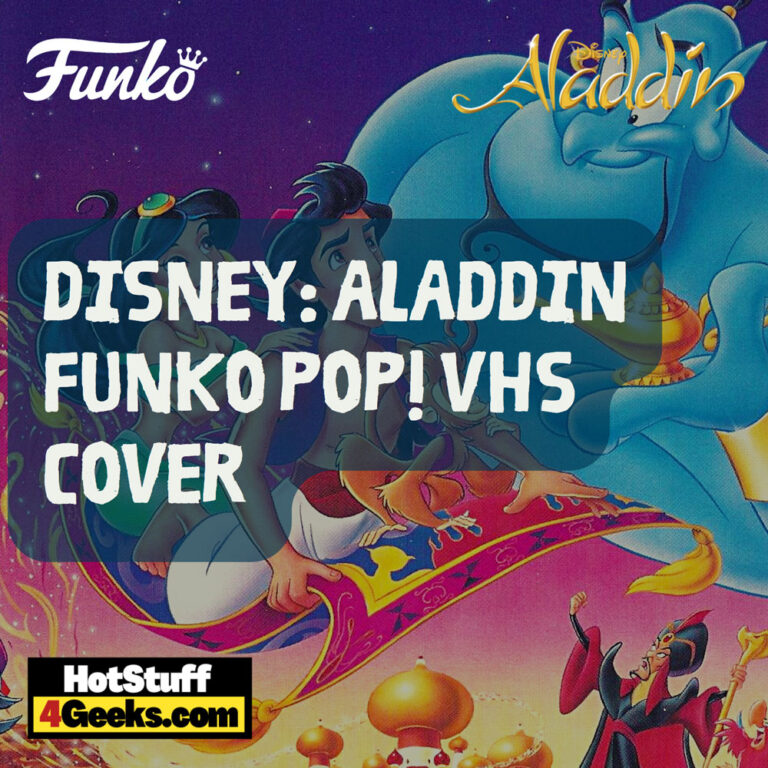 Aladdin is a timeless masterpiece. The film was released in 1992 and is still just as relevant today as it was.

The story follows Aladdin, a street urchin who discovers a lamp that contains a genie.

The Genie grants Aladdin three wishes, launching him on an unforgettable journey of discovery and adventure to win the hand of Princess Jasmine.

Along the way, he must outwit the evil Jafar, determined to use the lamp for his own nefarious purposes.

Aladdin is a classic Disney film that features wonderful songs, delightful characters, and thrilling action scenes. So it is no wonder the film remains popular with audiences of all ages.

The Amazon Exclusive Aladdin VHS Cover Funko Pop! is an unconfirmed release. It is only official when or if Funko announces it. I’ll update more information in the long run.

Alladin is bold from start to finish.

The film, directed by the geniuses Ron Clements and John Musker, respects the foundations of the story narrated in the One Thousand and One Nights, with all the usual Disney charm, but goes a step further – both in violence and malice.

It features a wisecracking protagonist, a strong female character, amusing pets, a wicked villain, and the Genie, played with the same genius by Robin Williams.

It is impressive how the story of Aladdin manages to entertain in every sense.

It makes us tense, laugh, cheer, fall in love, and even be scared. It is a mix of emotions packed with an involving soundtrack, a showy technical quality, and an enervating and captivating story that never lets its audience get tired.

Watching the 1992 Aladdin thirty years later, I rediscovered the power of a well-told narrative with skillful hands.

I highly recommend it.