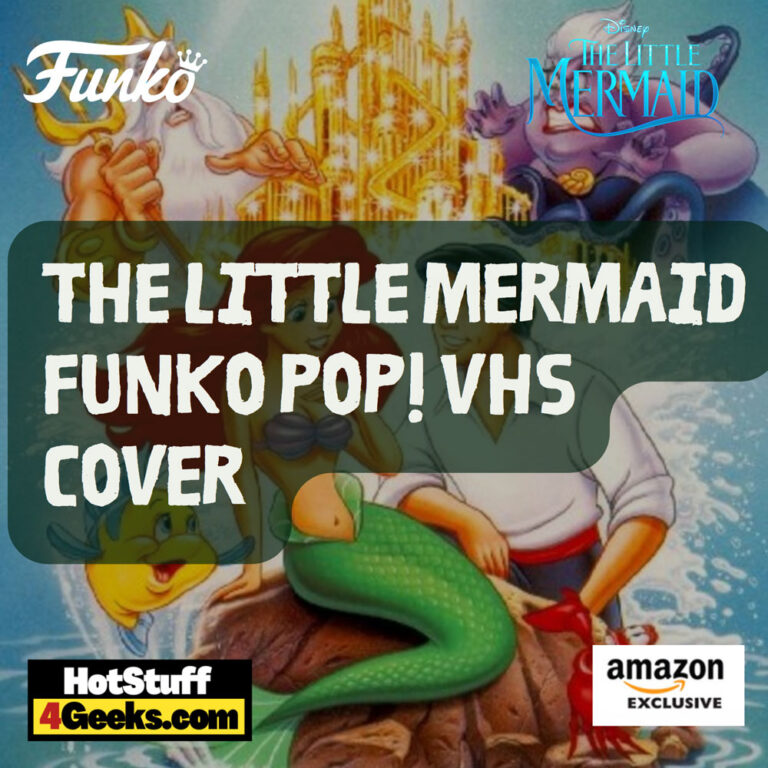 The movie was a big hit when it was released,  and its theme of following our dreams has inspired many people. It has since become a classic.

Ariel is a mermaid princess fascinated by the world of humans, but her father, King Triton, forbids beings from the bottom of the sea to have contact with those on land.

The young girl feels like a prisoner of a tyrannical father.

After she saves human prince Eric from a shipwreck and falls in love with him, she is seduced by the promises of the villainous Ursula and falls into a trap set by the witch to overthrow Triton from the throne.

The Little Mermaid is a classic of classics that deserves its place in the pantheon of Disney’s best works.

Considering what the company had produced before and would produce after, this is not a very easy feat to achieve.

The Amazon Exclusive, The Little Mermaid VHS Cover Funko Pop! featuring Ariel is an unconfirmed release. It is only official when or if Funko announces it. I’ll update more information in the long run.

Ariel, who lives collecting objects from humans at the bottom of the sea with her friend Flounder, is the young dreamer who, faced with danger, stumbles upon the love of her life.

To the dismay of Sebastian, the king’s advisor and unwilling babysitter to the girl, this immediate infatuation is exploited by the villainous sea witch for personal gain.

The film is a triumph in character design, blending classic elements such as King Triton’s underwater city, designed with all pomp and circumstance, through to the characters themselves.

Suppose it’s hard enough to forget Ariel, with her huge glowing eyes that long to embrace the world with voracity.

But what about the film’s supporting actors, particularly Sebastian and Samuel E. Wright’s unbeatable voice work?

Even the less iconic characters, like Scuttle the seagull or Sebastien the crab, are designed with such fun and whimsy that it’s impossible not to fall in love with them.

There’s also the unforgettable Ursula, who combines the “blues singer” style with an octopus, and her two morays, Flotsam and Jetsam, each with an impressive lighthouse-like eye, is the perfect foil for her shenanigans.

The film’s colors are also utterly captivating, from the bright blues and greens of the underwater world to the eerie oranges and purples of Ursula’s cave.

And let’s not forget about the iconic music by Alan Menken. There’s not a single song in this film that isn’t instantly catchy and memorable.

“Under the Sea” and “Kiss the Girl” are still beloved by fans today.

Everything is designed to enchant. In short, The Little Mermaid is a timeless classic that deserves to be revisited again and again.