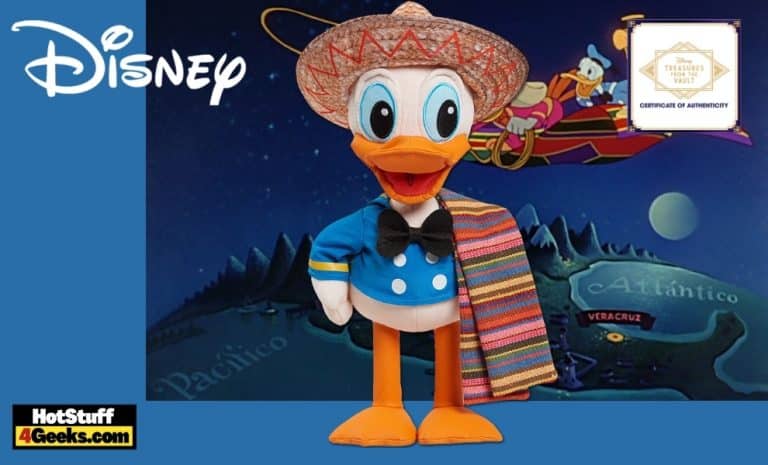 Relive the magic of Disney with the new Disney Treasures from The Vault: Donald Plush – Amazon Exclusive.

When World War II was raging, Walt Disney decided to travel with a group of cartoonists and musicians to South America in search of inspiration for his new animated films. Their journey gathered information later portrayed in Saludos Amigos (1942) and The Three Caballeros (1944).

Donald Duck has a birthday, and for the occasion, he receives a big box with a card signed by “his friends from Latin America.” The excited feathered man opens one of the packages that takes him on a fun ride through the Southern American villages…

Inspired by Disney’s classic character, the Limited Edition Donald Duck is the fifth collectible character in this exclusive Amazon series. Standing 14.5-inches tall and made of soft fabric with embroidered eyes, Donald Duck is wearing his sombrero and serape as featured in Saludos Amigos and The Three Caballeros.

He even includes a Certificate of Authenticity and comes in a window box featuring exclusive Disney Vault packaging with gold foil detailing. Ideal for collectors. Donald Plush from Disney Treasures, exclusive to Amazon is now available for purchase at the links below. 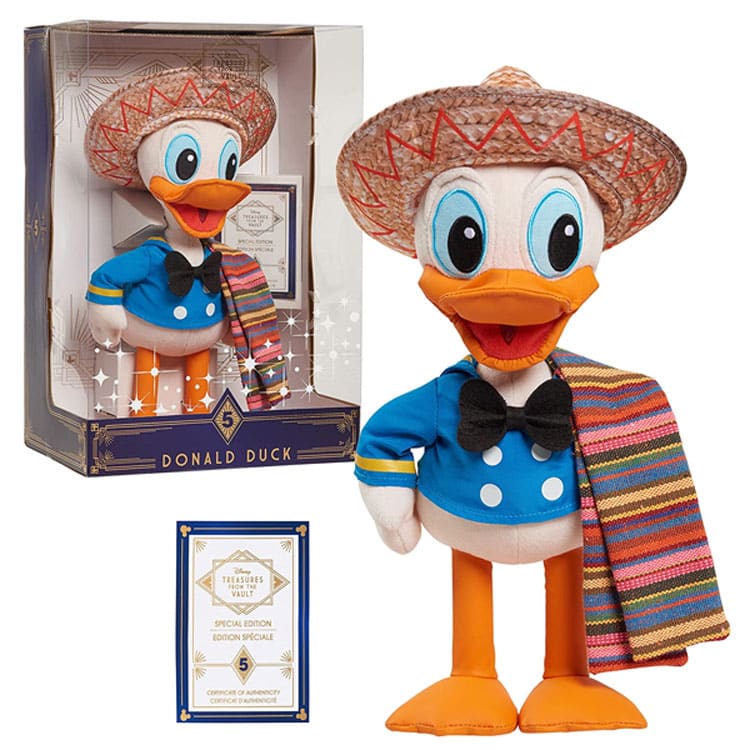 This duck is known for his explosive temperament, humorous voice, and the particular mannerisms of someone who quickly gets out of control. But while he can be somewhat selfish and loud, he is a highly loyal character who will do anything to help a friend in trouble.

The story goes that Walt Disney was inspired for his creation when he heard actor Clarence Nash recite a children’s poem in a duck voice. Sometime later, Disney asked his team of animators to create a character to match the voice.

The cartoonist and animator Dick Lundy drew the first sketches of this character destined to be one of the leading figures of the Disney factory. That is how Donald Fauntleroy – Donald Duck’s first name – made his first appearance in 1934 in the animated short movie “The Wise Hen.”

In his first years of life, he continued to be a guest in the adventures of other more famous characters, such as Mickey Mouse, or shared the limelight with Pluto. Still, in 1937 and after his remodeling, “Don Donald” was released, the first short movie in which he was the main star.

In that first solo adventure, his girlfriend Daisy appeared for the first time. Together with his nephews Huey, Dewey, and Louie – who would make their debut a year later -, and his uncle Scrooge McDuck -created in 1947- form the Disney family of ducks, who live in Duckburg.