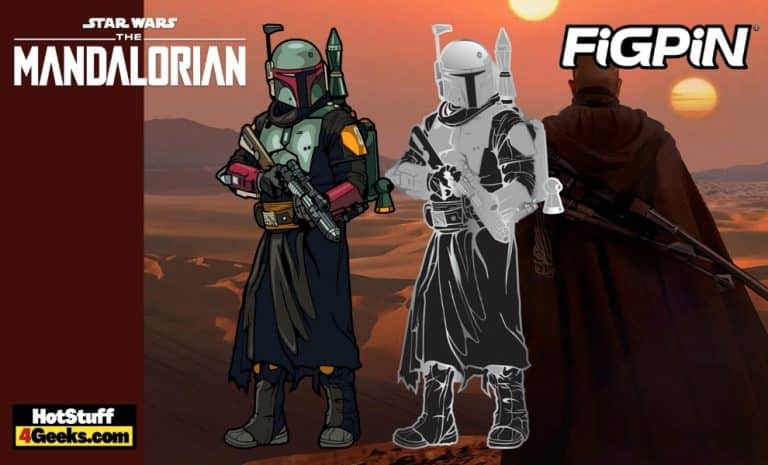 No Star Wars collection is complete without the merciless bounty hunter Boba Fett. Geared up in armor as seen in The Mandalorian, Boba Fett FiGPiN is ready to join your collection:

The full-color version Boba Fett #734 is a FiGPiN common. Boba Fett #737 is a black and silver Limited Edition variant. This variation is limited to just 2k pcs and is guaranteed never to be made again.

Created in 1978 for the infamous Star Wars Christmas special, the character first appeared in an animated feature that featured Luke, C-3PO, and R2-D2 on a mission to find Han and Chewbacca on a barren planet.

Despite the tragic reception to the special, Fett’s looks, as well as his ability to outwit both the former smuggler and the future Jedi, wowed fans, and it wasn’t long before the character gained prominence in the Expanded Universe and became one of the most sought after figures by collectors.

Star Wars – The Mandalorian Boba Fett Classic Enamel Pin #737 and #734 by FiGPiN are now available for pre-order at the links below (click to jump!) They’re set to be shipped in August 2021. 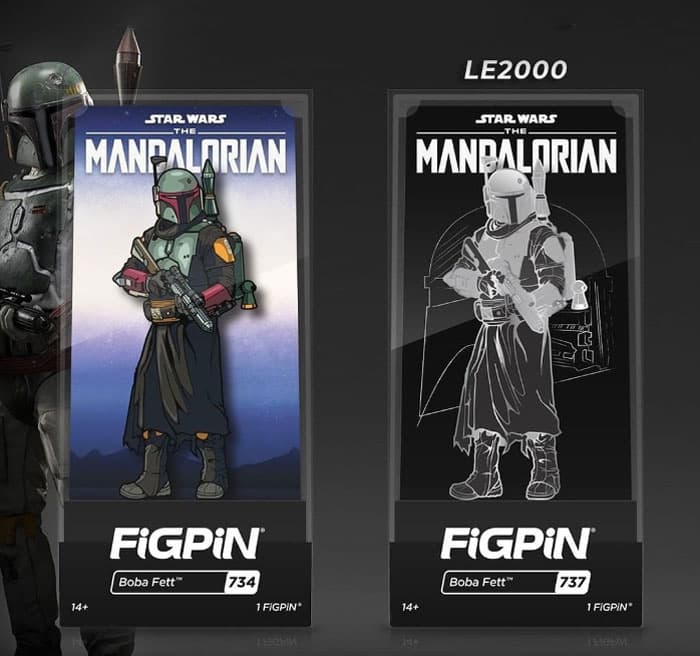 His reputation as an evil villain and strategist only increased when, in 1980, Boba appeared again in The Empire Strikes Back. Hired by Darth Vader alongside other bounty hunters, Fett tricks Han and Leia into capturing the captain of the Millennium Falcon and taking him to Tatooine to sell him to Jabba.

In The Return of the Jedi, however, fans of the character would have their hearts broken for the first time.

Now part of Jabba’s court on the desert home planet of Anakin and Luke Skywalker, Boba Fett has no lines in The Return of the Jedi. Unlike the great strategist of the previous film, the bounty hunter lets Lando infiltrate Hutt’s guard and is still easily fooled by Princess Leia when she uses a disguise to rescue Han from hibernation in Carbonite.

To make matters worse, Fett apparently dies in an undeniably stupid way: by accident, Solo hits his jetpack, and, after an out-of-control flight, the imposing bounty hunter slams his face into Jabba’s ship and falls straight into the Sarlacc’s mouth.

Still, fans didn’t give a hoot. Between 1983, the year Episode VI was released, and 2002, when Attack of the Clones would hit theaters, Boba continued to star in Expanded Universe stories and fanfics that theorized his unlikely survival and escape the bowels of the Tatooine creature.

The promotional art for Episode II only added fuel to the fire: while photos showed a platinum version of Boba’s armor, creator George Lucas confirmed that the feature would introduce the character’s father, Jango Fett, and tell his origin.

The speculation, expectation, and curiosity of the fans were once again met with disappointment. Revealed as nothing more than a clone of Jango, Boba was still portrayed by Lucas’s script as a naughty, awkward child.

The mixed reception to the film was just the final nail in the coffin of the Fett introduced 24 years earlier, who, far from being the dangerous villain fans had hoped for, would spend nearly a decade buried by the franchise.

With a more active role as producer on the second season of The Mandalorian, created by Jon Favreau for Disney+, Dave Filoni helped Favreau and colleague Robert Rodriguez develop a Boba Fett incredibly close to the one created by fans’ imaginations.

In an absolutely triumphant return, the character, now played by Temura Morrison (Jango Fett from Attack of the Clones), defeats stormtroopers with a gaffi stick, flamethrower, missiles, and blasters, finally justifying the great warrior status he has always had in fandom.

In the following weeks, Fett showed himself to be an honorable character as well. Finally, despite showing fatigue from a life of battles and death, Boba remained, for the last few weeks of the show, unbelievably faithful to his promise to Din Djarin, crossing the galaxy with him to rescue Grogu/Baby Yoda from the hands of Moff Gideon.

With the season finale of The Mandalorian and the announcement of the spin-off series, The Book of Boba Fett, the characters’ possibilities are endless. The only certainty is that the reputation created by his impressive looks 42 years ago has finally been redeemed, and not even a new plunge into a Sarlacc’s stomach can destroy it again.