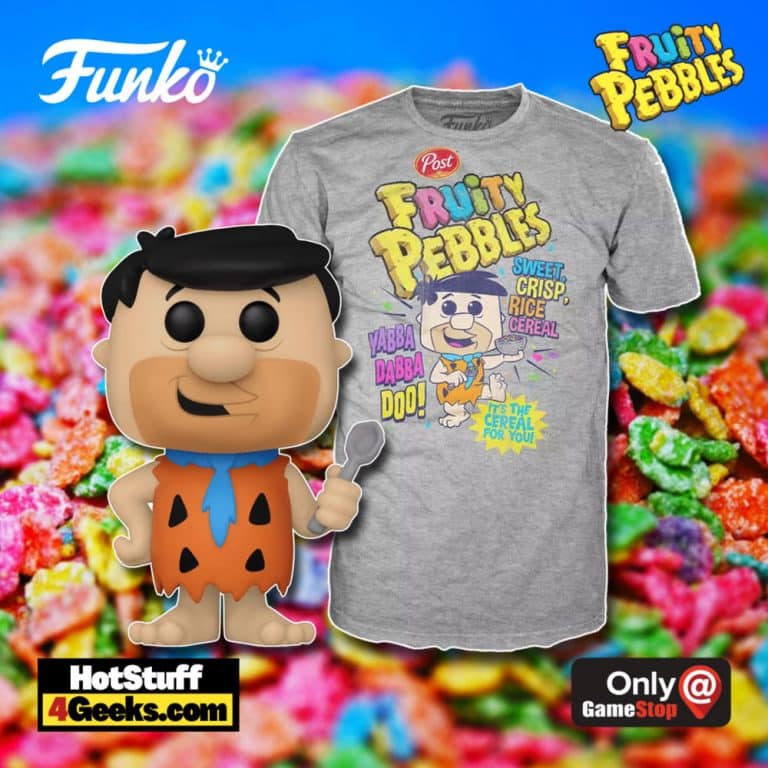 No one in Bedrock will question your love of Fruity Pebbles when you show up for breakfast with the new Funko POP! Ad Icons: Fruity Pebbles Fred Flinstone with Spoon Funko Pop! and Tee Vinyl Figure – GameStop Exclusive.

Pebbles cereal is an all-time breakfast classic that families have enjoyed for 50 years. Launched in 1971 after Post obtained licensing rights from Hanna-Barbera, Pebbles cereal was the first brand created around a character from a television show.

One of the most revered cartoons of all time, “The Flintstones” ran on prime-time television from 1960 to 1966, and the characters have returned in countless specials and movies. The cereal is named after Pebbles, the daughter of Fred and Vilma Flintstone.

Start your day with a delicious bowl of Fruity Pebbles and Fred Flintstone! Fred is an outspoken advocate for the fruity-flavored breakfast cereal.

Funko POP! and Tee: Fruity Pebbles Fred with Spoon is now available for pre-order at the links below (click to jump!) Also, don’t forget to check more images of this great Pop! and Tee right down. 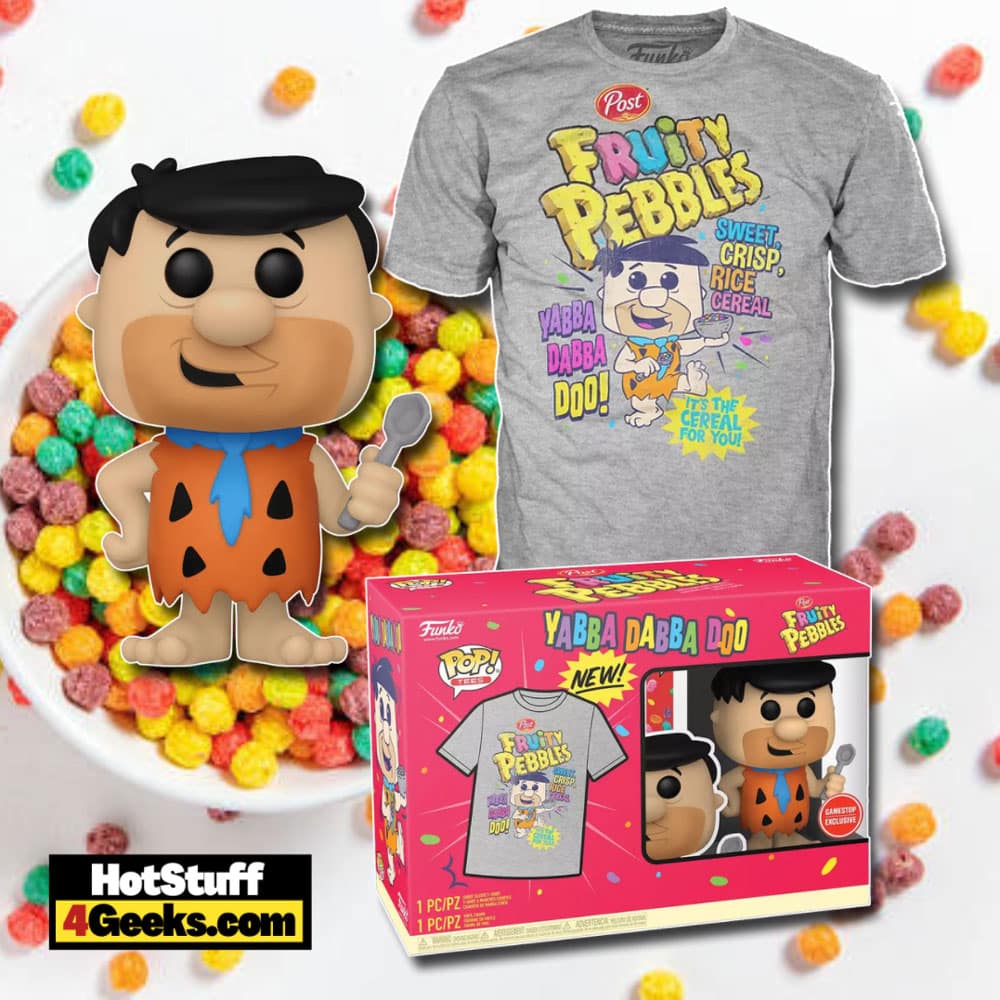 More than 60 years ago, Fred Flintstone, in his orange robe, first shouted the mythical expression “Yabba Dabba Doo!”The series “The Flintstones” premiered at 8:30 pm on September 30, 1960, on the American station ABC. Quickly the stories of the families in the Stone Age, using dinosaur-powered dryers and cars and feline clothing made a furor, despite the lack of historical accuracy.

For decades, the Flintstone family was the most-watched animated series in the world, eventually losing its throne in 1989 to another, more modern American family: the Simpsons. The series went through several remakes and a few movies, with increasing improvements in production, and never completely disappeared, continuing to be broadcast to this day. 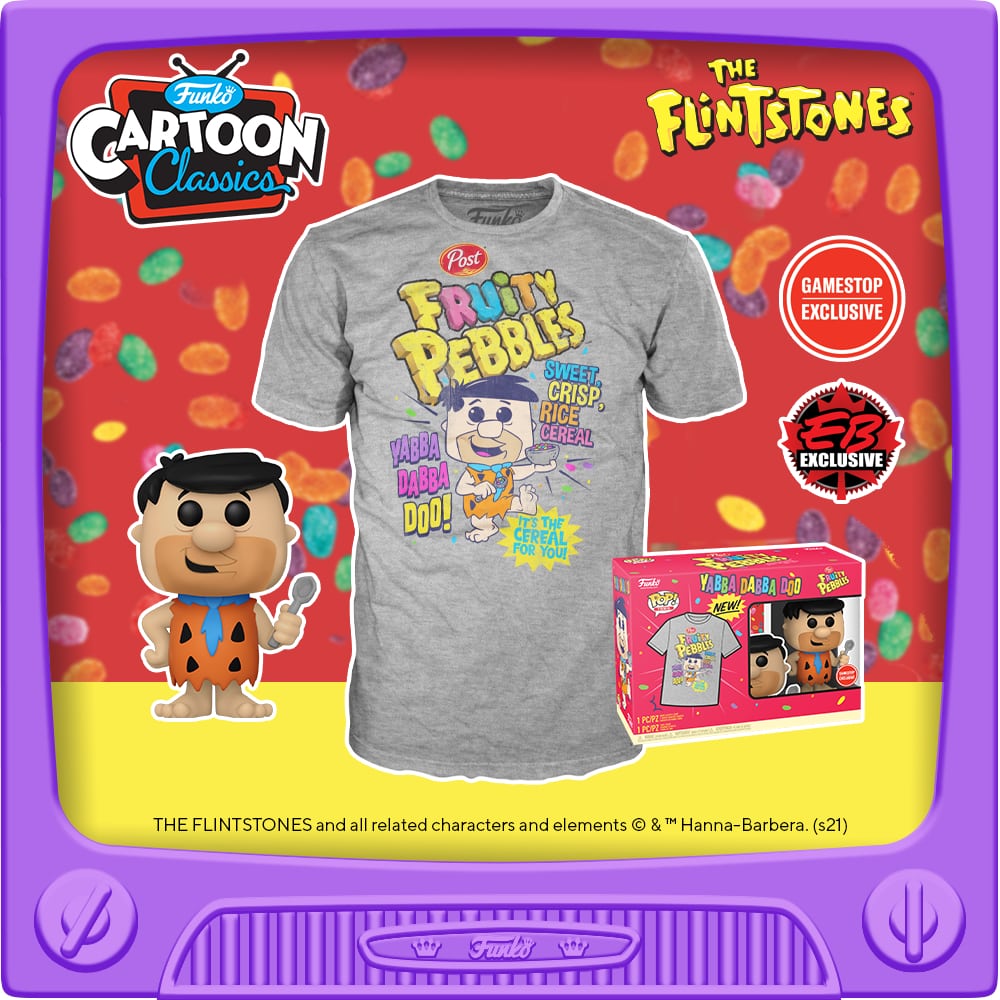 Funko POP! and Tee: Fruity Pebbles Fred with Spoon is now available for pre-order at the links below (click to jump!)

The concept for The Flintstones is simple: imagine life in the 20th century, adapted to a time when technology was supposed to be all about knocking on rocks to make fire. So Fred Flintstone, his wife Wilma, their daughter Pebbles, and their pet dinosaur Dino went to drive-in movie theaters in a car made of logs, and the trendy fast food was brontosaurus chops.

There was also room for parodies of well-known brands. For example, the cameras were the “Polarock” (playing with the iconic Polaroid), the pianos were the “Stoneway” (from the reputed Steinway piano brand), and the faucet for washing the dishes was operated by a mammoth.

The stories in the town of Bedrock may not be seen as much as they once were, but they will certainly never be forgotten. Today the Flintstones can still be seen on streaming platforms such as Amazon Prime.