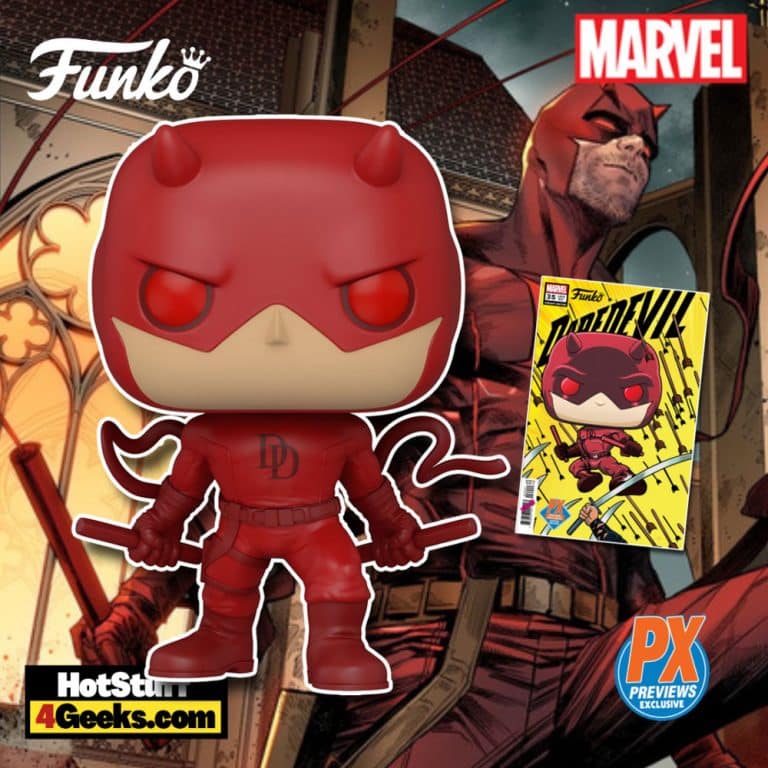 From Hell’s Kitchen NYC comes Matt Murdock, AKA Daredevil! He helps stop injustice as a lawyer by day… and as Daredevil by night!

The Daredevil was one of the first Marvel heroes to actually achieve success in the TV universe, after a series that ran for three seasons on Netflix. The actor will return in Spider-Man: Far From Home, but instead of appearing as Daredevil, we will see him only as Matt Murdock, Peter Parker’s lawyer, trying to prove his innocence in Mysterio’s death.

The Man Without Fear is ready to take on any foe with his signature batons in this Previews Exclusive figure from Funko. You can purchase the Pop as a standalone figure, or you can get it bundled with a copy of Daredevil #35 with the variant cover. 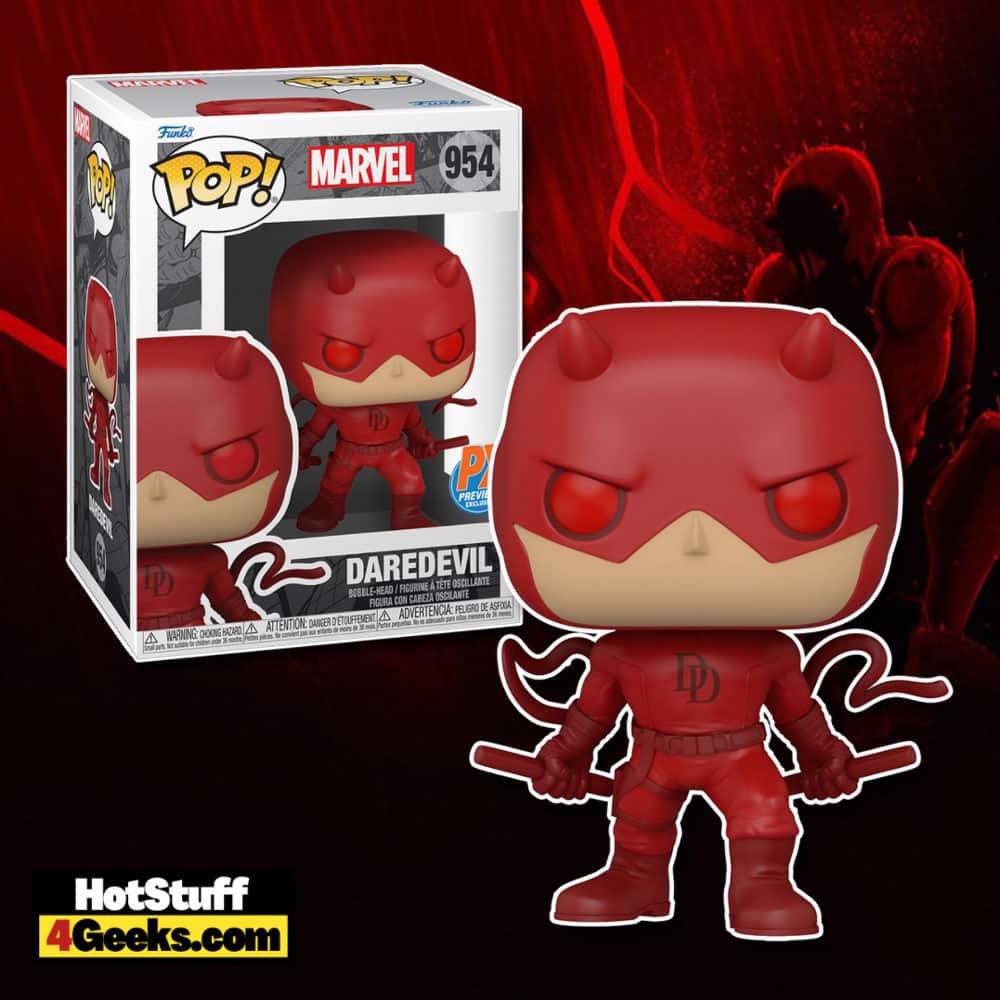 Matthew Murdock is known as the Man Without Fear in Marvel, but how did a boy become the superhero that many admire?

Matthew Murdock was raised alone by his father, Jonathan ‘Battler’ Murdock, who told him that his mother had died. Matthew’s father led a hard life with his low pay as a boxer and used his fighting talent in dirty jobs for the mafia.

Working for criminals was something Jonathan was ashamed of, and he always wanted his son to be different from him. Believing that education would be the key to Matt’s success, Jonathan made his son promise to be wholly dedicated to his studies.

Matthew studied constantly and became an easy target for bullying, prevented from playing with other kids on the streets or playing a sport. His classmates at school thought he was a coward, but Matt secretly trained with his father’s equipment when he was away. 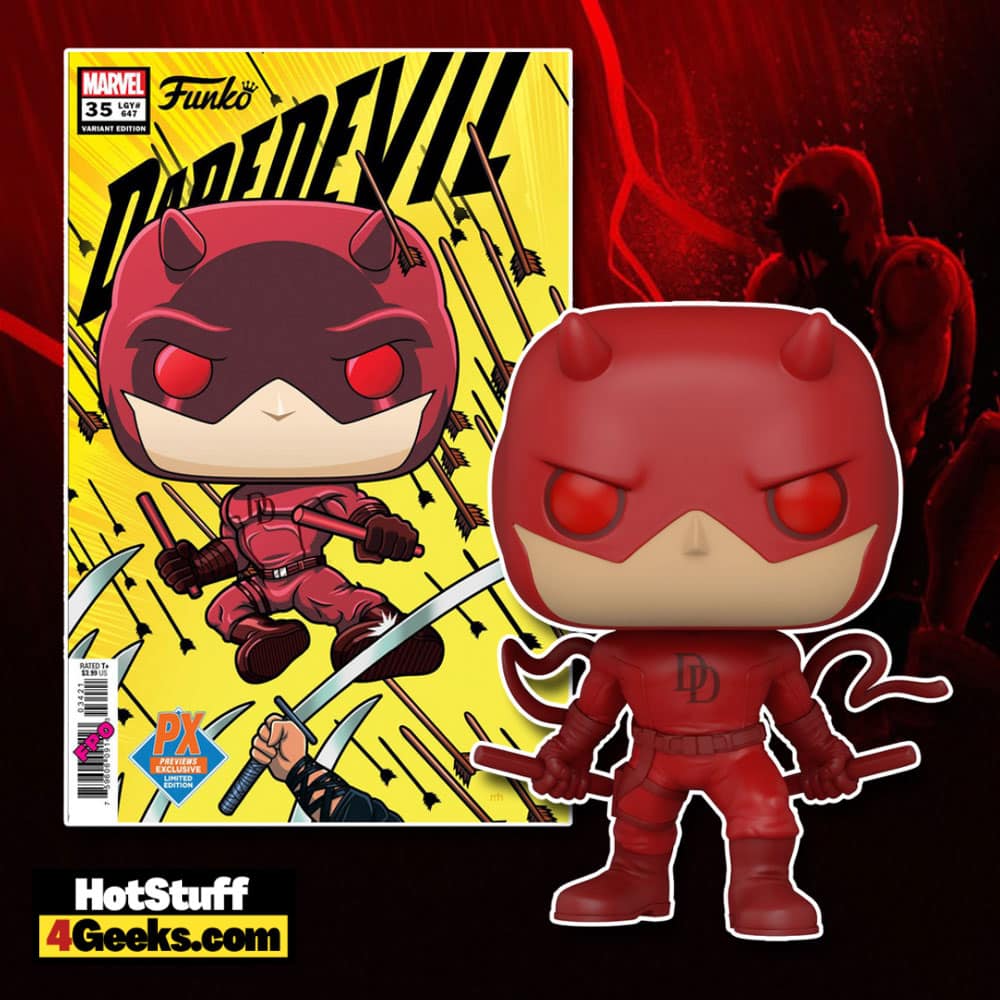 Daredevil PX Previews Exclusive Funko Pop! is now available for pre-order at the links below (click to jump!)

Matthew saw that a blind man was about to be hit by a truck on the day that would change his life forever. His heroic spirit had its first show of courage here when Matt pulled the man away from danger.

But in the manner of the traditional superhero origin story, the truck was carrying a toxic radioactive substance that fatally struck Matt.

The accident would render Matthew blind, but all his other senses would be heightened to superhuman levels. Another surprising side effect emerged: he developed something akin to a “biological radar” that gives him insight into the environment and people around him.

Blindness and new powers were deeply traumatic for Matt, who didn’t know how to cope with this new life. It took the intervention of Stick, a martial arts master, to guide Matthew through this dramatic time.

Stick would teach Matt all about controlling and mastering his abilities and training him in martial arts, acrobatic skills, and developing his talent for combat. 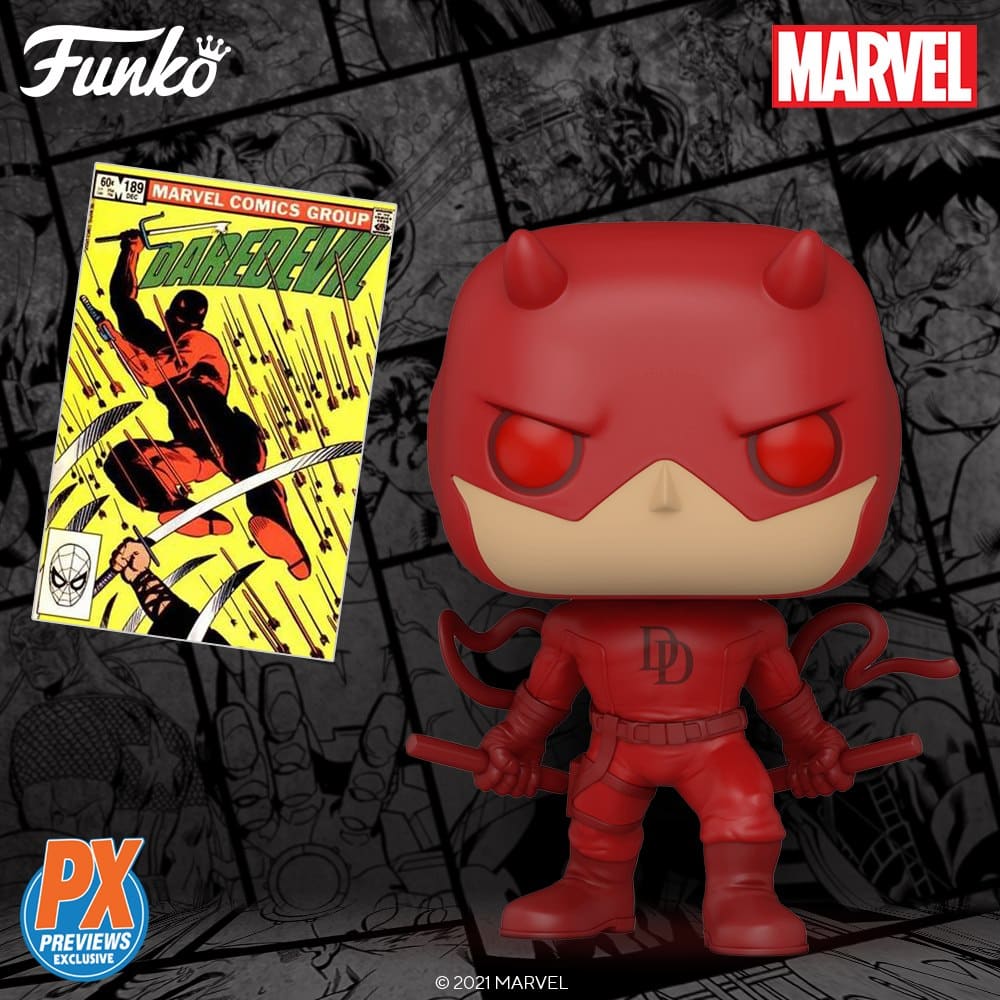 Daredevil PX Previews Exclusive Funko Pop! is now available for pre-order at the links below (click to jump!)

Daredevil’s story is not complete without his best friend and his first (and most iconic) love. Keeping his promise to his father, Matt continued to be an excellent student, and not even the accident kept him from his goals.

So he entered Columbia University, where he would major in law and meet Foggy Nelson and Elektra Natchios.

Foggy quickly became Murdock’s best friend, with Matt protecting his friend from the bullies who tormented him. The friendship proved so strong that together they opened their law firm called “Nelson and Murdock.”

Elektra was a student coming from Greece to study at Columbia University, and the attraction between her and Matthew was immediate. They were genuinely happy together, sharing a passion for danger and living a romance filled with adrenaline and excitement.

But their love story would meet its (first) end when Elektra’s father died, and she decided to abandon everything and start her life over from scratch.

Daredevil’s first mission was to find the men who had killed his father. His uniform (initially yellow) was made from his father’s boxing robe and had only a D on the chest. Murdock pursued Fixer’s mercenaries and narrowly left them alive, then found the mastermind of the crime.

Fixer pointed a gun at the Blaster, but before Matt could take action, the mobster suffered a heart attack and died.

Slade, the man who had murdered Jonathan, eventually confessed the crime to Daredevil. The hero turned the criminal over to the authorities, and Slade was brought to justice, where he was found guilty.