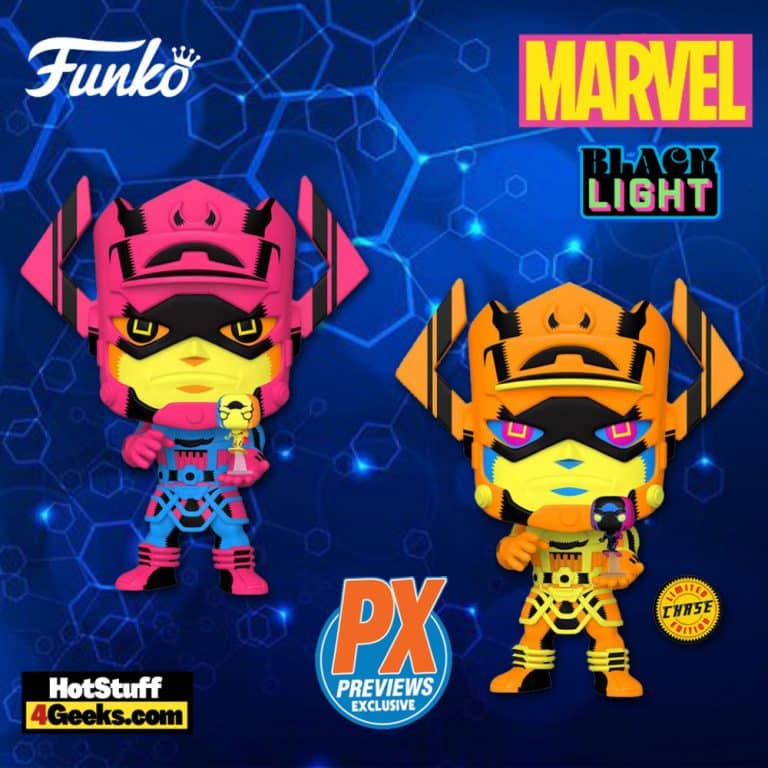 Galactus is ready to devour some planets in this Jumbo-sized PX PREVIEWS Exclusive Galactus with Silver Surfer Black Light Funko Pop! Vinyl figure! The classic Galactus and his herald, the Silver Surfer, are sure to loom over any collection, seeking out and consuming worlds at will.

It features iconic square pupils, a pink helmet, purple armor, and black lighting accents. Plus, look out for a chase variant featuring a black light paint application for an eerie cosmic glow.

Galactus, one of the most interesting cosmic beings in the Marvel universe, is a character who first appeared in 1966 in the #48 issue of the Fantastic Four comic. He was created by Stan Lee and Jack Kirby. He used to be a mortal but was transformed into a cosmic entity who originally devoured planets to maintain his life force. 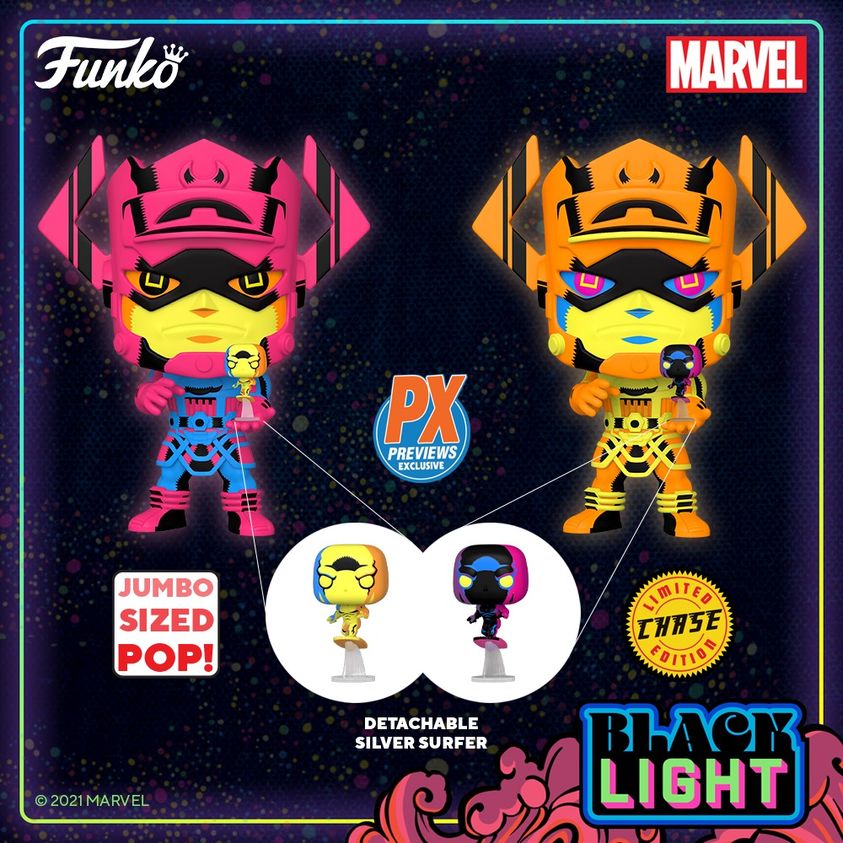 Galactus is the sole survivor of a natural phenomenon that wiped out his entire universe. He was a humanoid, Galan, born on Earth 616 on the planet Taa, a paradisiacal world whose civilization was said to be the most advanced of the known universes. However, the Sixth Infinity and all its galaxies were on the verge of collapse due to a period of multiverse renewal.

This universe was a “cosmic egg,” a sphere of compact, dense, and disorganized primordial matter. First, this sphere underwent a kind of Big Bang, an explosion that ejected matter that eventually condensed and transformed into planets. Next, this universe expanded for billions of years and then contracted, causing cosmic instability on the planet. Finally, the matter of that universe concentrated at a central point, transforming into another cosmic egg.

The civilization of Taa was one of the last in existence, but the lethal radiation caused by the instability was killing the life of that universe. Galan, a space explorer, was sent to travel through the cosmos looking for a way to save his homeland, but he did not find a solution.

Eventually, the radiation wiped out most of the population. Galan proposed to the survivors that they die a heroic death by crashing their ships into the center of the cosmic egg. All the pilots were killed by the radiation as they approached the core, but strangely, Galan found himself filled with new energy.

When the cosmos was about to collapse naturally, Galan encountered and was rescued by the Phoenix Force. The living energy introduced him into the Cosmic Egg, and when the Big Bang occurred, the Egg exploded, creating a new universe. Galan and his spaceship were recreated. Galactus, newly “created,” was now on Earth-616.