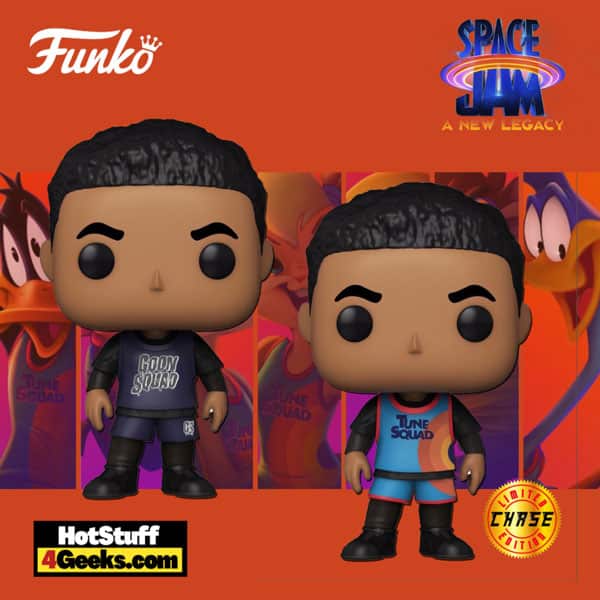 The millions of fans of the movie starring Michael Jordan in the ’90s have been waiting for this moment for a while. Space Jam has a sequel, and the main character is LeBron James.

Space Jam: A New Legacy stars LeBron James and is directed by Malcolm D. Lee. In the film, LeBron and his son become trapped in a kind of digital space created by an evil artificial intelligence.

To rescue his son, the basketball player has to play a game of basketball. It’s LeBron and the Looney Tunes – former teammates of Michael Jordan – against the Goons, the digitized champions of artificial intelligence.

Dom With Chase from Space Jam: A New Legacy Funko Pop! is now available for pre-order at the links below. It’s expected to be released in June 2021. 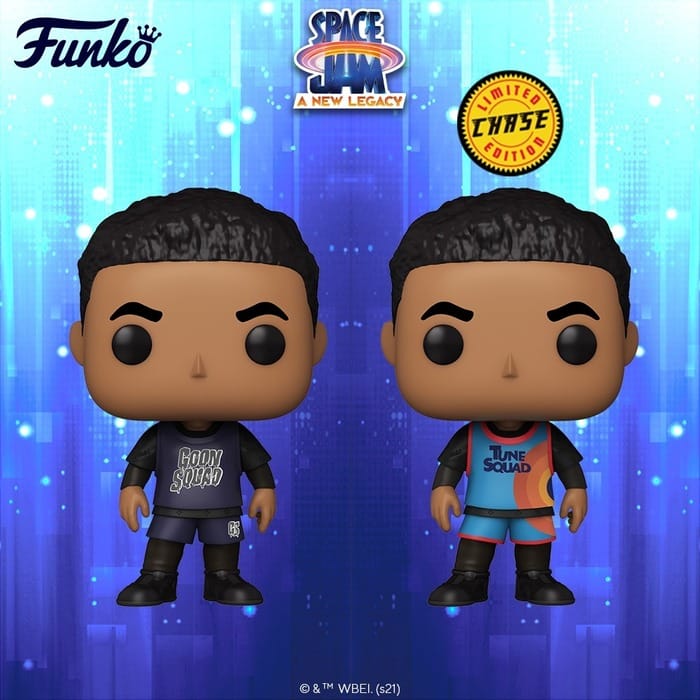 As Cine Colombia anticipates, LeBron is not the only basketball star playing the game of the 21st century. There will be a powerful roster of NBA and WNBA stars like never seen before.

Other players rumored to share the screen with the Lakers are Klay Thompson, Damian Lillard, Diana Taurasi, and Anthony Davis. 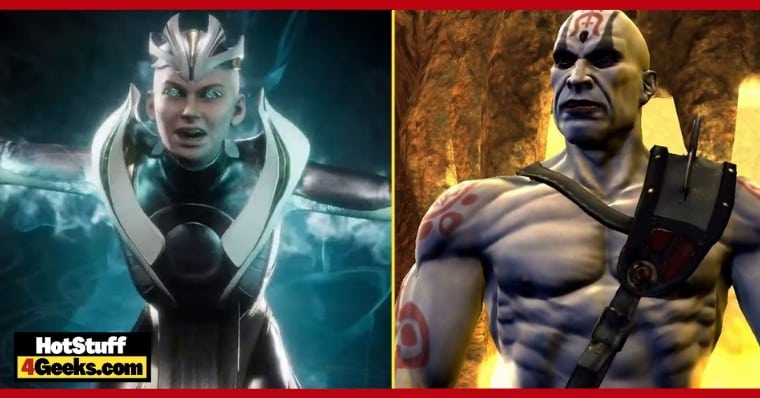 Mortal Kombat has not always had a narrative as the foundation of its experience, but the bloody battles have faithfully accompanied players over the 29 years of its journey. Among the most memorable fights, the powerful bosses challenge the players’ limits that end up going down in history. But not always for a good reason.

This list will remember the 5 best bosses that have marked Mortal Kombat fans’ memory and the 5 worst bosses that almost everyone would like to forget! 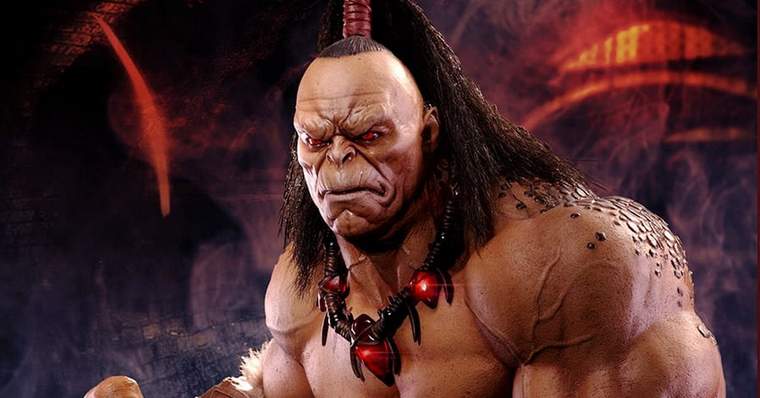 Since his debut in the first Mortal Kombat (1992), Goro has made a tangible impact on the community. Before he even appears, tremors and a chilling roar announce that this is one enemy who is not to be trifled with.

And no, he’s not! Goro can quickly wipe out your life bar with a few hits if you let him loose. His attack patterns worked so well that several enemies replicated them in later games, but none could emulate this four-armed brute’s natural charisma. 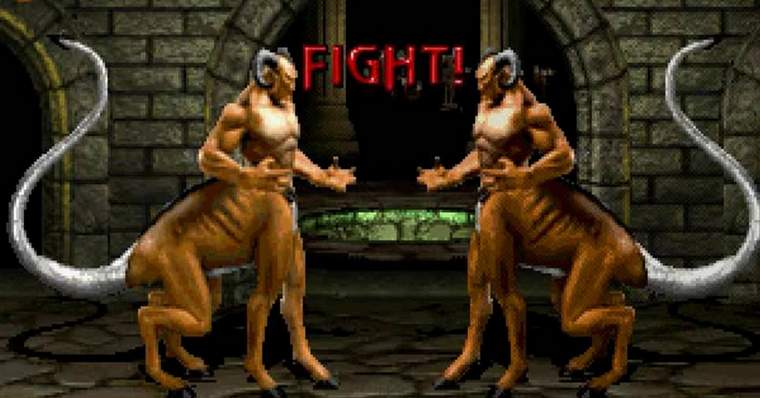 Don’t get me wrong. Motaro was extremely powerful in Mortal Kombat III (1995). The problem is that this absurd power didn’t strictly come in a fairway. For starters, he took up so much screen space that it was difficult even to move around. If that wasn’t enough, he was also able to teleport freely.

Projectiles, like Sub-zero’s freezing spheres, were automatically reflected off his body. It’s virtually impossible to fight with any distance, especially since he shoots lasers from his tail. The only thing worse than facing Motaro as a boss was his disappointing appearance in Mortal Kombat: Armageddon. 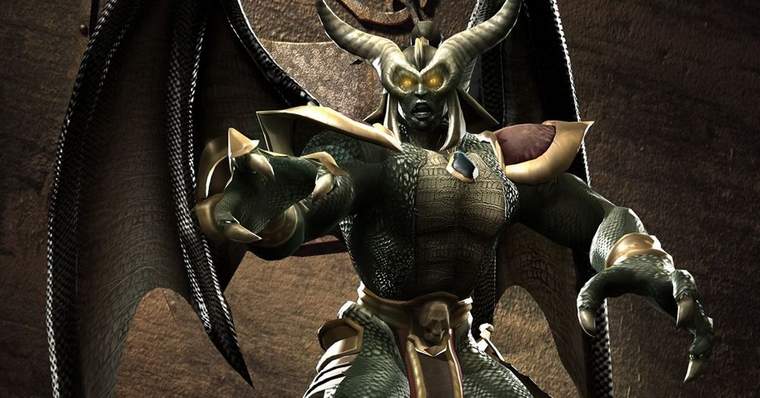 The dragon king Onaga, former emperor of Exoterra, is one of the best fights in Mortal Kombat: Deception (2004). His blows perfectly fulfill the function of controlling the rhythm of the battle, demanding a lot of precision from his opponents to be countered.

The secret to defeating him is to keep a certain distance and dodge at the right time to punish him with fast combos. Be careful not to get hit by his ground-pound if you want to have any chance of victory—a formidable opponent for the forgettable Shujinko. 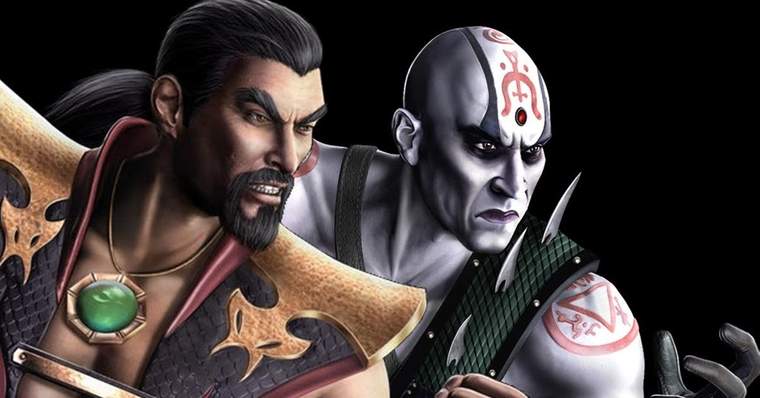 For some strange reason, the developers of Mortal Kombat: Deadly Alliances thought it would be a good idea to elect Shang Tsung along with Quan-Chi as the game’s final adversaries. Shang Tsung is shown to be stripped of his more intimidating abilities from the first Mortal Kombat, so the villain fails to make a good impression.

But at least he still has the panache of a great antagonist. The same cannot be said for Quan-Chi, who looks more like a simple embittered advisor than anything else. Fortunately, these are the only final bosses that can take a Fatality so that you can take out your frustration with a brutal finish. 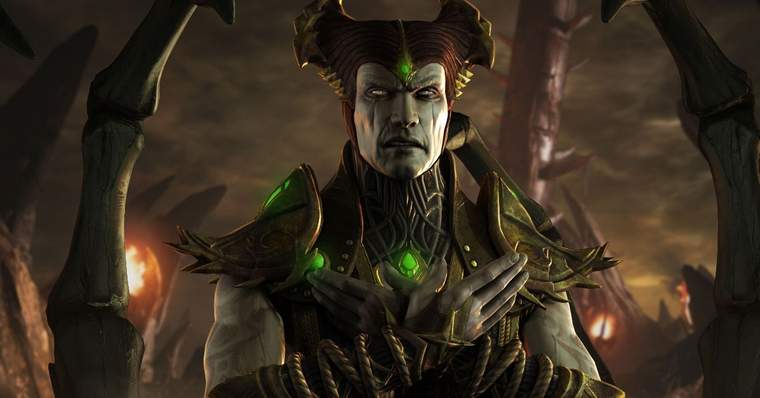 It is hard not to respect a fallen Elder God, even more so when he decides to wage war against his former pantheon. Shinnok is mighty – the last enemy you will face in Mortal Kombat X (2015). His range of attacks is quite varied and will bring even more trouble when he takes on his corrupted form.

Taking on an actual demon’s appearance, he stops relying so heavily on magic to attack with his brute strength. It takes a lot of effort to defeat him, but the feeling of achievement is unparalleled—definitely one of the franchise’s most impactful opponents – and Raiden’s greatest rival. 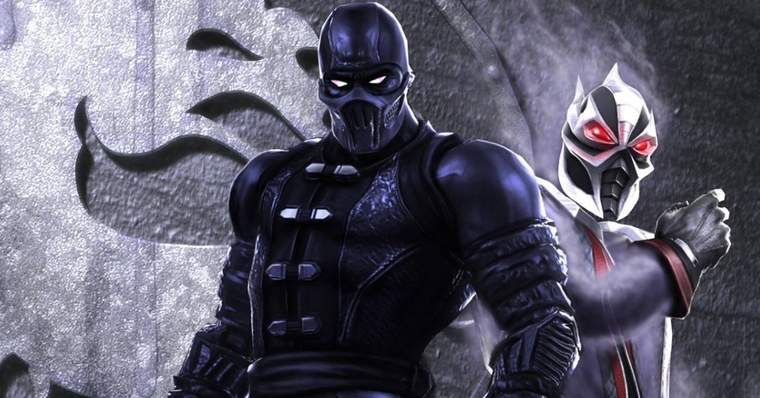 Among the multitude of ninjas that Mortal Kombat has introduced throughout history, Noob and Smoke are not among the worst, but they are far from imposing enough to act as bosses in any game. Still, in Mortal Kombat: Deception, the duo debuted as underbosses, disappointing many players.

There wasn’t much that set this clash apart from any other. You faced one ninja at a time, sharing the same life bar. It didn’t take much effort to learn how to fight back from simple, tedious attacks. In a game full of qualities, this fight is not one of them. 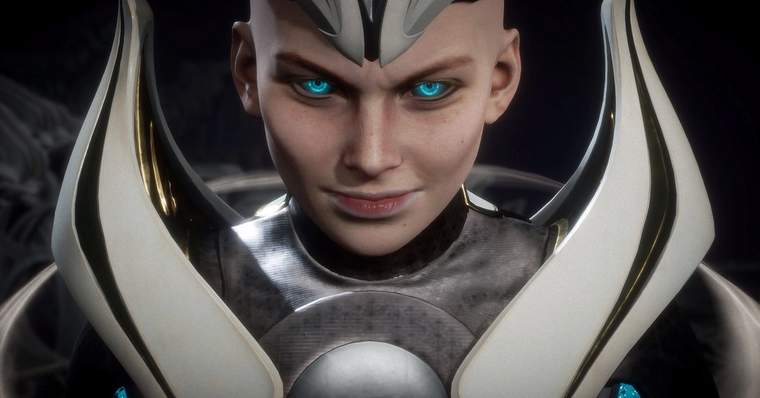 The first boss of the franchise showed what she was made of in Mortal Kombat 11. Kronika is a temporal entity more powerful even than the Elder Gods, such as Shinnok. She takes advantage of Raiden’s interference in Mortal Kombat (2011) to try to rearrange time at her pleasure.

In combat, she has a diversity of attacks that border on what can be considered fair. The most challenging things to escape are the areas that drain the enemy’s life and the unblockable projectiles. But all that sacrifice is rewarded with one of the most satisfying kills in the entire franchise. 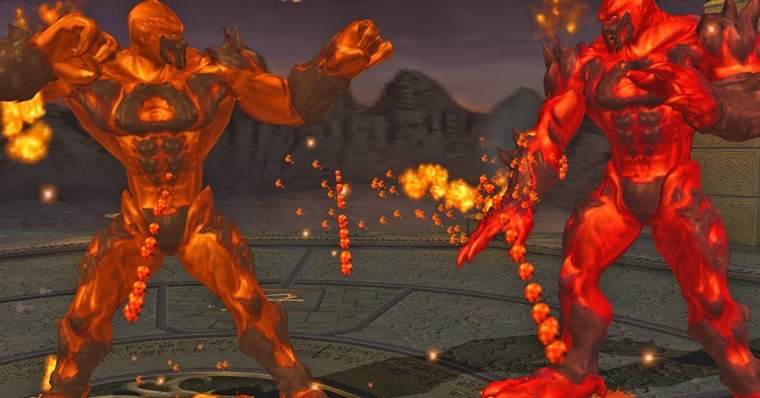 First of all, let’s agree that Blaze‘s design is the most basic thing Mortal Kombat has ever seen. The character who is supposed to be the most powerful villain in the universe is just a generic lava golem. He is intimidating in the dramatic introduction to Armageddon, but you only have to face him to realize that he is not that great.

Blaze is possibly the weakest boss in the history of the franchise. For someone who came up with the premise of ending the Mortal Kombat universe, this is disappointing, to say the least. He even had a few nifty moves in his arsenal, like teleportation where he became a lava pit, but nothing too impressive. 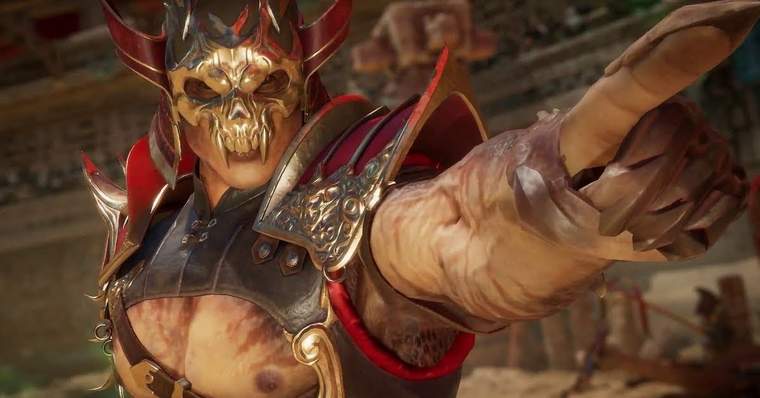 You haven’t suffered in Mortal Kombat if you haven’t had your shoulder blown by Shao Kahn. The Emperor of Outworld knows how to strike fear, earning respect even among other villains, such as Shang Tsung. On the battlefield, he has no trouble dominating his enemies and will require some strategy to defeat.

Shao Kahn is also immensely relevant to the narrative arc of the franchise. After surviving the events of Mortal Kombat: Armageddon, Kahn becomes the supreme leader of all realms. The only way Raiden found to defeat him was to basically rewrite history, giving rise to a soft reboot of the franchise. 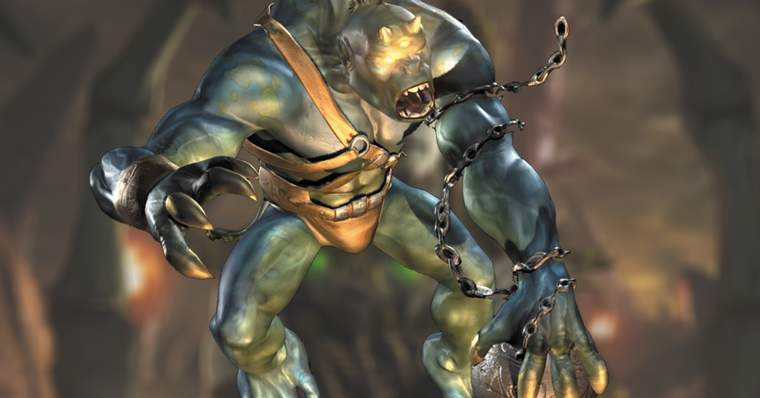 Moloch may only be a sub-boss, but he didn’t even deserve that position with such a generic appearance. He is just a lout with a wrecking ball. He looks more like the goblins in Harry Potter and the Philosopher’s Stone than an enemy to be respected.

His battle in Mortal Kombat: Deadly Alliances has not the slightest bit of originality. He basically tries to push, block or grab you. There was definitely not much effort put into creating this character.