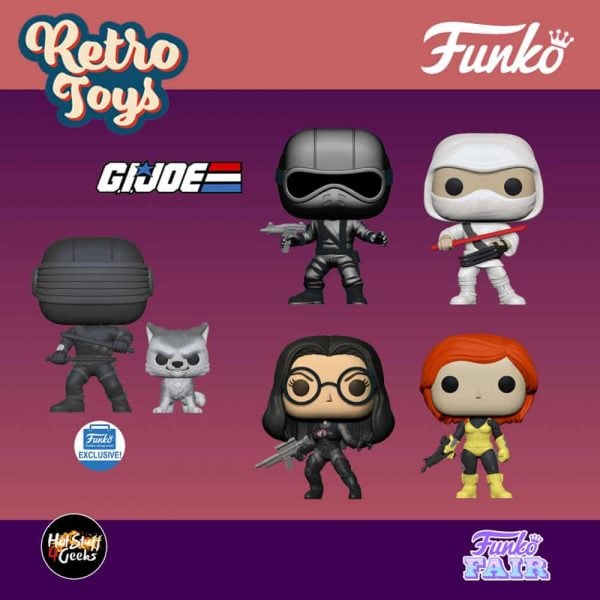 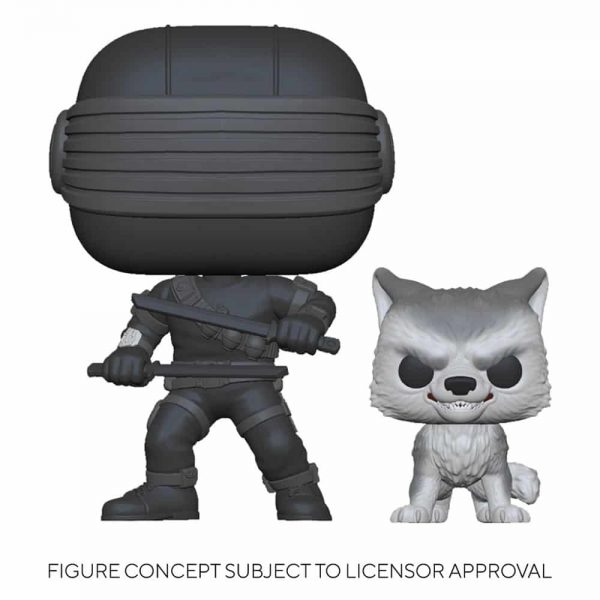 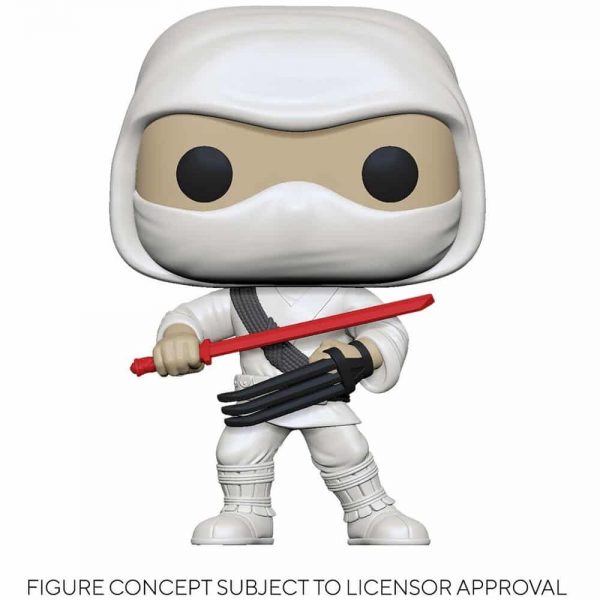 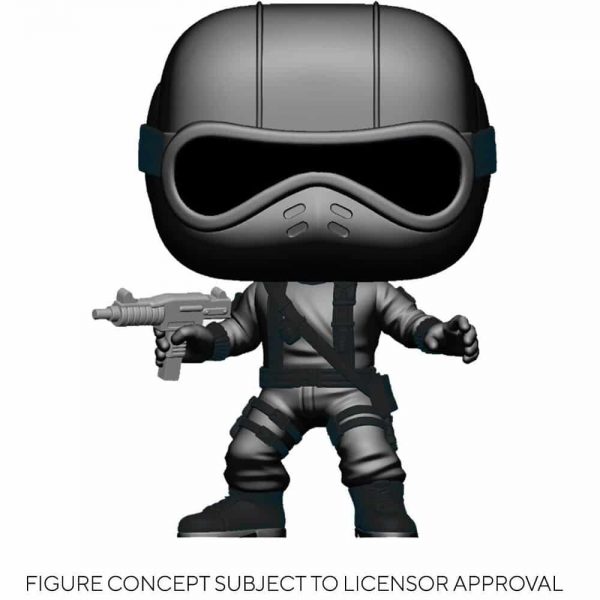 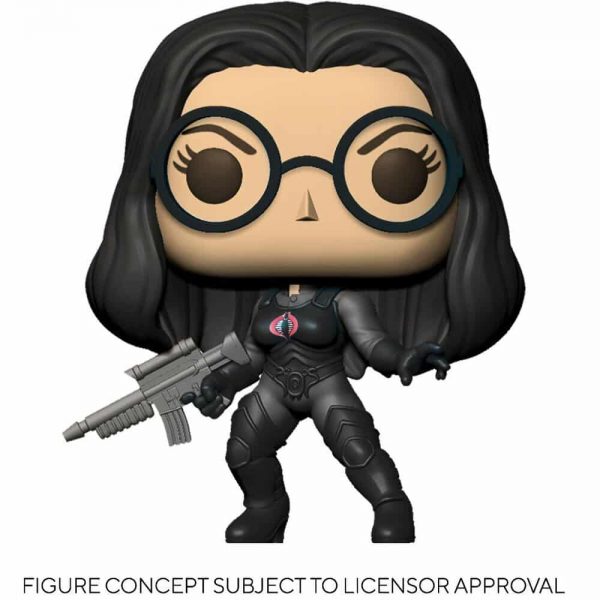 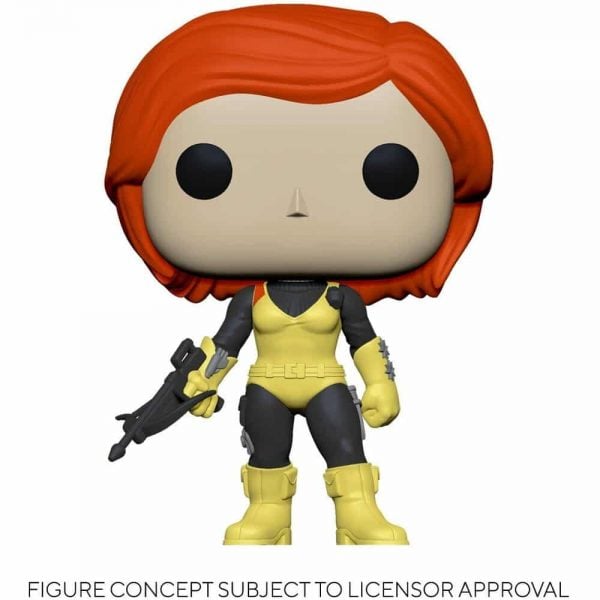 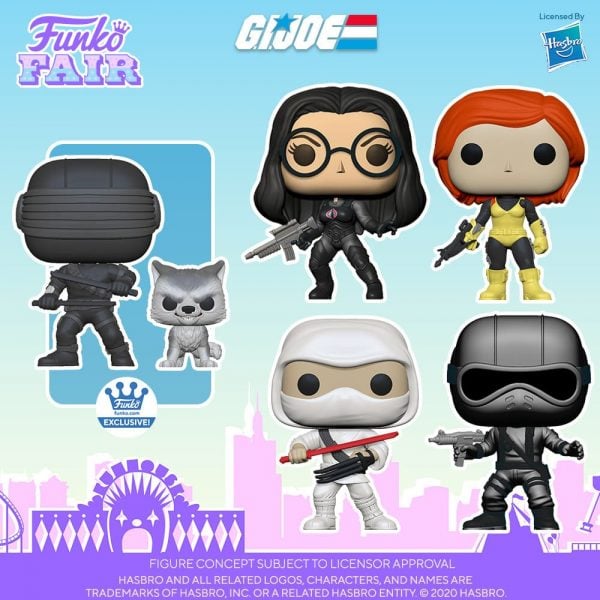 As many fans know, G.I. Joe is an American action figures franchise produced by the toy company Hasbro. Its purpose: to defend human freedom against the Cobra Organization, a ruthless terrorist group determined to dominate the world. The good guys are represented by Snake Eyes and Roadblock, while Cobra Commander and Storm Shadow make up the opposition.

It doesn’t matter if you’re a fan of comics, movies, or both! Funko always brings some of our favorite heroes and villains. 🖤 The new Pop figures in the G.I Joe lineup include:

Scarlett is one of the original members of the G.I. Joe Team and debuted in 1982. The character is also featured in both the G.I. Joe: Sigma 6 animated series and comic books.

Baroness, originally appearing in the first issue of the G.I. Joe: A Real American Hero comic series by Marvel Comics in June 1982. The Baroness is a villainess, associated with G.I. Joe’s nemesis, Cobra.

Storm Shadow is best known as the Cobra Commander’s ninja bodyguard, and for his history with fellow ninja Snake Eyes.

Snake Eyes is one of the original and most popular members of the G.I. Joe Team and is most known for his relationships with Scarlett and Storm Shadow.

The G.I. Joe pops are set to be released in May and are already available for pre-order in the links below. 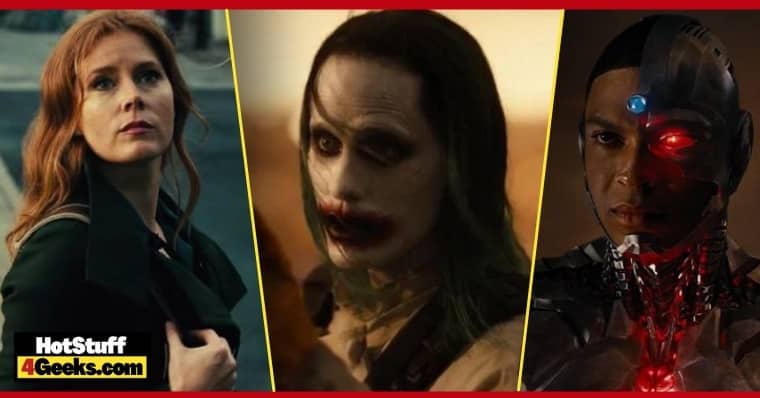 After a long wait, Zack Snyder’s Justice League has been officially released on digital platforms. We finally have the director’s complete vision with over four hours of our favorite DC Comics heroes.

In addition to expanding the combat and enhancing the story’s cohesiveness, the new scenes develop DC’s characters in a way never seen before. Snyder knows how to spark curiosity in his creation, leaving audiences wondering what a future with more stories in this universe would look like. While Warner doesn’t announce anything new, we’ve prepared a list with 10 characters we’d still like to see in DC movies.

To the delight of many a big boy, Snyder has brought us a glimpse of the full power of the mighty intergalactic dictator Darkseid. This version of the Justice League is only a prelude to his colossal onslaught against our planet. We have learned his motivations, met his loyal generals, and the time has come to see the conqueror in action.

In the movie, very short flashbacks showed a fraction of his power – unmatched strength and practically inescapable omega rays. Now we want to see how the Justice League would stand up to his wrath. Knowing that the Anti-Life Equation is on Earth, he will stop at nothing, and it needs to happen in the theaters. 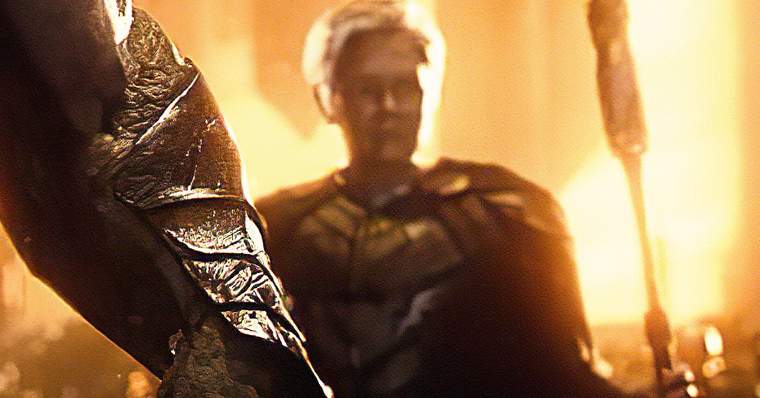 When Steppenwolf opens a portal to Apokolips, Granny Goodness timidly appears in the background of the scene. But we know she’s not shy at all. It’s about time we saw all her cruelty in a new DC movie – along with her army of Female Furies.

In the comics, she trains the most skilled women of Apokolips to serve Darkseid directly. A scene where Wonder Woman is forced to face them and is almost defeated, but manages to emerge victorious thanks to the unexpected help of the Big Barda. 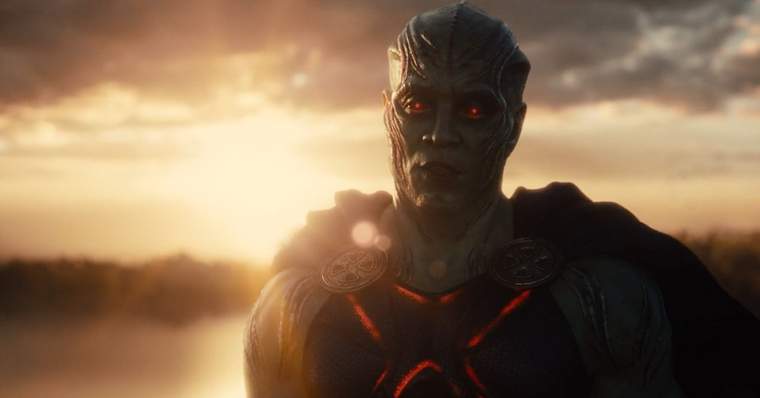 Among the most powerful heroes of DC Comics is J’onn J’onzz, the Martian Manhunter. Even Superman fears facing him in the future. But if he is so strong, then what would be the reason for his apparent inaction in the face of the dangers of global destruction seen in Zack Snyder’s latest films?

This mystery would be an exciting premise for a new solo film. A movie centered on the Martian Manhunter could further develop DC’s cosmic mythology, especially the clash between green and white Martians. Perhaps there would be time left over to explain why he helped Lois Lane in Justice League? The last Green Martian could be the key to several mysteries in this universe. 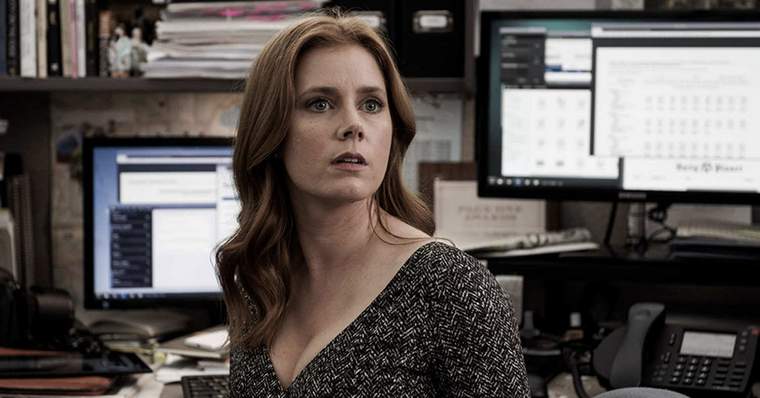 Speaking of Lois Lane, she is the key to everything… But what exactly does that mean? In Batman v Superman: Dawn of Justice, Flash returns from a dystopian future only to leave this warning for Bruce Wayne. Even though this is mentioned again in Zack Snyder’s Justice League, we still don’t have a clear answer of the journalist’s role in the grand scheme of things.

The character could be given greater prominence in a Man of Steel sequel. Of course, the most obvious path would be simply to deepen her relationship with the hero. Still, her true potential is hidden in her journalistic tenacity, which we follow in the extended version of The Dawn of Justice. It would be surprising for the audience to discover that the secret to defeating Darkseid came from his investigations. 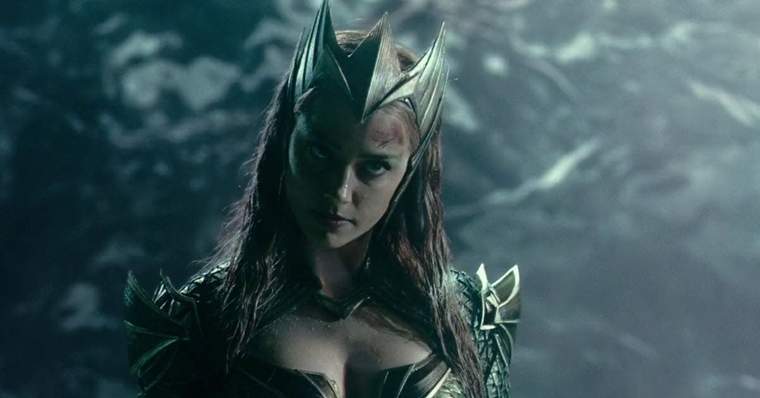 But before we tackle the problems of the world Batman sees in his nightmares, we need to get to know it a little more. Clearly, this is a future where Darkseid won, and Superman went mad, but how did things get to this point? What led DC’s great heroes and villains to collaborate under Batman’s leadership?

Insurgency’s story has a certain similarity to the Injustice franchise’s games, which can bring lessons in building these unusual relationships in movies. There are new facets of old characters, but the one that stands out the most is Mera taking over her beloved’s trident after his murder. A revenge story, called “Injustice: Knightmare,” with Aquawoman determined to kill Superman, would be exciting. 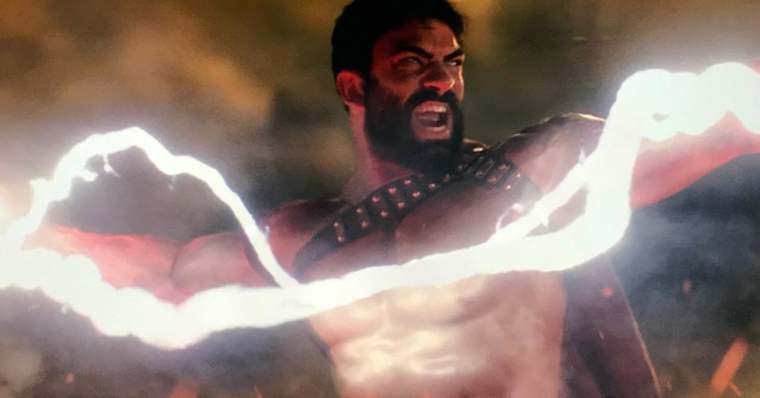 Without much fanfare, the DC Universe’s Greek pantheon in theaters has expanded even further in Zack Snyder’s Justice League with Zeus and Artemis‘s debut. In the first Wonder Woman film, Queen Hippolyta claims the Gods are dead but are they?

In the New 52 canon, Zeus is Diana’s real father. We could see this relationship being explored further in future Wonder Woman films. By investigating Artemis’s arrow further, Diana could discover that the Gods were trapped all this time, and freeing them could put the world in danger once again. 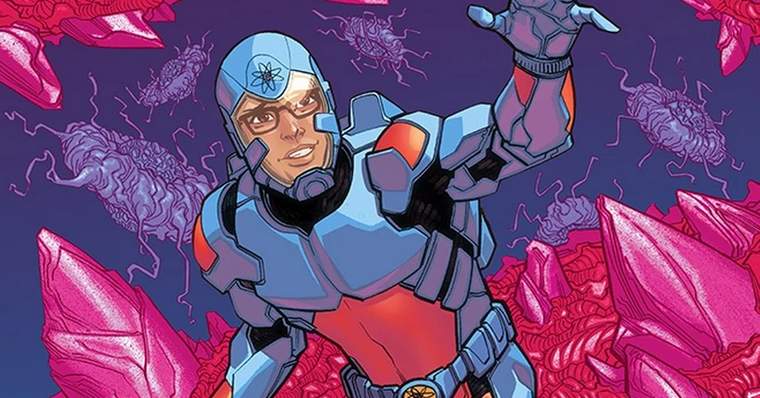 Marvel Studios was able to take advantage of Ant-Man to bring a fantastic heist comedy to life. If DC plays their cards right, Atom could be an interesting counterpart in their universe, exploring more of the science fiction side.

We don’t see the hero in Justice League, but rather his civilian identity: scientist Ryan Choi. He studied under the tutelage of Silas Stone, Cyborg’s father, and his superheroic origin in this universe could be linked to his research with the Mother Boxes. Zack Snyder had plans for such a project starring actor Kai Zheng. Who knows, maybe he will return in a Cyborg movie? 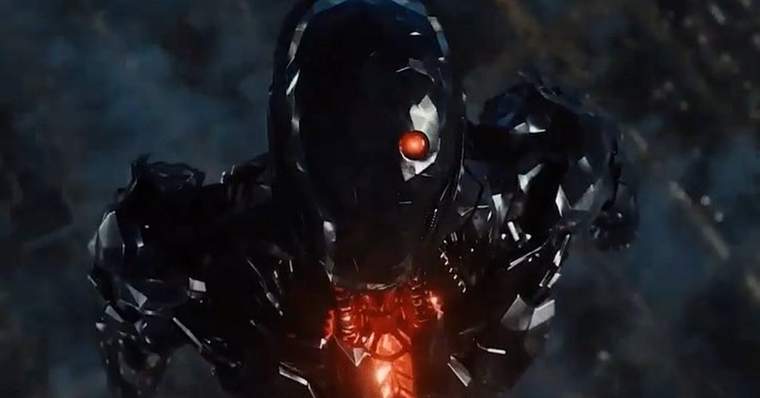 The biggest beneficiary of Zack Snyder’s restored vision was undoubtedly Ray Fisher’s Cyborg. The new version of Justice League is basically the hero’s origin film, exploring in depth his traumatic relationship with his father. The movie brings a satisfying conclusion to that drama, but a solo movie could explore his legacy’s nuances.

The perfect villain to reopen Cyborg’s wounds would be Anomaly. He has the exact same appearance as Silas Stone and was born out of the scientist’s unethical experiments. Silas was looking for a way to cure his wife of cancer while protecting his son from the pain of this thankless struggle. Confronting his father’s legacy with his mother’s memory would be a very mature way to proceed with the robot man’s emotional journey. 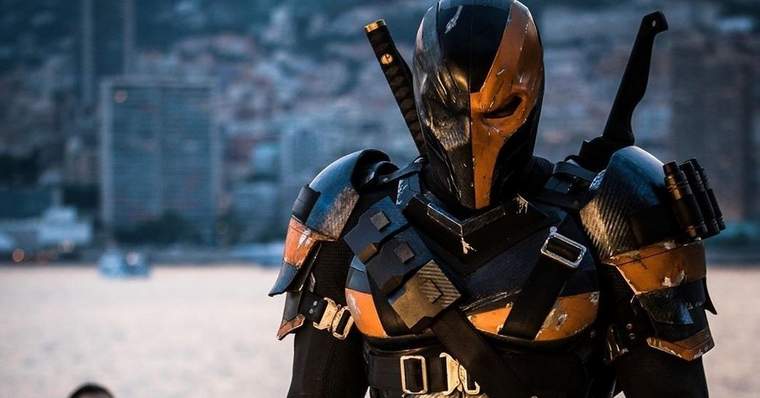 The origin of the Deathstroke as one of the best soldiers of the Vietnam War and his corruption would make a first-rate series. And it’s not just me who thinks so. Zack Snyder himself would like to see some such project on HBO Max.

Far beyond his past, we need to know what the Deathstroke is going to do with the information he has generously received from Lex Luthor. Now that he knows Bruce Wayne is Batman, what is his plan to defeat the Dark Knight? One last film with Ben Affleck‘s Batman would cure all our doubts. 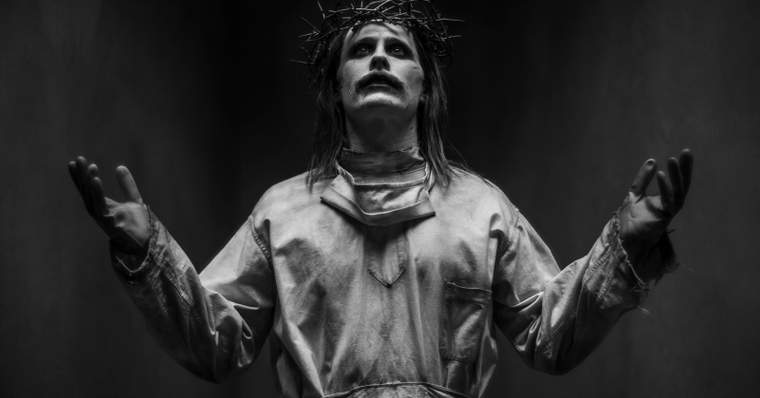 When Suicide Squad premiered, and the public spread all their hatred for the new version of the Joker all over the internet, Jared Leto reservedly claimed that the best parts of his performance had been cut in the editing room. Considering his appearance in Zack Snyder’s Justice League, he may be right.

The new incarnation of the Joker is one of the most unstable versions the movies have ever seen, putting philosophy aside a bit to dive right into the madness. But there is something about him that is a little reminiscent of Suicide Squad. It would be interesting to see him return in a few films to get a closer look at the transition between mobster of laughter and messiah of insanity.