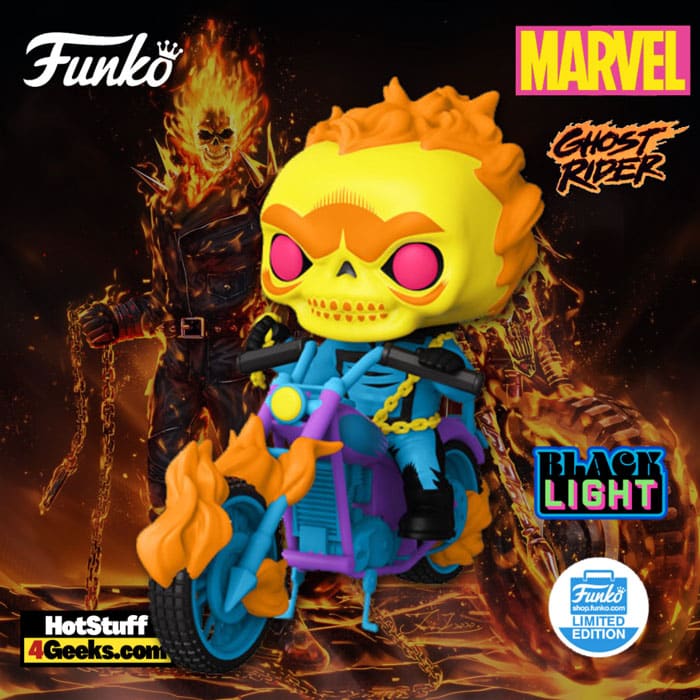 Now you can complete your Marvel Black Light set by collecting the Funko Pop! Rides Super Deluxe: Marvel – Ghost Rider (Black Light) Funko Pop! Vinyl Figure, that drop today at Funko Shop as an exclusive. The ‘hero’, who became eternalized on the silver screen thanks to the unique charisma of Nicolas Cage as Johnny Blaze.

Ghost Rider is one of Marvel’s most popular characters. Mainly for the fact that he is quite different from the usual heroes. With infernal powers, pacts with demons, and punishment of sinful souls, Johnny Blaze and other incarnations of the Spirit of Vengeance are the leaders of Marvel’s dark side.

In addition, Ghost Rider has traveled between dimensions, altered his size, and manipulated demonic magic. Not to mention, of course, the Penance Stare, which makes a person feel every drop of pain they have ever caused by looking into the eyes of the Rider.

Celebrate your favorite bit of Marvel madness with this Black Light Ghost Rider Funko Pop! is now available at the links below. But hurry because it will run out fast! Good luck! 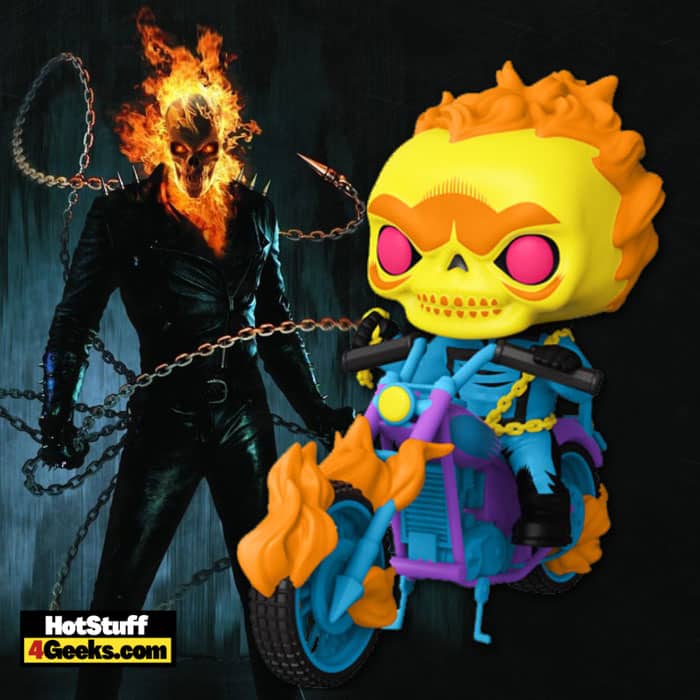 One of the most striking faces in superhero comics, a skull on fire, got a flesh and blood version in 2007. In Mark Steven Johnson’s “Ghost Rider,” Nicolas Cage plays the cursed character from Marvel.

In the story, the young and innocent Johnny Blaze is tricked by Mephistopheles (Peter Fonda).

He sells his immortal soul in exchange for the recovery of his father’s health, is orphaned in the same way, and has to live with the bitterness of knowing that the demon will return at any moment to confiscate his soul.

Blaze doesn’t know it yet, but he is destined to become the Ghost Rider, a kind of “henchman” of Mephistopheles who has free will.

In other words, between one and another battle against infernal spirits, he still finds time and disposition for “small” tasks, such as stopping a robbery.

Ghost Rider is different from his colleagues in the comics. He is not handsome like Superman or Dick Tracy, nor does he wear a mask like Spider-Man or Batman.

He is a freak: a creature that has, instead of a face, a burning skull. He has no mouth to speak, which does not prevent him from issuing unappealable verdicts such as “guilty” or “innocent.”

And he does not fly or jump from one building to another but moves about on a motorcycle powered by circles of fire in place of wheels.

Director Mark Steven Johnson took advantage of the character to create a horror and fantasy film.

Terror: As if selling his soul wasn’t enough, poor Johnny Blaze is caught in the middle of a battle between five literally hellish creatures.

Fantasy: Once Blaze “ignites” and becomes the Rider, he is ready for almost anything, including climbing a dozens-story building from the outside, with the bike sliding down the outer wall as if it were an ordinary runway.

And then there is the human side. The Biker is Johnny Blaze, an idol who makes a living doing somersaults with his motorcycle.

He is in love with Roxanne Simpson (Eva Mendes), but cannot get close to her, for fear of putting her in danger.

While he is so fearless as to attempt impossible feats on two wheels, he is constantly pressured by the dread of knowing that one day the Devil will come to collect the debt.

The film relies on special effects and creates a character torn between remorse for past mistakes and hope for a second chance.

The film has great looks, a suspense-filled plot, and a hero who looks super-powerful on the outside, but he’s bitter inside.

For fans of superhero stories, there is nothing to complain about.

Ghost Rider was inspired by the popular American song “Ghost Riders In The Sky,” originally recorded by Stan Jones in 1948.

A version of the song was even used in the character’s movie.