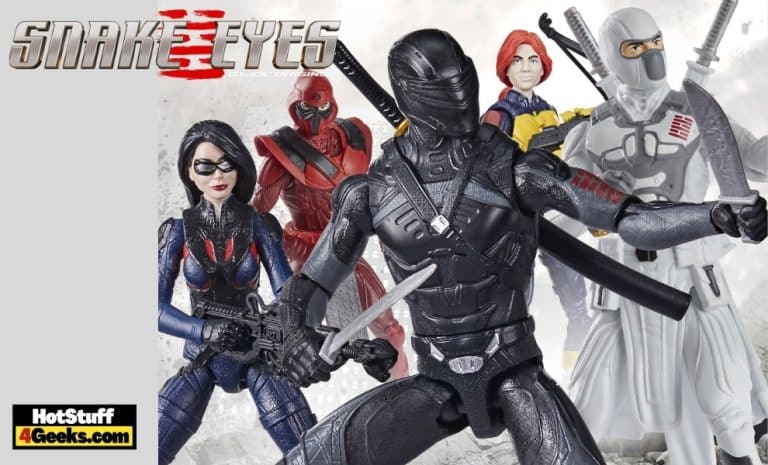 YO JOE! Snake Eyes is hitting the big screen next month, so get your collection ready now! All-new G.I. Joe Action Figures by Hasbro are up for pre-order now!

Snake Eyes is one of the most popular and recognizable characters in G.I. Joe, mainly because of his mysterious nature.

Snake Eyes: G.I. Joe: Origins will reboot the story of the mysterious ninja in theaters and has plenty of material to tell the origin of Snake Eyes. He was introduced in Hasbro’s first series of G.I. Joe toys in 1982. Inspired by the upcoming movie, another wave is coming:

Snake Eyes: G.I. Joe: Origins 6-Inch Action Figures by Hasbro are now available for pre-order at the links below (click to jump!) They’re expected to be released in August 2021. 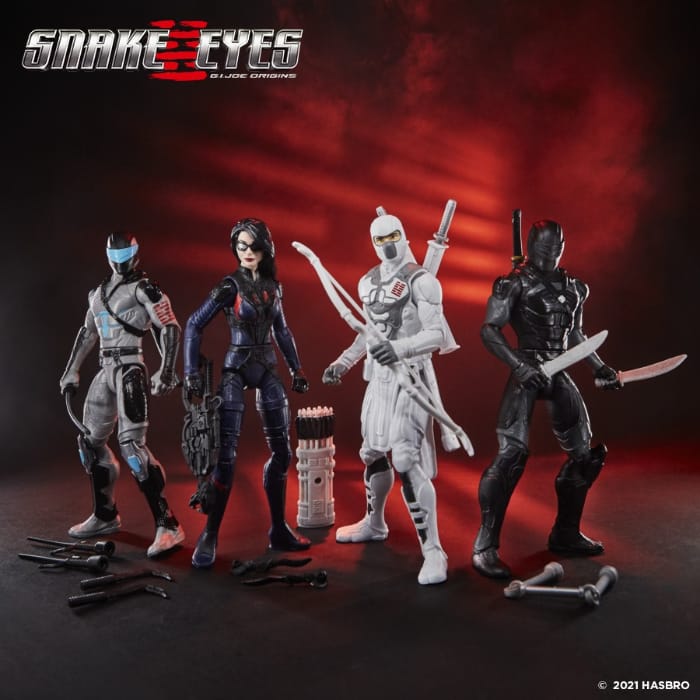 Who is Snake Eyes in the G.I. JOE franchise?

Because of his mysterious nature, the true story of Snake Eyes is a little hard to define. The original character was written as a United States Army veteran who fought in various campaigns and eventually became a Delta Force operator.

However, most presentations of the character-focused on his secret identity, so details of his life and background are usually hard to find. 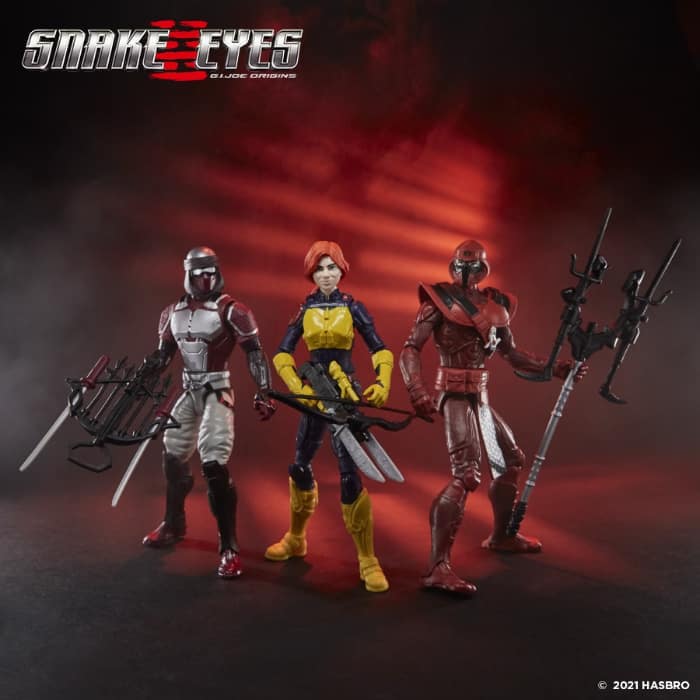 Still, we do get to know essential elements of Snake Eyes’ life story. The GI Joe character was instructed in the art of ninjutsu by the Japanese Arashikage clan, where he developed a close relationship with the ninja Storm Shadow – a character who sometimes rivals him, sometimes becomes an ally.

Snake Eyes is one of the most skilled fighters in the G.I. Joe organization, a master of 12 martial arts and survival in the jungle and extreme climates. No small feat, right? He is also a skilled strategist and military fighter trained in the use of firearms and melee weapons. 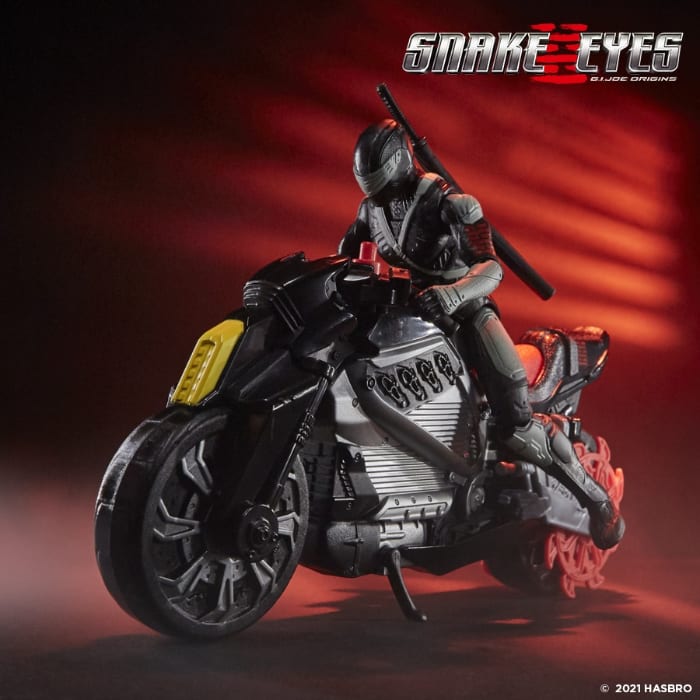 Snake Eyes has a canine companion named Timber, and usually wears a mask and does not speak – both traits lasted because of previous injuries – and has had a romantic relationship with Scarlett several times.

As his history is changeable, sometimes he was in the military command long before training with the Arashikage. In other cases, he was brought into the clan as an orphan child.

The accident that injures his face and vocal cords also changed slightly at different times, as did the nature of his relationship with Storm Shadow and his rivalry with Cobra Commander. 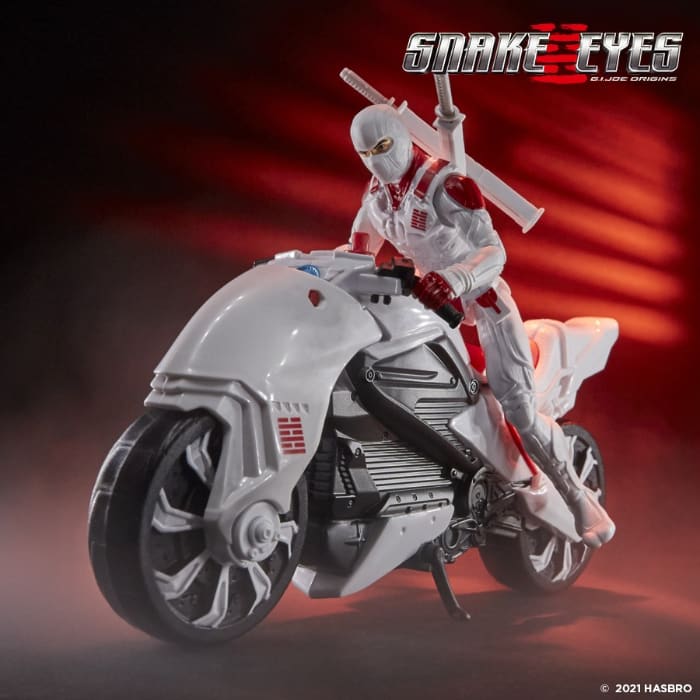 What will Snaky Eyes look like in Snake Eyes: G.I. Joe: Origins?

The film will follow the hero Snake Eyes, a loner who joins an ancient Japanese clan called the Arashikage after saving the life of their heir, Storm Shadow. While he is trained to become a ninja warrior, his honor and loyalty are tested by Cobra, a terrorist organization. The spin-off will show the complicated relationship between Snake Eyes and Storm Shadow.

Henry Golding, who brings the protagonist to life, gained prominence in 2019 in the romantic comedy Crazy Rich Asians, in which he starred alongside Constance Wu. In G.I. Joe – The Rise of Cobra and G.I. Joe – Retaliation, Snake Eyes was played by actor Ray Park.

Besides him, other famous names will be part of the production: actress Ursula Corberó, who is preparing for her farewell to La Casa de Papel, will play the Baroness in the new film. Also in the cast is Peaky Blinders actor Andrew Koji as Storm Shadow, and Samara Weaving from Bloody Wedding will be Scarlett, one of Snake Eyes’ mentors.