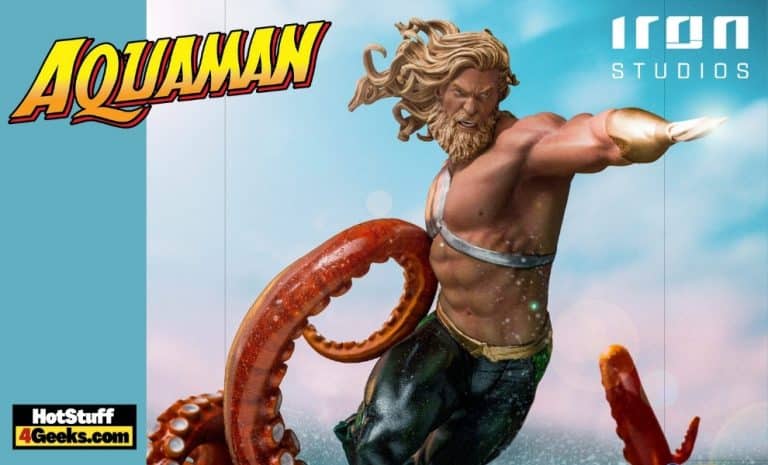 Created in 1941 by Mort Weisinger and Paul Norris, Aquaman is one of DC Comics’ most popular heroes, but also one of the most underrated.

Unfortunately, the potential of this character is often overlooked by comic book fans who think that the only thing Aquaman can do is talk to fish. But don’t be fooled, Arthur Curry is far more powerful than you think!

Arthur Curry is quite powerful, in fact, there are fans who maintain that he is second to no other DC Comics heroes. Although all the inhabitants of Atlantis have similar powers, Arthur’s powers are superior, a result of his royal lineage.

Iron Studios is traveling DC Comics fans back to the 1990s as they reveal their newest Aquaman 1/10 Scale Superhero Statue. With longer hair, beard, hook hand, and shirtless costume design, this bad boy is ready to kick ass and take names.

Iron Studios also brings the Kraken up from the depths assisting Aquaman on his journey. The statue stands 10.2 inches tall and is highly detailed, making it a perfect collectible for any fan of the King of the Seven Seas.

The Aquaman 1:10 Scale Statue by Iron Studios is priced at $199.99. Pre-orders are already live and can be found at the links below. Its release is scheduled for the 3rd Quarter of 2022. 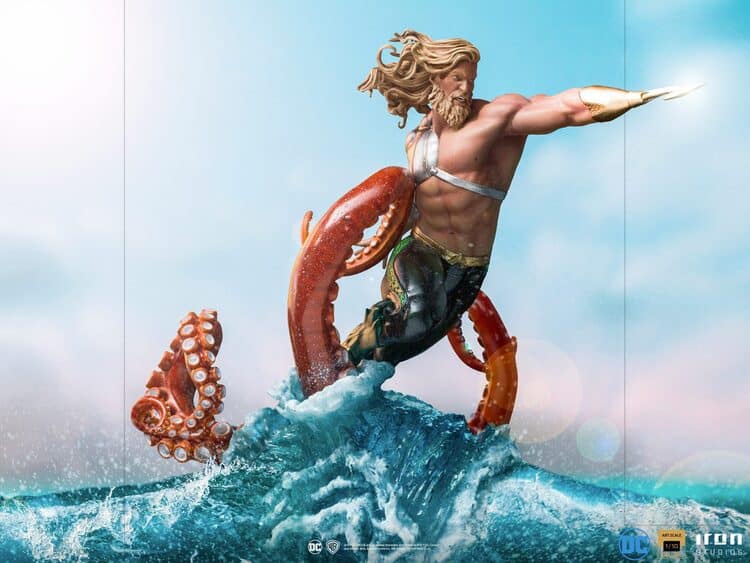 Aquaman, the man between two worlds, was created by Paul Norris and Mort Weisinger and made his debut in the anthology magazine More Fun Comics in 1941.

From a secondary hero in his early years to a more prominent role in later years, the King of the Seas didn’t really become a character in DC Comics’ top tier until the 1960s, when he was among the founding members of the Justice League of America.

For the next two decades, creative ostracism was his fate: while all the other major DC characters (Superman, Batman, Flash, Wonder Woman, and Green Lantern) were guided by the house’s best artists and writers, receiving great stories and starring in significant sagas, Aquaman was relegated to the background – even when adapted into other media – invariably serving as comic relief and a source of ridicule.

The 1990s brought new air to the King of Atlantis. The approach taken by Peter David reshaped his persona and his surroundings, investing in expanding the mythology of the kingdom of Atlantis and highlighting the obvious power of a character who has full powers over 70% of planet Earth – much more than just swimming with extreme skill, surviving underwater, and communicating with sea animals.