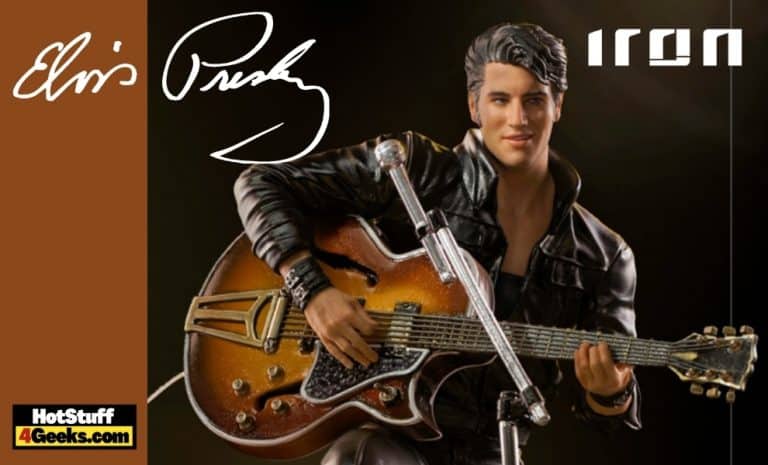 Iron Studios has announced the new Elvis Presley Comeback Deluxe Art Scale 1/10 statue based on Elvis Presley during his “Comeback Special” that aired in 1968.

The 1/10 scale statue features Elvis on a signature display stand, with a microphone and amplifier, while Elvis holds a guitar. The statue stands at 9″ tall and is cast in polystone.

He who was once King never loses his Majesty. The good old saying never made more sense than on December 3, 1968, the triumphant return of the King of Rock. That night the “Elvis” Special, also known as the ’68 Comeback Special, was aired on NBC. It was the return of Elvis Presley to the place where he should never have left: the throne.

The Elvis Presley 1:10 Scale Statue by Iron Studios is priced at $169.99. Pre-orders are already live and can be found at the links below. Its release is scheduled for the 2nd Quarter of 2022. 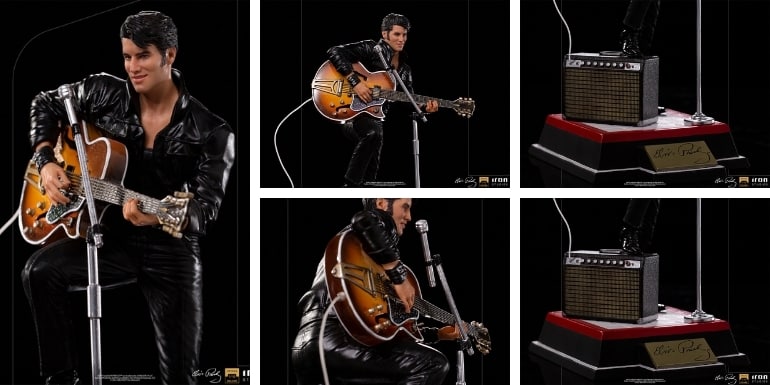 Any figure in rock ‘n’ roll history will never be as iconic – or mystifying – as Elvis Presley. Born in Mississippi, the musician with the frenetic hips revolutionized music and pop culture in the 1950s. With songs like “Jailhouse Rock” and “Blue Suede Shoes” exploding on live TV and radio, millions of teenagers ended up “swooning” for the King of Rock. At the same time, parents were horrified by his explosion of attitude and sexuality but soon danced along with the new sound.

In early 1968, Elvis realized his dream of becoming a father with the birth of his only daughter, Lisa Marie, but was unhappy with his career, lost between failures in music and film. To get an idea, of his eight singles released between January 1967 and May 1968, only two entered the top 40.

The music scene was very different since his last #1, in 1962. Now the Beatles and the Rolling Stones, and the so-called British Invasion were in charge. Elvis was in doubt about his quality as an artist, away from the stage since 1961 and from his throne as the King of Rock.

Everything changed with the TV special. The agreement between Colonel Tom Parker – Elvis’ agent – and NBC foresaw the recording of a program and a film. Much criticized for his choices for Elvis’ career, Parker wanted the program to be a Christmas special, with well-known end-of-the-year songs.

Thanks to the courage and daring of the then young director of NBC, Steve Binder, 26 years old at the time, what was to be another failure became the resurrection of Elvis Presley. “I basically said his career was going down the drain,” Binder recalled in an interview almost 40 years after the special.

So he convinced Elvis that the show could be an opportunity to change his destiny. With skill, intelligence, and a lot of television knowledge, the director masterfully directed the King of Rock.

On the other side, Elvis embraced the idea. He agreed with almost all of Binder’s suggestions, including the most creative: to reconstitute, on stage, the informal moments of the King’s jams with the other musicians after rehearsals. Inserted in the middle of the show, allied to Elvis’ informal situations on stage, the jams fit perfectly in the Special. Binder “invented” MTV’s “Unplugged.”

The special was recorded between June 20 and June 23 at Burbank Studios in California. Blushing and relaxed after a trip with his wife and newborn daughter to Hawaii, Elvis showed all the talent, vitality, and soul that made him the King of Rock.

A performance for the history of music and rock, in which Elvis even sang gospel, with the controversial participation of a black female choir, The Blossoms, only a few months after the death of Martin Luther King. And in primetime!

After “Elvis,” the King of Rock regained his throne and was reborn. “From Elvis In Memphis,” his ninth studio album, released in June 1969, confirmed the royal comeback.