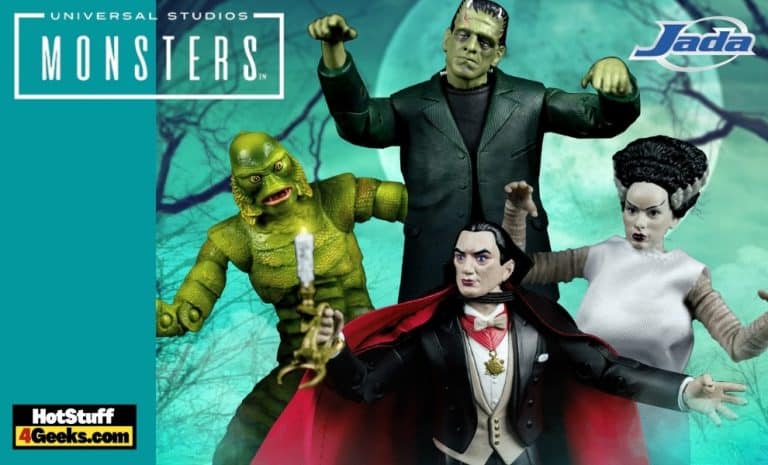 From the 1920s to the 1950s, Universal Studios released a series of feature films about horror, suspense, and science fiction that became classics of world cinema – and the collective imagination. This production series earned the title “Universal Monsters.”

Now, these creatures are back to haunt in a special release launched by Jada Toys.

The new figures are full-color versions of the horror icons. The assortment includes Dracula, Frankenstein’s Monster, The Bride of Frankenstein, and The Creature From The Black Lagoon.

The 6″ scale figures look to have about 25+ points of articulation. Each includes interchangeable portraits, swap-out hands, and some character-specific accessories.

Universal Monsters 6-Inch Scale Figures by Jada Toys are now available for pre-order at the links below (click to jump!) The figures are priced at $24.99 each and will be released in September 2021. 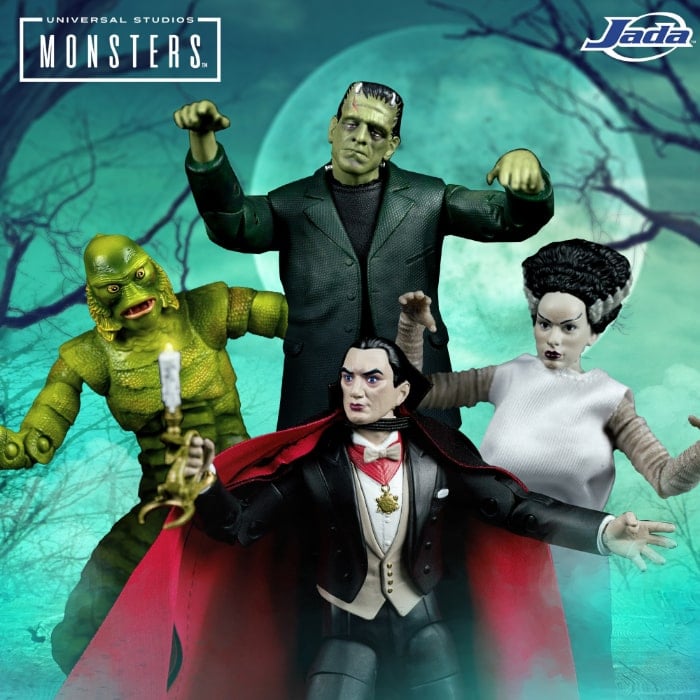 A geological expedition to the Amazon uncovers fossils of a skeleton with membranous fingers, which attest to links between terrestrial and aquatic animals in the region of the mythical Black Lagoon.

Professor Carl Maia and his friend David Reed, members of the Institute of Marine Biology, raise money for a new expedition to search for more evidence. They set off back to the location, joined by Kay Lawrence, Reed’s girlfriend.

When they arrive at the archaeological site, they discover that the men who were there were murdered by a mysterious creature that is half man, half amphibian.

Collectors, cast your net for the elusive Universal Monsters Creature from the Black Lagoon 6-Inch Scale Action Figure with a decidedly fishy disposition.

Harboring a detailed paint job swimmingly articulated form, the Amazonian Gill-Man can be posed in a multitude of mannerisms with his alternate head sculpt and accessories. The Creature comes packaged in a window display box. 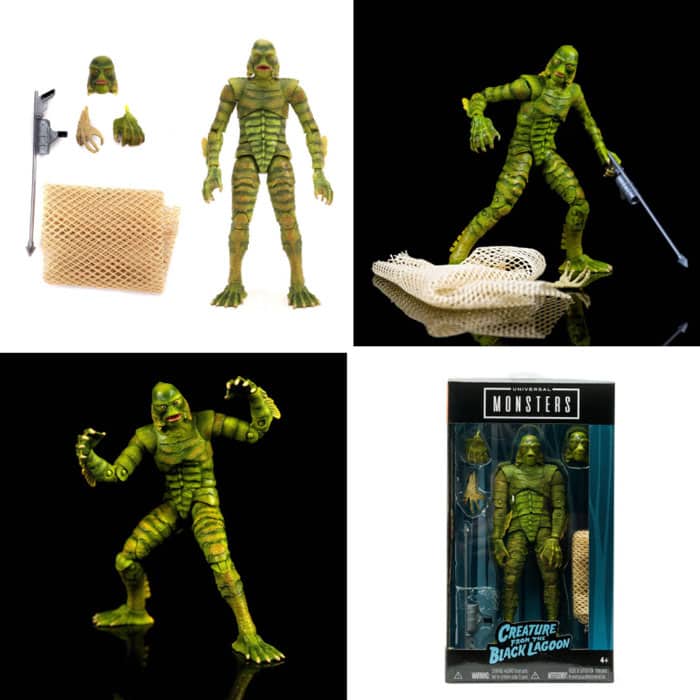 After a long journey through the Carpathian Mountains, lawyer Renfield arrives at Count Dracula’s castle in Transylvania with the mission of finalizing a real estate transfer, unaware that the Count is, in fact, a vampire who feeds on human blood.

Renfield is hypnotized and becomes Dracula’s servant, protecting him during his journey by sea to London. The Count begins to spread terror in the city until the Dutch physician Van Helsing is called in to help. An iconic film version of Bram Stoker’s classic Gothic literature, with Bela Lugosi in the title role.

Children of the night, stake your claim to this 6-inch scale action figure of the blood-sucking terror that is Dracula!

This Universal Monsters Dracula 6-Inch Scale Action Figure is sculpted and painted in un-deadest detail and is packaged in a window box. The immortal Lord of the Vampires comes with an alternate head and accessories which will keep you occupied until the break of dawn. 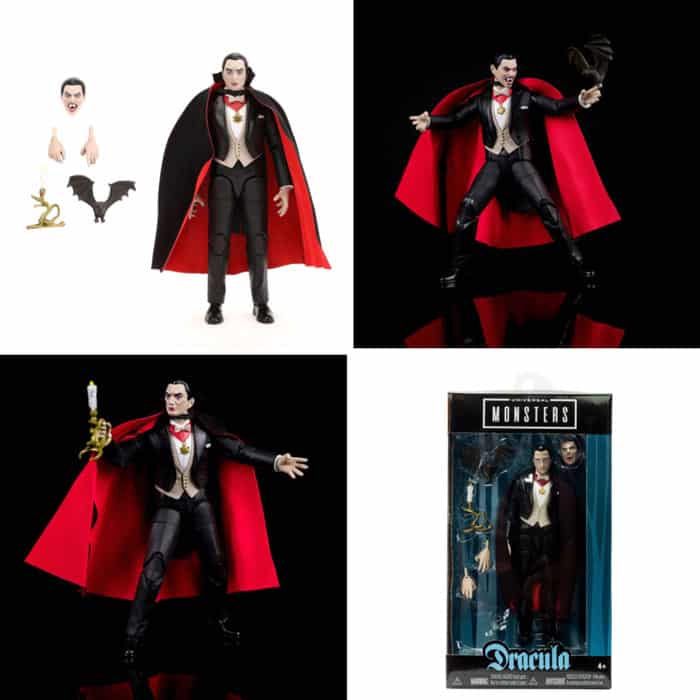 The young scientist Dr. Henry Frankenstein is obsessed with proving his theory of creating life from the dead. Alongside his assistant, the hunchback Fritz, he collects parts of corpses to build this new body.

When only the brain is missing, Fritz inadvertently steals that of a recently hanged murderer. The experiment succeeds, and soon the monster comes to life, but it doesn’t take long for murderous impulses to arise.

This is when Frankenstein realizes the terrifying nature of his work. Based on the Gothic novel by Mary Shelley, one of the greatest classics in horror.

It’s alive… and it’s collectible! Assembled with only the choicest parts from stolen corpses, Dr. Frankenstein’s reanimated monster is the crown jewel in Universal’s monster franchise – and now he’s all yours. 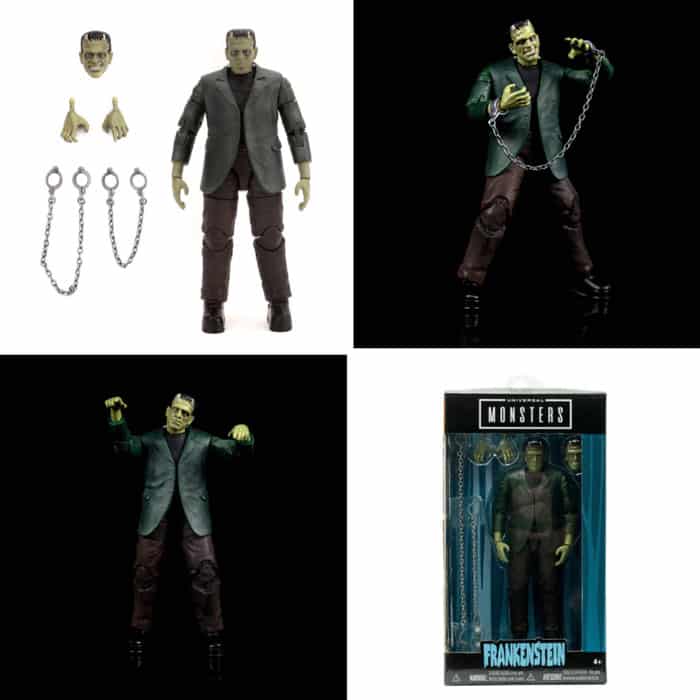 Dr. Henry Frankenstein and his creature meet again, for, unlike what everyone imagined, the monster is not dead. He now talks, drinks, and smokes, thanks to a blind older man who lived isolated in the mountains.

The scientist plans to stop his demonic experiments when his wife is kidnapped by one of his former teachers, the mad Dr. Pretorius, to force him to help in the birth of a new creature: a female to be the monster’s companion.

A sequel to the classic Frankenstein (1931), this is one of the most acclaimed films in Universal’s Monsters series.

Do you take this curvaceous corpse to be your bride? You bet your life! Fully posable and painted with a reanimated eye for detail, the Universal Monsters Bride of Frankenstein 6-Inch Scale Action Figure will serve and honor ’til death does she part.

And what parts! The Bride comes with an alternate head sculpt, plus a variety of accessories, and is packaged in a window box. 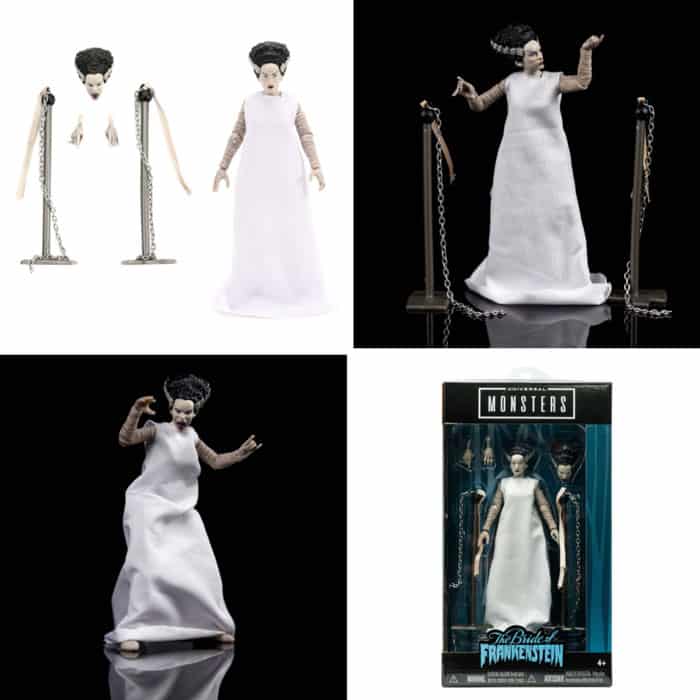