Avengers: Infinity War came to show us yet another chapter within Marvel’s Cinematic Universe, depicting the darkest hour of Earth’s Mightiest Heroes. In the middle of the conflict, we had Captain America, who went on to wear a well-worn version of his classic costume while taking on the name Nomad.

It is safe to say the original release of the Marvel Legends Infinity War Captain America did not do Cap justice in terms of accuracy of sculpting and to the movie itself. The figure is therefore getting a make-over and a new release in the Infinity Saga collection.

The new Infinity War Cap will now come with two head options, with a better likeness to Infinity War Chris Evans with the beard and longer hair. He will also come with both Wakanda shields and a pair of clenched fists so he “can do this all day.”

The figure looks to use the original body, so the good news should be that you can retrospectively swap the head of the old figure with one of the new, improved ones.

Hasbro: Marvel Legends Series – Captain America Action Figure, Premium Design, exclusive to Walmart, is now available for purchase at the links below. This figure is priced at $26.99 and it’s expected to be released on September 13, 2021.

Steve Rogers, the character played by actor Chris Evans, no longer identifies as Captain America in the movies. After abandoning his shield in Captain America: Civil War, he has assumed the identity of Nomad.

Nomad was the name adopted by Steve Rogers in the comics in 1974, after abandoning the uniform of Captain America, disillusioned with the United States.

As a consequence of the political scandals of the 1970s Watergate era, Rogers was embarrassed to wear the colors of the American flag after discovering that the mysterious leader of a villain organization was actually an influential politician.

He spent less than a year as “Nomad” before stumbling over his own cape and missing the shield. 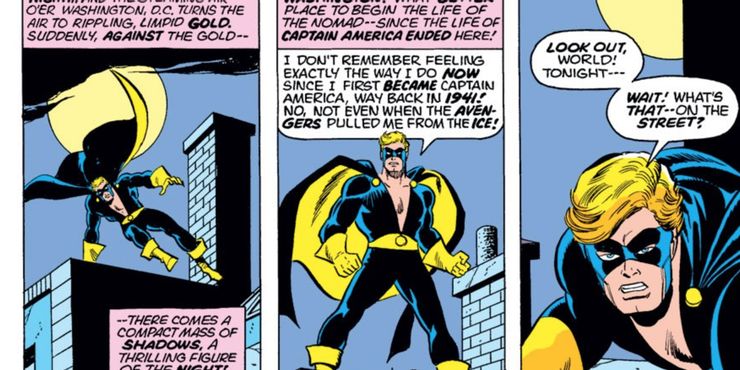 The character’s blue and yellow cape uniform was quite different from Chris Evans’s costume in Avengers: Infinity War. The movie version eliminates the shield and replaces the traditional colorful Captain America costume with a grayish color.

It’s a good thing he didn’t wear that awful look in the movies!