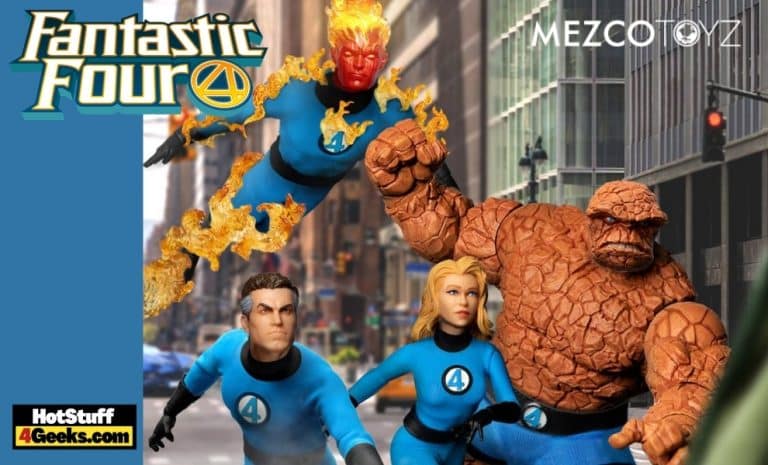 In addition to their One:12 Collective body, each character includes multiple head portraits, character-specific accessories, and a display base with logo and adjustable post. The set comes packaged in a metal tin, designed with collectors in mind, featuring hand-painted authentic detailing. Plus, H.E.R.B.I.E. is here to help!

Fantastic Four One12 Collective Deluxe Steel Boxed Set by Mezco Toys is now available for pre-order at the links below (click to jump!) This set of amazing action figures is priced at $499.99 and will be ready to ship in March 2022. 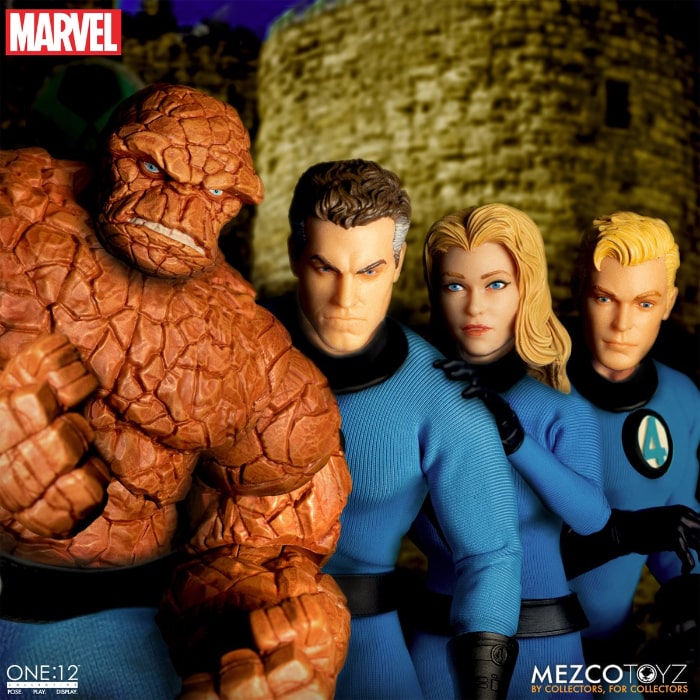 Reed utilizes his incomparable scientific brilliance and pliable form to lead the team. Mister Fantastic is the first One:12 Collective figure to come with an interchangeable torso featuring an internal skeleton armature durable yet highly poseable. 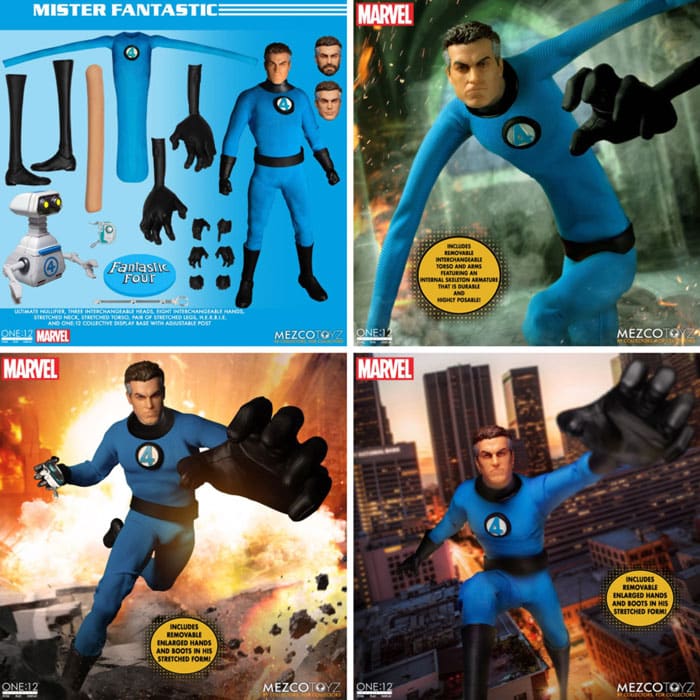 Sue has powers that give her the ability to both turn invisible and project invisible forcefields. She acts as the leading maternal figure of the Fantastic Four, providing the team balance and guidance. 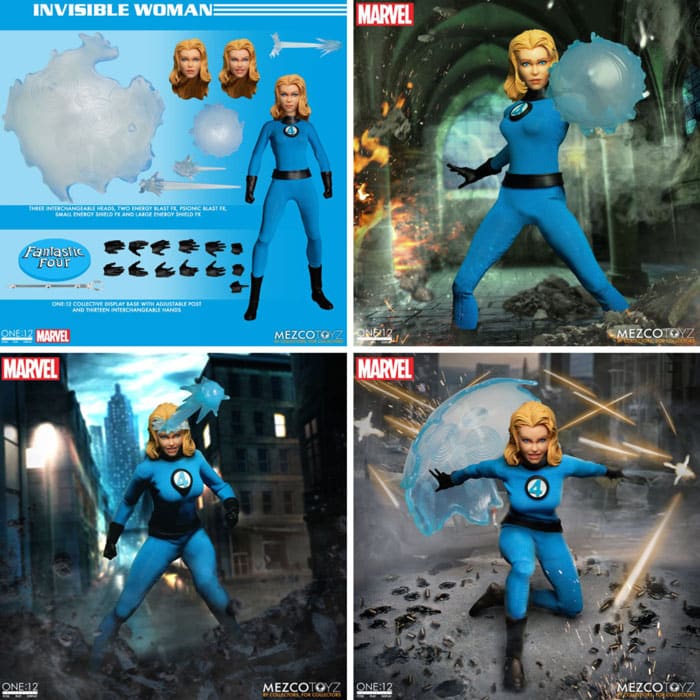 “Flame on!” Johnny Storm burns up the sky with an unquenchable love of adventure and always has the backs of his family.

In a costume that includes an Unstable Molecule jumpsuit with 3D Fantastic Four insignia, wrist gauntlets, a belt, and mid-calf boots, Johnny comes with a multi-fireball FX, a flame blast FX with light-up function (figure can stand atop it!), 4 fireball FX, and 6 body flame FX. 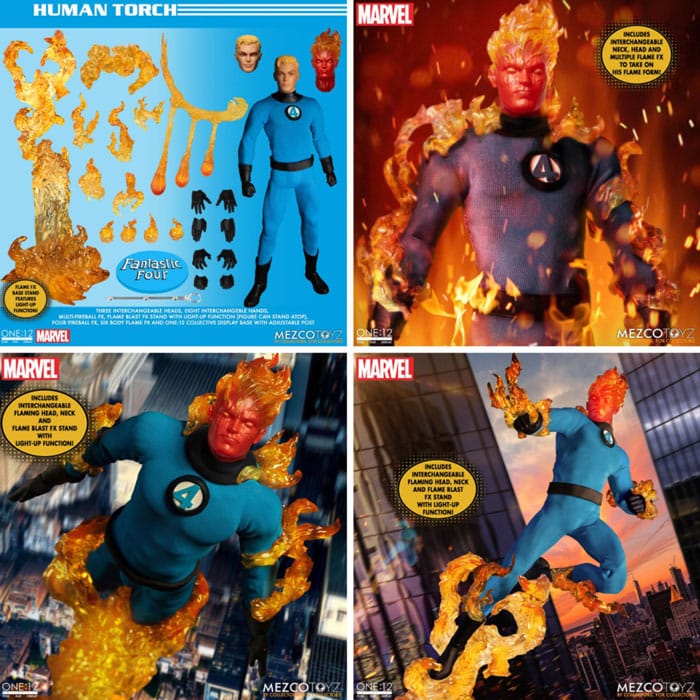 The Thing is a powerhouse with a heart of gold and is the backbone of his team. Ben Grimm measures roughly 6 3/4-inches tall and features over 26 points of articulation, 4 head portraits, and 6 interchangeable hands (a pair of fists (L&R), a pair of accessory-holding hands (L&R), and a pair of posing hands (L&R)). 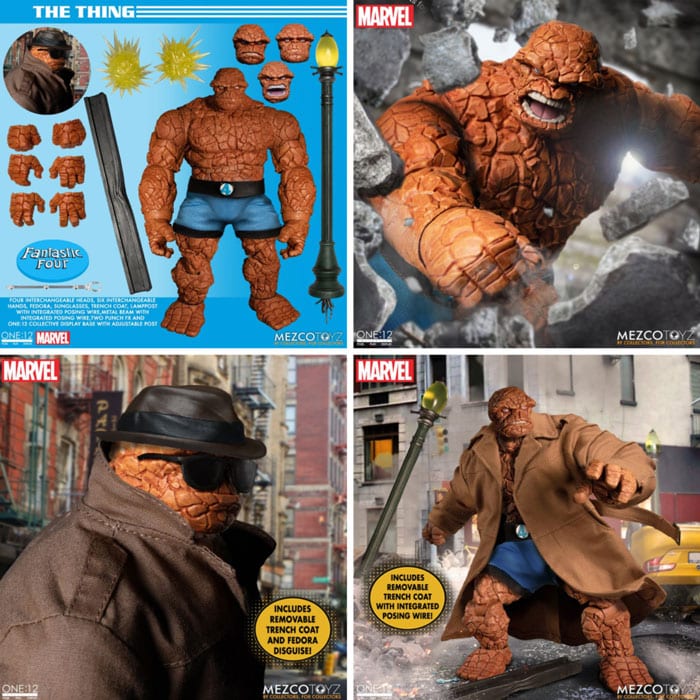 An H.E.R.B.I.E. unit is included, too! He features an onboard supercomputer and mobile lab with a sliding analysis tray, pop-out scope, interchangeable arms, rocket boosters, and a display base.

The Fantastic Four gained superpowers after exposure to cosmic rays during a scientific mission to outer space. The team is dedicated to the betterment of the world through scientific discovery and defense against evil. 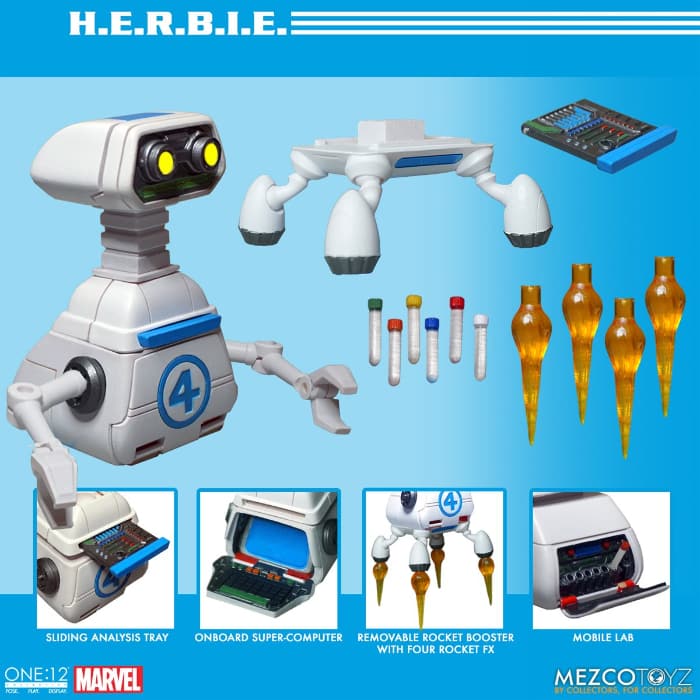 Fantastic Four – Origin and history of Marvel’s family of heroes

The Fantastic Four was the first modern superhero group in Marvel stories. Created in 1961, the group helped inspire and define the new ideas published by the label in the following years.

Marvel created characters such as Spider-Man, Hulk, and even The Avengers from the success stories of the Fantastic Four. The beginning of the group is even seen as the true beginning of the Marvel Universe in comics.

In this way, it is possible to say that the Fantastic Four was responsible for bringing a new kind of story to Marvel. With the group, human dramas began to matter as much as heroic feats – or more. 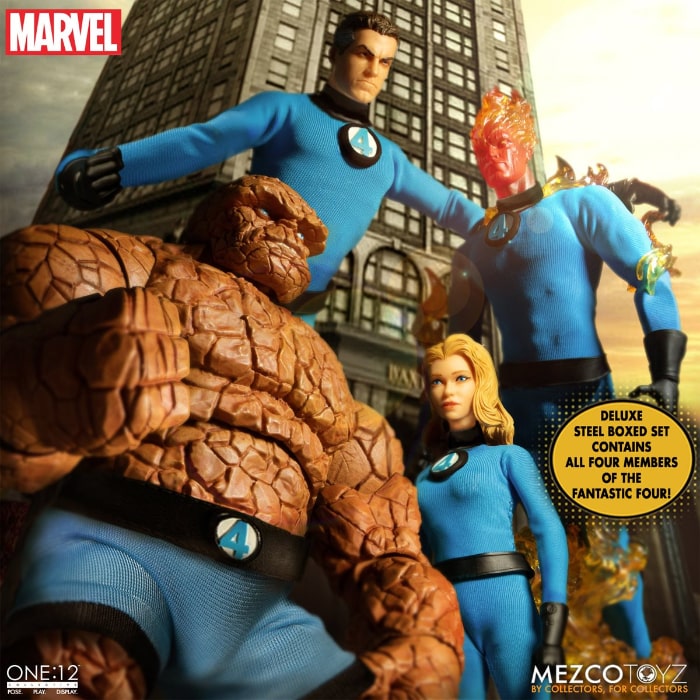 The idea of making a group history came from the meeting of Marvel owner Martin Goodman with one of the owners of DC Comics, Jack Liebowitz. During a round of golf, the DC boss was bragging about the Justice League’s sales numbers, in contrast to Marvel’s crisis. As a result, Goodman realized that a group story could be the solution for the publisher.

At first, the idea was to copy the same concept: put classic heroes together to form a supergroup. However, Stan Lee ended up bringing the original group. The idea came from his wife. She suggested he create a group that broke the standards of the time, originating the Fantastic Four.

In the first issue of the Fantastic Four, the cover already showed the group facing a monster without using uniforms. Although this may seem commonplace for today, the idea of superheroes in civilian clothes was a surprising innovation for the time. 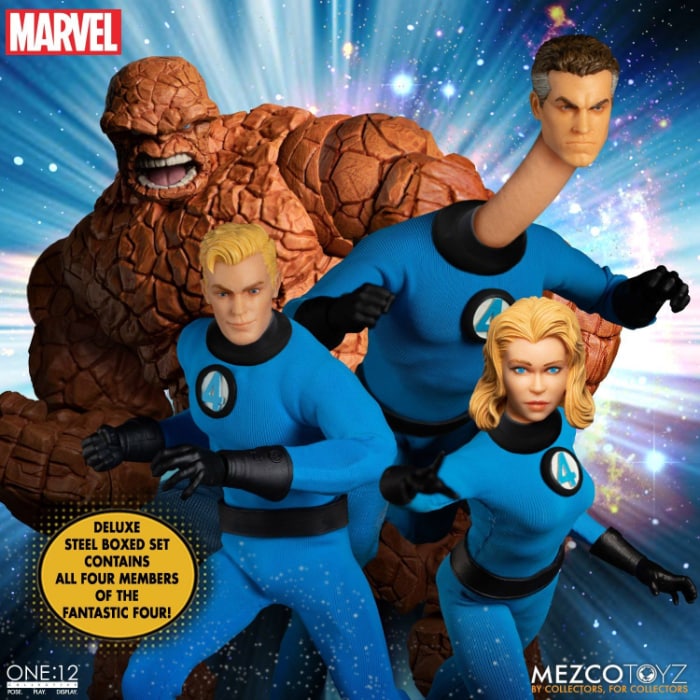 The powers of the Quartet members arise when they are on a spaceship, which ends up bombarded by cosmic rays. The inspiration for their abilities came from the four classical elements, as defined by the Greeks.

Thus, Mister Fantastic has the power to stretch his body and assume any form (water); Susan Storm, or the Invisible Woman, can become invisible and create force fields (air); Johnny Storm, or the Torch Man, can control fire; and Ben Grimm, or the Thing, turned into rock.

At first, Ben Grimm would be a monster unable to turn off his abilities. However, cartoonist Jack Kirby suggested that he was the only one damaged, which directly influenced his personality.

Also called The Thing, he had angry outbursts during his origin but eventually became a father figure with acid humor. On the other hand, Mr. Fantastic carries guilt for not reversing his friend’s situation. 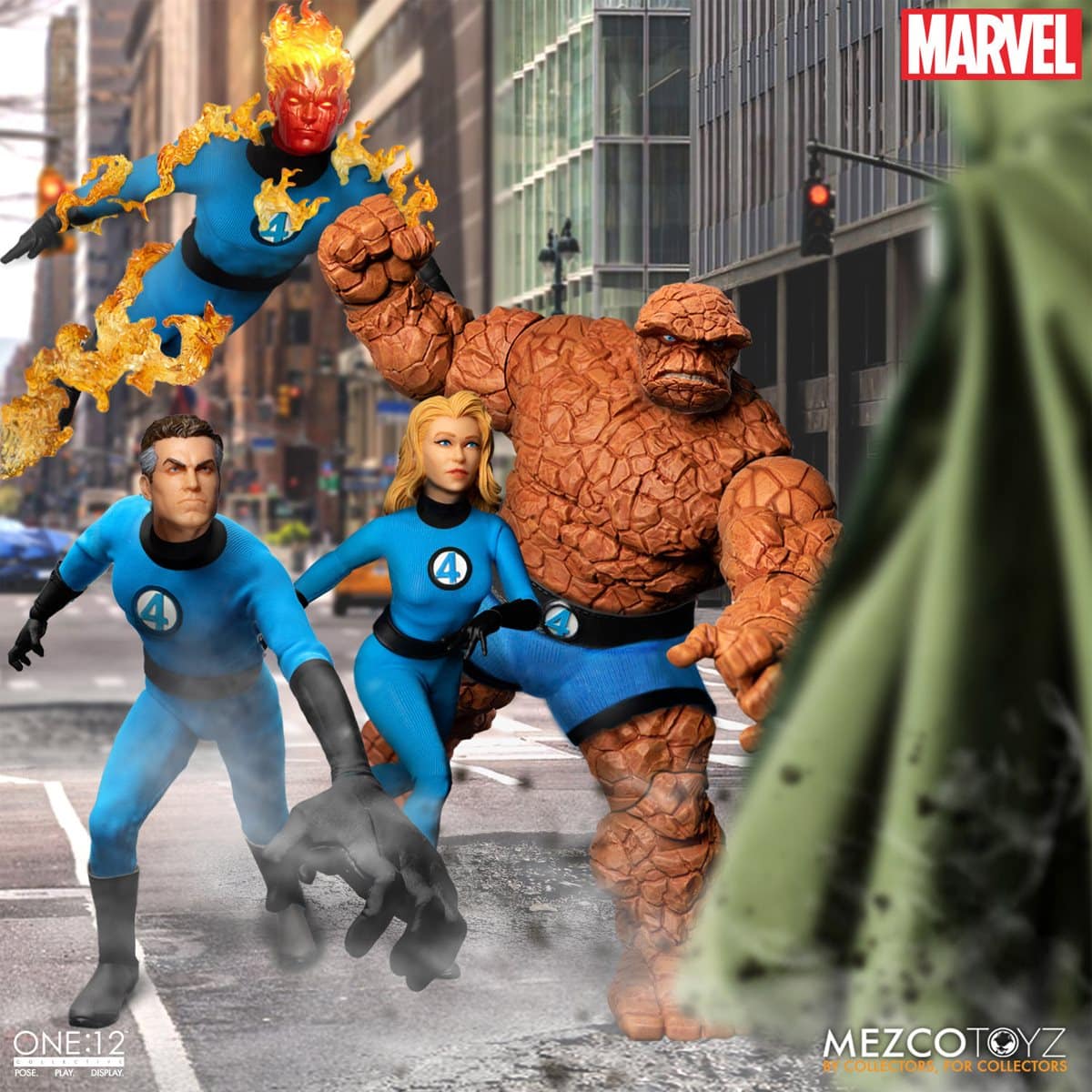 The Fantastic Four’s main adversary is Doctor Fate. He first appeared in Fantastic Four 5 and is a scientist, just like Reed. Leader of Latveria, he wears an iron mask and also threatens other heroes, such as Spider-Man.

In addition to Fate, the Quartet also deals with off-Earth threats, such as Galactus. The villain is a giant alien capable of destroying entire planets by feeding on them. The Galactus story was also responsible for introducing to the group – and to the comic book universe – the Silver Surfer.

Still, in the space environment, the aliens of the Kree and Skrull races are very present in the Fantastic Four stories. Other Marvel characters have also appeared as adversaries of the Quartet, such as Namor.