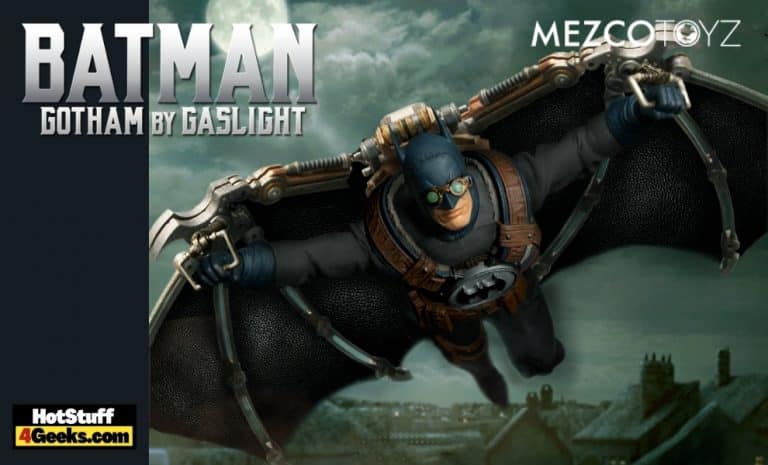 Taking place in the 19th century, the One:12 Collective Batman: Gotham by Gaslight Statue by Mezco Toyz depicts Batman’s debut just as Jack the Ripper arrives in Gotham City.

Imagine an alternative Victorian Age, where Gotham lives under two great fears. One of them, more than uncertainty, a certain uproar of public opinion, is the presence of the vigilante known as Batman. The other is what has been the city’s horror, a serial killer named Jack the Ripper, who has been attacking women in the streets, always at night, putting the police and citizens on a state of alert.

This is basically the overview of Batman: Gotham by Gaslight, the DC Entertainment animation that essentially adapts the comic book A Batman Story – Gotham City 1889, published in 1989.

This 19th Century inspired Batman looks spectacular, particularly with the included glider, which can be posed using the hinged wings either spread for flight mode or collapsed as though landed. Batman also comes with three head options, a Batman Cowl and a pair of goggles. There are ten swap-out hands, and Batman is armed with six throwing knives, four folding Batarang, and a grappling hook.

The figure also features a soft goods cloak, with an internal wire for posing. The figure comes with the usual Display Stand and Post.

The Mezco Toyz: One:12 Collective Batman: Gotham by Gaslight Statue is a Mezco Exclusive and is priced at $115.00. Pre-orders are already live and can be found at the links below. Its release is scheduled for the 1st Quarter of 2022. 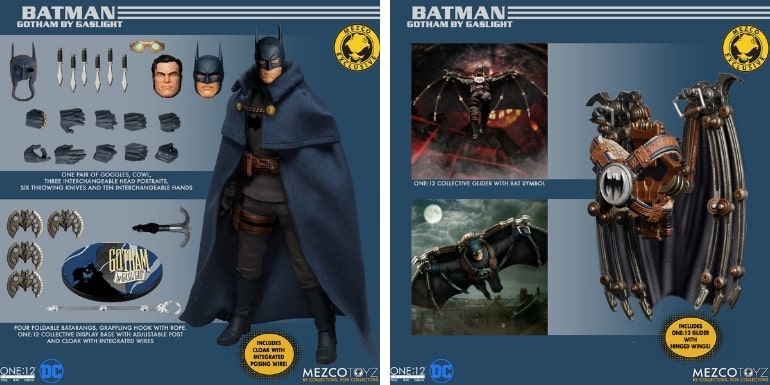 Following an alternate reality of the Gotham we know so well, Sam Liu directs and produces the 30th DC Comics animated film from the script written by James Krieg. The latter, in turn, was inspired by the short story created by Brian Augustyn and Mike Mignola.

The movie takes the entire Batman universe back in time, placing them in 1889. It ensures the presence of a whole cast of villains, transformed into ordinary citizens of Gotham, leading us to see Bruce Wayne crossing paths with the famous singer Selina Kyle, a gang of hooligans formed by the first three Robin,  the exotic dancer Pamela Isley,  a nun named Leslie,  and his best friend, the prosecutor Harvey Dent.

In such a fascinating new world, we see Batman and Commissioner James Gordon team up searching for the skilled butcher who appears in Gotham and who endangers the lives of all the women who reside there.