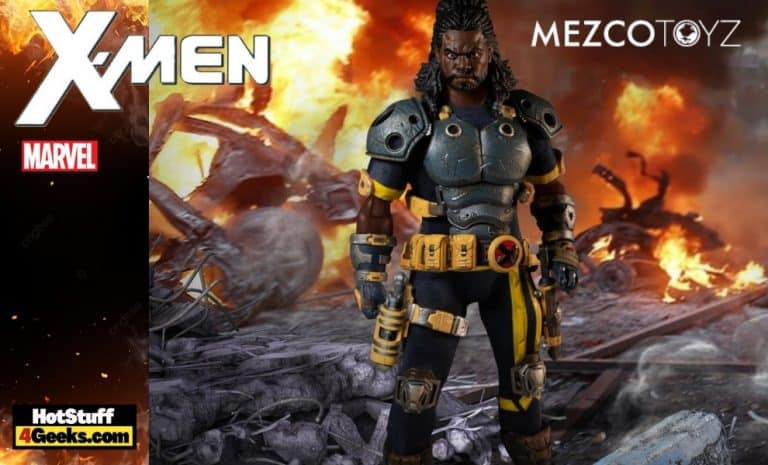 Lucas Bishop is back from the dystopian future as he joins his fellow mutants with the newest Mezco Toyz: X-Men – Bishop One:12 Collective Action Figure release.

Bishop is a time-traveling mutant, created in 1991 by John Byrne and Jim Lee. He quickly became one of the most important and mysterious characters of the series. Although he was initially a hero, he is now considered a villain and enemy of the X-Men.

He first appears as a member of Xavier’s Security Enforcers (XSE), a mutant police force from a dystopian future of the Marvel Universe. He travels to the 20th century and joins the X-Men, a team he knew only as legends.

This legendary time-traveler mutant comes with plenty of firepower and armor, along with 3 interchangeable head portraits, 8 interchangeable hands, a removable paludamentum, an energy cannon, energy blasters, detonator, grenades, and two blaster effects to really bring the heat. As you’ll see, you can really change up his look.

Each One:12 Collective Bishop figure is packaged in a collector-friendly box, designed with collectors in mind.

The 6-inch Marvel X-Men Bishop One:12 Collective Figure from Mezco Toyz is priced at $90.00 and can be found at the links below. Its release is scheduled for November 2021. 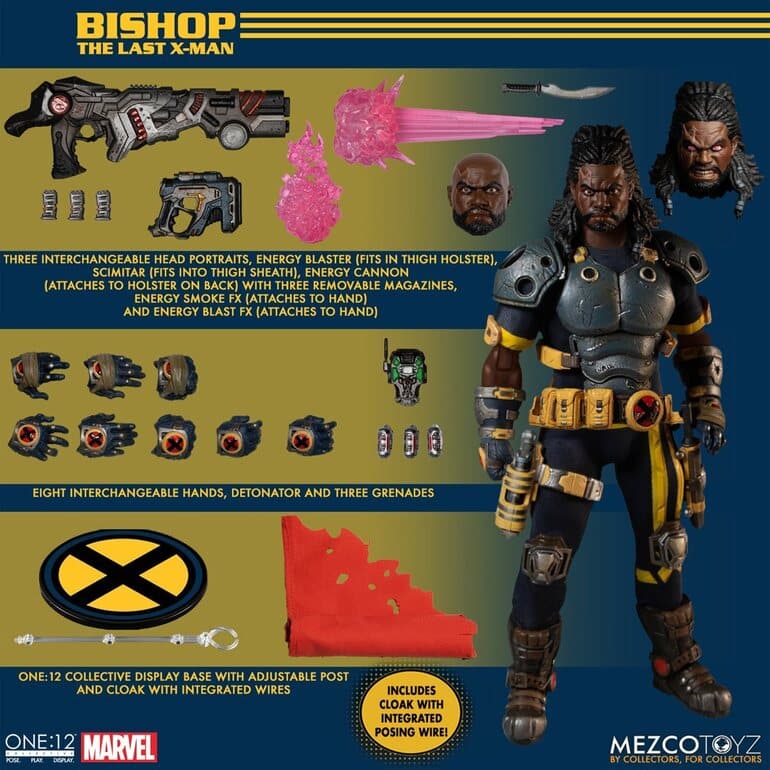 Bishop – The Wronged One

In the comics, Bishop is a mutant who travels to the past to join the X-Men in hopes of reversing the events of their dark future, which the Sentinels completely dominate. Bishop’s powers involve absorbing energy and releasing it upon the opponent.

Featured prominently in several comics stories, Bishop also played a role in the iconic X-Men animation of the 1990s. Unfortunately, the character only appeared once in the movies, during X-Men: Days of a Forgotten Future, and his participation was more than lackluster.

In X-Men: Days of Future Past, Bishop, played by actor Omar Sy, has the same powers as he does in the comics. In the movie, his consciousness is sent to a few days in the past to prevent an attack by Sentinels. After this, his participation in the film is almost nil.

In the end, X-Men: Days of Future Past fails even to show Bishop’s fate, which is not fully revealed in the final act of the feature. Yes, the Sentinel-dominated future has been erased, but what is Bishop’s role in this new future?