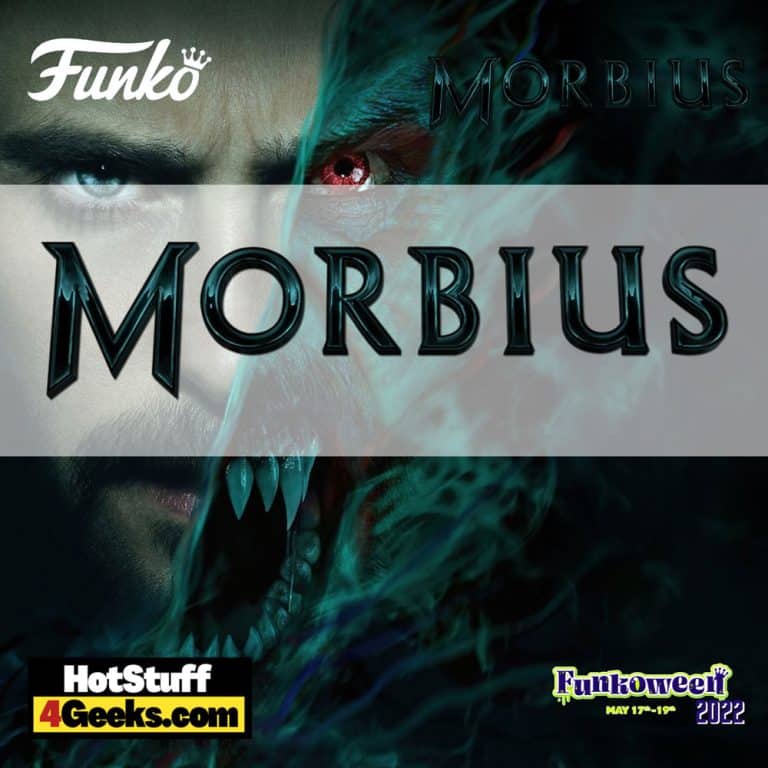 Inspired by the Morbius (2022) film, based on the Marvel Comics character Morbius, the Living Vampire, come new Morbius Funko Pops.

One of the most famous characters in the Marvel Spider-Man universe, Dr. Michael Morbius, is a scientist suffering from a very rare blood disease.

In an attempt to cure himself, he develops a rare form of vampirism. So as he recovers from the disease, he begins to look more and more like a bat, undergoing a mutation that deforms his face, becoming extremely pale, sensitive to light, and gaining powers such as heightened senses and the ability to fly.

And, of course, most notably: an uncontrollable bloodlust.

Here are the pops that are being released:

Morbius Funko Pop! Vinyl Figures (Funkoween 2022) are an unconfirmed release. It is only official when or if Funko announces it. I’ll update more information in the long run.

Morbius got a solo movie this year. The Sony film focused on the hero’s universe and featured Jared Leto as Michael Morbius, a brilliant scientist who became a kind of vampire after a tragic journey.

Despite his debut in the comics in 1971, the antagonist is not as well known as other Spider-Man adversaries, who have already won their own movie versions.

Created by Roy Thomas and Gil Kane in Amazing Spider-Man #101, Michael Morbius has a past linked to unsuccessful scientific experiments.

Born with a rare blood disease, the Greek boy has dedicated his life to studying biology to find a cure for his condition with his best friend, Emil Nikos.

On his journey, he won the Nobel Prize before finding a possible cure in the blood of a vampire bat. The pair developed an experimental serum and electroshock.

After the experiment, he was transformed into a pseudo-vampiric creature with a healing factor, sharp fangs, and superhuman abilities such as strength and agility.

However, this transformation came at a cost, as Morbius began to feel an enormous bloodlust, causing him to kill Nikos.

Fearing for the life of Martine Bancroft, his fiancée, who was also on the boat, and not understanding what was happening to himself, he runs away from the ship where he was determined to drown at sea.

However, he suddenly regains the will to live and begins to swim until he is rescued by another ship bound for New York.

After feeding on the entire crew, he arrives at a house in the swamp. He didn’t know that that place was one of Doctor Curt Connors’ laboratories, which Spider-Man was using.

At the time, the arachnid hero had tried to remove his powers with a serum that left him with six arms. Confused and hungry, Morbius attacks Spider-Man. This is how the great rivalry between them begins.

Established as a villain, Morbius went up against several Marvel universe heroes, such as the Human Torch and the X-Men, and several other clashes with Spider-Man.

However, in 1973, he starred in Vampire Tales, a comic published by Curtis Magazines, a partner publisher of the House of Ideas that focused on vampire stories.

He then took a more anti-heroic than villainous stance. For example, in his first story, when he rescues the innocent Amanda Saint from the Demon-Fire sect, which was looking for a young virgin to perform a sacrifice.

From this point on, he starred in other vampire-focused anthologies until he fell into oblivion. The character slowly came back into the spotlight during the 1990s, when superhero comics plunged into a dark phase.

After making brief appearances in Spider-Man and other superhero magazines, the character was given new life with the creation of the Midnight Sons, a team of supernatural superheroes.

With the introduction of the team formed by heroes such as Blade and Ghost Rider, Morbius got his own comic book in which he searched for the cure for his vampirism, with his posture transiting between villain and anti-hero.

Since then, the Living Vampire has won his own short miniseries and almost appeared at the end of the first Blade film (1998).