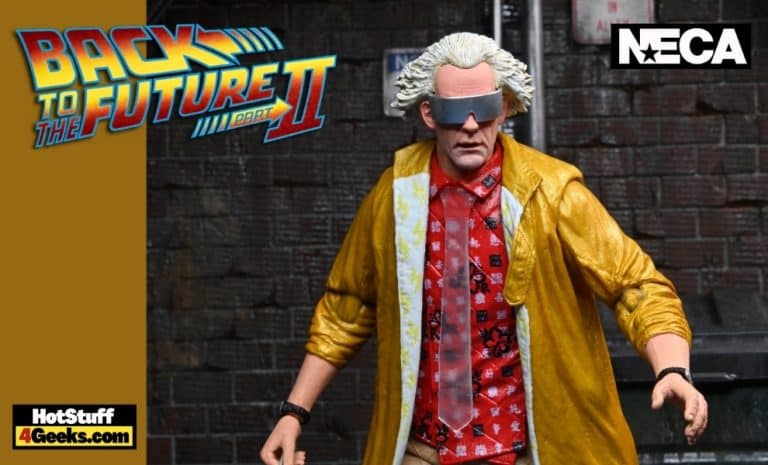 Back to the Future: Part II – Ultimate Doc Brown 2015 Version Action Figure by NECA will be released on the 20th June 2021 (Fathers Day) and will be a ‘first to market’ exclusively at Target stores. There will then be a general release to all other NECA stockists later in 2021.

In the movie Back to the Future 2, Marty McFly goes to October 21, 2015, to prevent his children from turning into unlikeable people. The 30-year journey has become one of the most famous futuristic visions in pop culture and was instrumental in making the trilogy directed by Robert Zemeckis classic. Sneakers that fasten themselves, self-drying jackets, “Jaws 19,” and skateboards without wheels. Cinema was never the same again – and neither were we.

The new images shared as part of the Father’s Day announcement gives us a clear look at the contents of 2015’s version of the Back to the Future 2 Ultimate Doc Brown Figure, which includes three head options, the second pair of hands, Doc’s camera, and his Emergency Cash case, which opens up to reveal the various banknotes within.

The packaging for the set has also been revealed, well, the front at least, and it uses the October 22nd, 2015 newspaper cover for the box art. 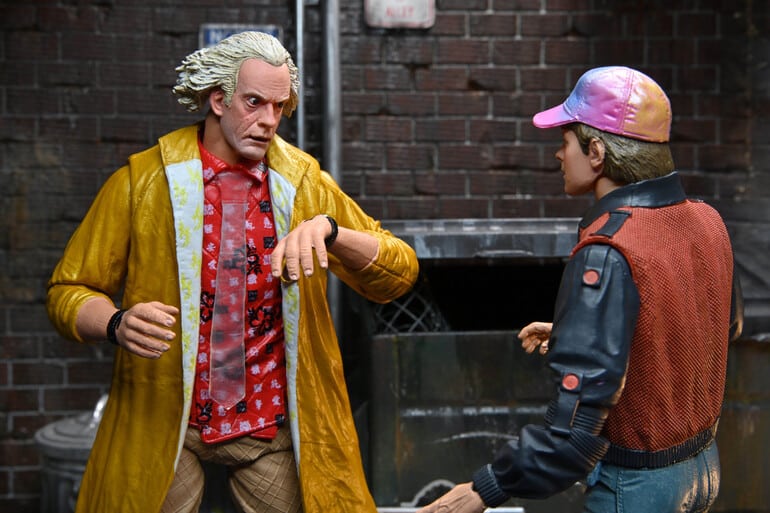 Back to the Future is one of the most famous trilogies of science fiction and always a reference when talking about time travel. Since the first film, released in 1985, several families steal the scenes shot in Hill Valley, no matter the era: the McFly’s Marty, the Tannen’s aggressive Bill and, of course, the Brown family, really essential to the plot for its most important member. Doctor Ph.D. Emmett Lathrop Brown, or, as he is better known, Doc Brown.

During the events of the movie, we learn a little about Doc’s life: inventor of the time machine in the DeLorean by the Flux Capacitor (and, later or earlier – take it as you wish – of the time travel train, during his passage through the Old West), he is considered by many a true mad scientist.

Doc’s character was based on several famous scientists in history, with the highlight being his messy white hair just like Einstein’s. Science is his best friend, and his other companions are Marty McFly, Jennifer Parker (Marty’s girlfriend) and his faithful dog Einstein. Also, despite his affair with Edna in the alternate 1986, he marries Clara Clayton Brown, having two children: Jules and Verne Brown.

And, of course, you can’t talk about Doc without his catchphrase: “Great Scott!“