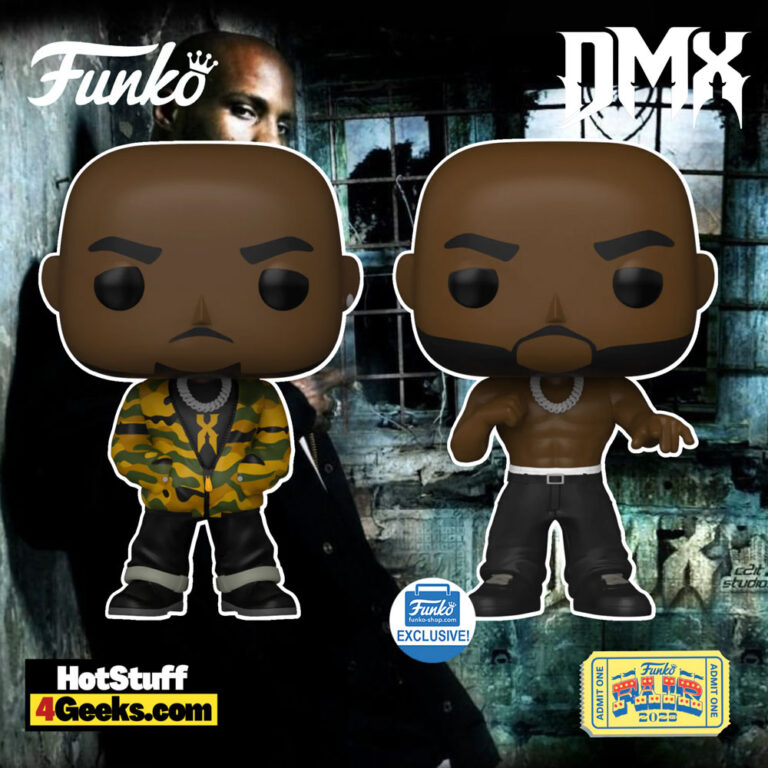 Dark Man X, otherwise known as DMX, who was among the most prolific rappers of his era and stood as a cornerstone of New York hip-hop, is now a pop figure with this new Funko Pop! Rocks: DMX (Dark Man X) Funko Pop! Vinyl Figures (Funko Fair 2023).

The pop figures are now available for pre-order at the links below – click to jump or scroll to continue reading.

DMX, or Earl Simmons, is an American rapper, actor, and songwriter who rose to fame in the late 1990s. His unique delivery and dark lyrics characterize DMX’s signature style.

He has released eight studio albums, all certified platinum or higher by the Recording Industry Association of America (RIAA).

In addition to his musical career, DMX has also appeared in several films, including Belly, Romeo Must Die, and Cradle 2 the Grave. He has also had roles on TV shows such as Def Comedy Jam and Friday Night Videos.

The DMX Funko Pops are here and ready to show the world what it stands for dynamism and mystery!

The figures capture the elements that have made rapper DMX a hip-hop icon since the early 2000s:

DMX (Dark Man X) Funko Pops! (Funko Fair 2023) are now available for pre-order at the links below (click to jump!) 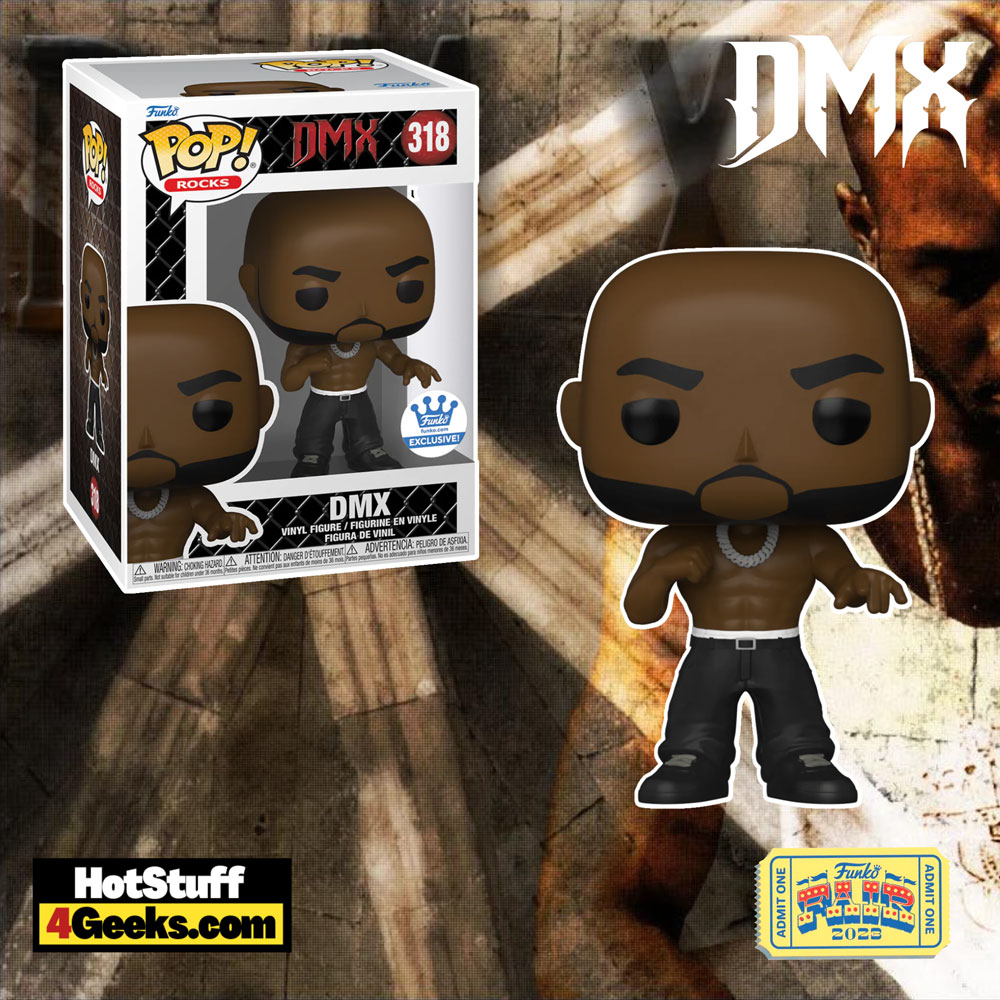 Earl Simmons was born in Mount Vernon, New York, on December 18, 1970. He grew up in Yonkers, a town north of the Bronx that was, in the 1980s, the scene of significant racial tensions and problems related to crime and violence.

DMX, also known as Dark Man X, is the product of Earl’s complicated life; his childhood and adolescence were spent on the streets, in foster homes, and in juvenile detention facilities, where he developed the habit of writing. 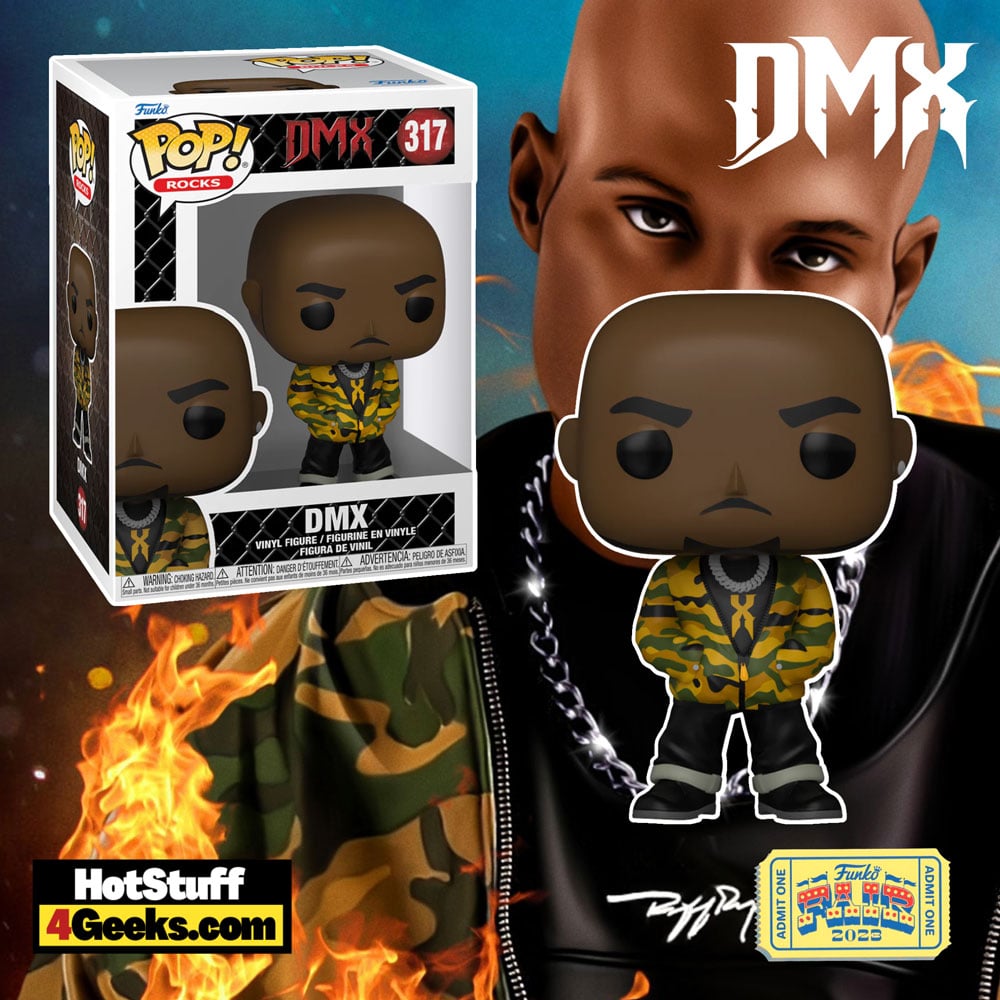 He suffered abuse from his mother and her partners and turned to crime and drugs as an escape.

In his song “Do You,” he says that to be like him, one must “grow up neglected by both parents and still pull through.”

In January 1991, The Source magazine released DMX into the mainstream, mentioning him in the Unsigned Hype section – some of the names that had passed through that section were The Notorious B.I.G, Eminem, and Mobb Deep.

For the next two years, he continued to maintain a presence in the hip-hop world in New York as a beatboxer, but it wasn’t until 1993 that he signed with a label.

He releases his first single, “Born Loser,” with Columbia Records, but it is not very successful, and he leaves the label. Shortly after, he joins Rick Rubin and Russell Simmons in Def Jam, a label that has released names like Snoop Dog and Kanye West.

It was with Def Jam that DMX’s career reached great heights. He released two albums in 1998, now classed as classics of 90’s hip-hop horrorcore. It’s Dark, and Hell is Hot, and Flesh of My Flesh, Blood of my Blood reached the number one spot on the Billboard 200 that same year. He was the second artist to achieve this feat. Tupac Shakur was the first, in 1996.

Earl reached the peak of his career in 1999 when he performed at the Woodstock music festival and released the album, And Then There Was X, which won him the best rap album award at the 2001 Grammys. The album also reached Platinum certification five times.

In 2001 he presented the album The Great Depression and made Grand Champ history. DMX was the first artist to achieve the number one position on Billboard for five consecutive albums. The following years rocked the musician’s career, who in 2008 served a 90-day sentence for animal cruelty, drug possession, and theft. In 2010, he returned to prison for reckless driving.

Undisputed (2012) and Redemption of the Beast (2015) are the last two albums by the rapper who marked hip-hop for its rawness and confronted listeners with the reality he lived, wrapped in trauma.

He left us at 50, but his gruffness, flow, and lyrics will continue to mark hip-hop.