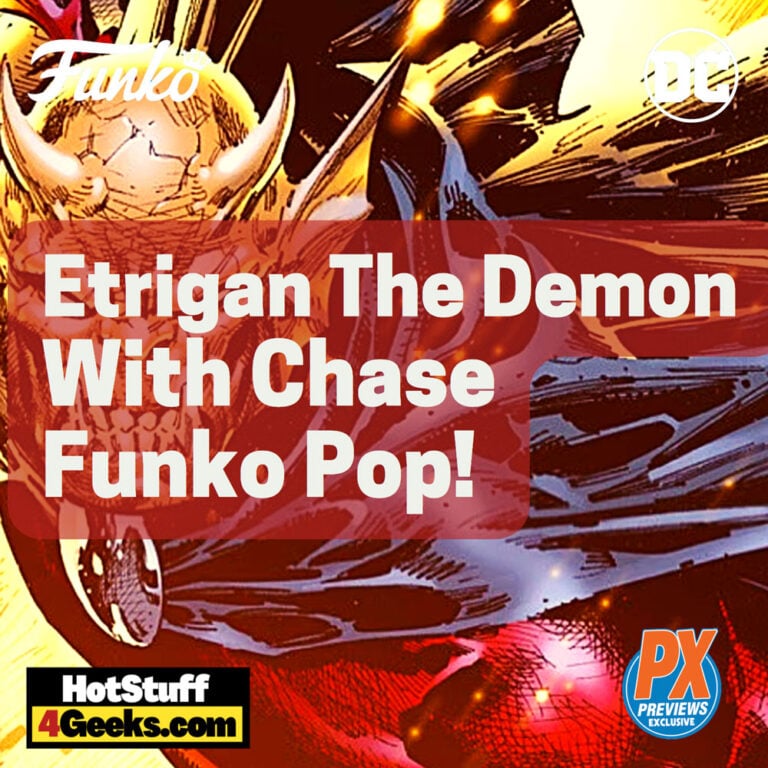 The new Funko Pop! DC Heroes: Etrigan The Demon Funko Pop! Vinyl Figure – PX Previews Exclusive depicts Etrigan, a fascinating and complex character who has been a staple of DC Comics for over 50 years.

Etrigan the Demon is one of those characters that you can’t help but love, even though he’s downright evil. He’s a Lord of Hell who Merlin summoned during the time of King Arthur.

He’s been bonded to a human named Jason Blood, which gives him a measure of humanity.

While Etrigan is often portrayed as an evil character, he has also been shown to be capable of compassion and heroism.

He’s also immortal. And he likes to rhyme. A lot!

In addition to his abilities as a Demon Lord, Etrigan is also a skilled poet and often employs rhyming couplets in combat.

As a result, he is one of the most unique and entertaining characters in the DC Universe.

The PX exclusive, Etrigan The Demon Funko Pop!  is an unconfirmed release. It is only official when or if Funko announces it. I’ll update more information in the long run.

Etrigan The Demon is a DC Comics character who first appeared in The Demon #1 in 1972. He is a chaos-bringer bound to the Earth by the wizard Merlin.

When summoned, he takes on the form of a muscular, demonic humanoid with sulfuric yellow skin and burning red eyes. He typically speaks in rhyme, and his catchphrase is “There is no justice, only me!”

Etrigan is one of the most powerful demons in the DC Universe, and his chaotic nature has often put him at odds with other heroes. However, he has also been known to team up with them occasionally, mainly when the stakes are high.

He first came to Earth when he was summoned from Hell by his brother, Merlin, to help defend Camelot against the witch Morgana Le Fey.

When everything ended, Merlin imprisoned Etrigan in the body of a human being named Jason Blood, who involuntarily carried the Demon for centuries.

Jason Blood became immortal from that point on, sharing the same body. However, they are often at odds with each other as Blood has a significant level of guilt based on Etrigan’s demonic actions.

Etrigan is fiercely independent and often struggles against Blood’s efforts to control him, but the two have formed a strong bond over the years and can call upon each other in times of need.

Being a demon, Etrigan has many supernatural powers, including flight and enhanced senses; he is also super strong, on par with Wonder Woman, and able to fight Superman.

Etrigan is also not just highly resistant to pain; he actually enjoys it.

But perhaps his most remarkable power is the hellfire he breathes from his mouth; it’s a destructive force capable of burning his opponent alive and leveling entire buildings.

Etrigan is also a highly skilled magician. He can manipulate time, and the elements have demonstrated psychic powers and command many infernal forces thanks to his rhyme.

Etrigan is truly a force to be reckoned with!