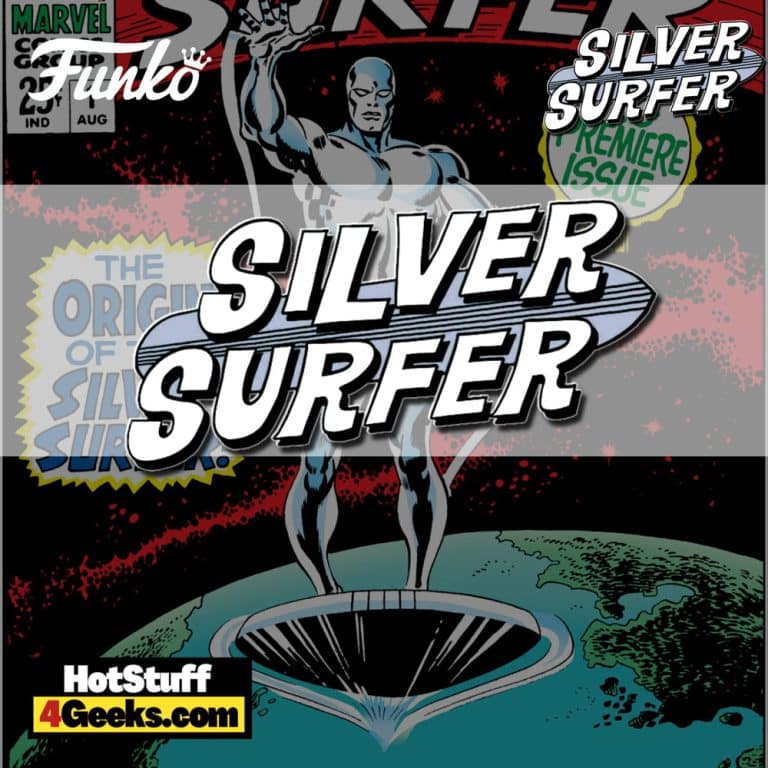 Created as an antagonist of the Fantastic Four, the Silver Surfer soon developed a very peculiar personality, embarking on a quest for redemption and becoming one of the greatest heroes of the Marvel Universe…

Silver Surfer was created by artist Jack Kirby and writer Stan Lee and first appeared in Fantastic Four #48 (1966) as loyal to Galactus in a Fantastic Four story.

He is a humanoid alien with silver skin who travels on a surfboard-like vehicle and is often regarded as one of the most powerful beings in the Marvel Universe.

He is from the planet Zenn-La and was once a herald of Galactus, the devourer of worlds. However, he later turned against Galactus and became a defender of Earth.

The Silver Surfer is one of the most popular characters in the Marvel Universe and has been featured in many comics, movies, and TV shows over the years.

Funko Pop! figure of Siver Surfer on a comic cover, is an unconfirmed release. It is only official when or if Funko announces it. I’ll update more information in the long run.

Since his first appearance, Silver Surfer has always presented himself as a character-focused on introspective and philosophical thoughts. So much so that many fans believed that Surfer was a lyrical self for Stan Lee in the comics. Through the character, the author expressed his opinions and reflections.

Before gaining his identity, Silver Surfer was Norrin Radd. Norrin was from the planet Zenn-La, where all problems were eliminated. The perfect society, however, was not viewed with peace by everyone.

Not understanding the meaning of life in the face of such a perfect world, Norrin’s mother committed suicide, something that her husband was to repeat. Alone, the boy studied the history of the planet.

Things changed when Galactus, the devourer of planets, invaded Zenn-La. Norrin intervened and asked him not to devour the planet, even offering himself as a servant to the villain.

From this moment on, Galactus gave some of his Cosmic Power to Norrin. He took the form of a warrior from his childhood fantasies and became the Silver Surfer.

With this transformation, the Surfer was charged with searching for planets capable of providing Galactus with energy. But, to spare unnecessary deaths, he sought out only worlds without inhabitants.

He relies on a board made of the same material covering his body to travel between planets. The object has a telepathic connection, allowing faster-than-light-speed and interdimensional travel.

Because of the Cosmic Power that the Surfer carries, he can destroy anything he encounters and has numerous abilities, including flight, cosmic energy manipulation, and matter transmutation.