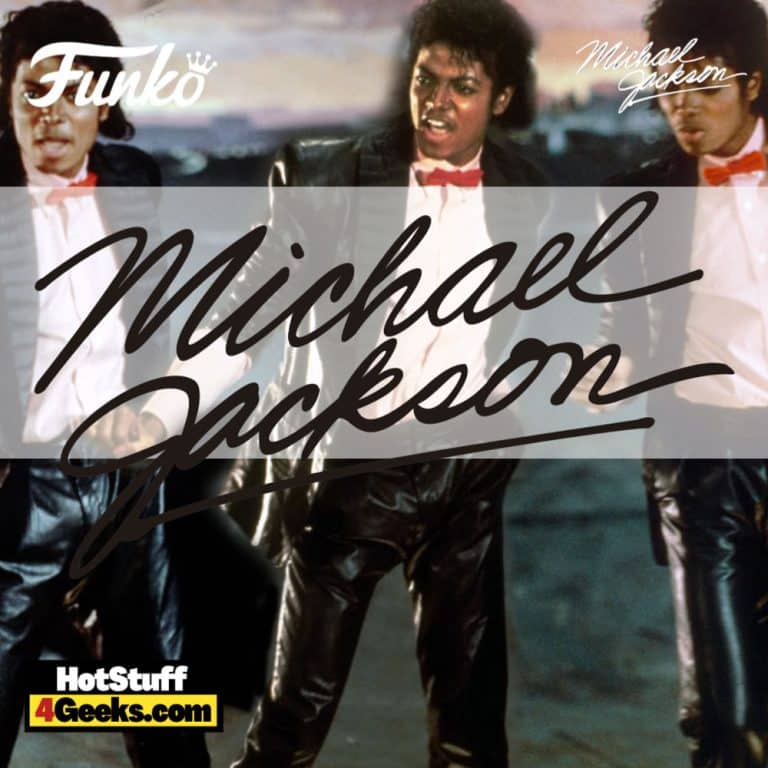 Inspired by one of the most popular and influential pop songs of all time comes the new Funko Pop! Rocks: Michael Jackson (Billie Jean) Funko Pop! Vinyl Figure.

The late great Michael Jackson was known for his iconic fashion sense, and nowhere is this more evident than in the Billie Jean music video.

The all-black leather jacket and trousers made Jackson look both sophisticated and stylish. But, of course, no discussion of Jackson’s outfit would be complete without mentioning the now-famous red bow tie and white shoes.

Michael Jackson’s Billie Jean is one of the most iconic songs of the 1980s. The song tells the story of a young man being pursued by a woman he doesn’t know.

The song’s signature bassline and Jackson’s distinctive singing voice helped make it one of the decade’s most popular songs.

Billie Jean was also notable for its groundbreaking music video, which featured Jackson performing dazzling dance moves in front of a backdrop of city streets.

The video was influential in popularizing music videos as a promotional tool for artists. Today, Billie Jean remains one of Jackson’s most famous songs, and its impact can still be felt in the world of pop music.

Michael Jackson (Billie Jean) Funko Pop! is an unconfirmed release. It is only official when or if Funko announces it. I’ll update more information in the long run.

There is no doubt that Thriller was the pinnacle of Michael Jackson’s career. The album, released in 1983, exalted the singer’s genius to the world, revolutionizing the pop world, and became a sales phenomenon.

Although the title track is the most remembered because of the costumes, the makeup, and the choreography of the clip, other songs make the album incredible.

One example is Billie Jean, which reached the top of the charts and was chosen to perform the legendary Moonwalk featured in Michael Jackson’s biography.

The song, written by Michael, was inspired by a fan’s obsessive relationship with the singer and only entered the album as a track thanks to the artist’s insistence.

Just like other songs named after women, Billie Jean also had an inspiring muse.

In the early 1980s, Michael Jackson was a prominent figure. Going into his second solo album after his breakup with the Jackson 5, the group that had propelled him to fame, he attracted the attention of the press and public spotlight.

As it happened with rock stars and bands, the fans, also called groupies, tried to approach him to make platonic declarations of love.

And Michael had a sinister experience with one of them. In 1981, the singer started receiving letters from a young woman who claimed to be the mother of his son.

Along with the messages, the girl, whose identity was withheld, sent pictures of the child, pointing out physical similarities, such as “he has your eyes.” Creep, isn’t it?

Claiming to be in love with MJ, the woman’s contact became more intense, and she even made threats against her own life. These statements frightened Michael, and he began to have constant bad dreams about the situation.

After all, what would he do if she knocked on his door? What if she hurt herself or someone else?

Fortunately, nothing more serious happened. But, months later, Jackson discovered that the young woman had been admitted to a psychiatric clinic. We know what musicians do with unusual stories, don’t we? They turn them into hit songs!

But Billie Jean has almost left off Michael’s most excellent album.

Producer Quincy Jones didn’t think the song was strong enough for the album and feared that the fictitious name chosen for the girl would be associated with tennis player Billie Jean King.

The singer fought his corner to defend the song’s potential, and he succeeded. Billie Jean has been a hit since its debut, was the perfect soundtrack to the iconic Moonwalk presentation to the world, and even won two Grammy Awards.