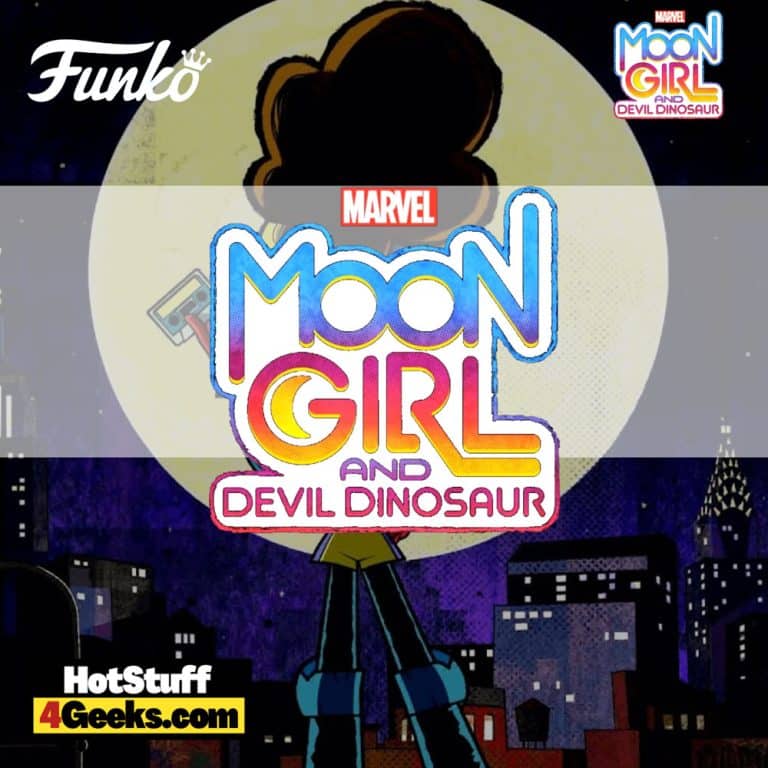 And a new Marvel superheroine is about to hit the small screen. Disney Channel is producing the animated series Moon Girl and Devil Dinosaur, inspired by the comic books released by Marvel in January 2016.

Produced by Disney Television Animation and scheduled to premiere in the summer of 2022, the series follows the adventures of brilliant 13-year-old Lunella Lafayette and her 10-ton Devil Dinosaur.

Devil Dino 6-Inch Super-Sized Funko Pop!  is an unconfirmed release. It is only official when or if Funko announces it. I’ll update more information in the long run.

Moon Girl made her debut a few years ago and has gained a lot of notoriety and many fans, especially young children.

She is a great heroine and role model for young audiences, full of vivacity and cleverness and always accompanied by her Devil Dinosaur. She has also been involved in some spectacular Marvel moments in the comics.

Despite her recent popularity, Moon Girl is not a very old heroine. Her first appearance took place in January 2016, and she has already come on strong, starring in her own solo magazine – which to date already has over forty issues and should continue to be published.

The heroine was created as part of Marvel’s All-New, All-Different initiative to bring new characters and stories to the House of Ideas. Her first stories were written by Brandon Montclare and Amy Reeder, with art by Natacha Bustos.

Lunella Lafayette was before she became a superhero, a bright girl living in Manhattan. She attended public school and stood out for her incredible intellect, which at the same time made her become an “outsider” among her classmates.

They then nicknamed her Moon Girl because she lived with her thoughts far away. From her studies, she eventually created a device capable of opening portals, which opened a rift between Earth-616 and the Dinosaur World, where her greatest ally came from.

The Devil Dinosaur emerged from this alternate reality, followed by a band of villains. He caused a lot of destruction upon his arrival. Still, eventually, he teamed up with Lunella because he understood her commands, and together they stopped the villains from Dinosaur World.

It is worth mentioning that Dino has been around for many years. He debuted in 1978 in Devil Dinosaur magazine. In his world, Dino had a very peculiar partner called… Moon-Boy – a hominid from a tribe of prehistoric beings who died shortly before he came to Earth-616.

The young dinosaur Devil was almost burned to death by a tribe of Killer-Folk but was rescued by Moon Boy, a young member of a rival tribe. Exposure to the fire activated a mutation in the dinosaur that gave him greater powers than others of his kind, and his skin turned olive-green to red flame.