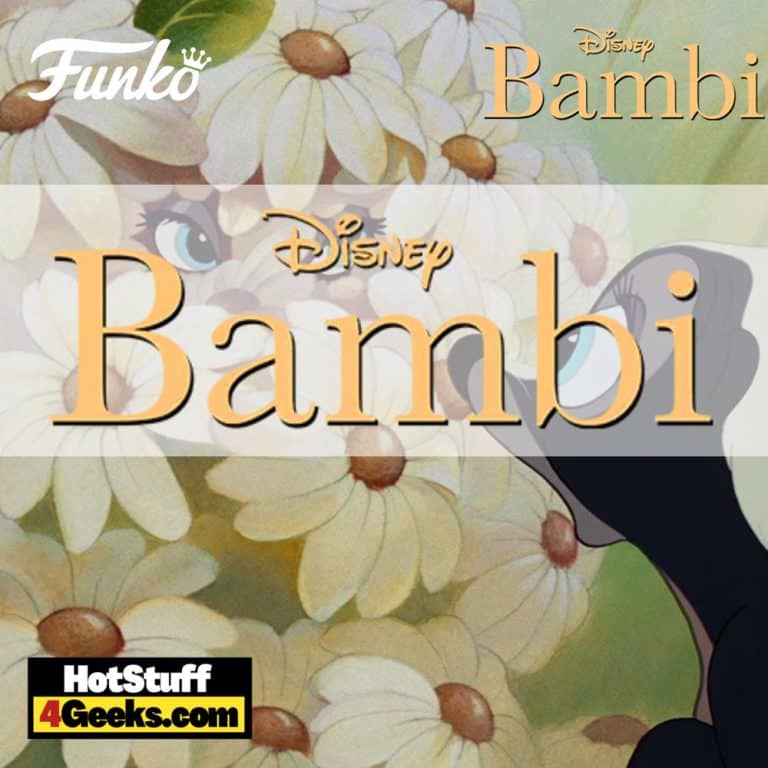 The new Funko Pop! Bambi: Scented Flower Funko Pop! Vinyl Figure from the classic Disney movie Bambi features Flower in his iconic black and white outfit and it’s a simple way to capture the joy of this timeless tale.

But what makes this figure truly unique, however, is the fact that it is scented! The figure emits a light floral scent that is sure to please any fan of the film.

Whose heart doesn’t melt when the sweet skunk, Flower, says, “That’s OK, he can call me a flower if he wants to.”

When Flower first appears in Disney’s 1942 animated film, Bambi, he is seen as a pest by the other forest animals. However, over the course of the film, he slowly wins over his fellow forest residents through his acts of kindness and friendship.

By the end of the film, Flower has become an important member of the Forest community, and his distinctive aroma is no longer considered to be a nuisance.

Instead, it is seen as a sign of Flower’s unique personality and charm. In many ways, his story illustrates the importance of accepting others for who they are, rather than judging them by their appearance.

Flower Scented Funko Pop! is an unconfirmed release. It is only official when or if Funko announces it. I’ll update more information in the long run.

Flower was one of the first characters to be created for Disney’s 1942 animated feature film, Bambi. Modeled after a real-life skunk that animator Fred Moore had encountered in his California backyard, Flower was intended to add a touch of comic relief to the film.

However, the character proved to be more popular with audiences than the filmmakers had anticipated, and Flower went on to become a key player in Bambi’s story.

Despite his small role in the film, Flower has remained a fan-favorite character for over seventy years, inspiring spin-off merchandise and even his own themed attraction at Disneyland.

Thanks to his lovable personality and signature smell, Flower will always be remembered as one of Disney’s most iconic characters.