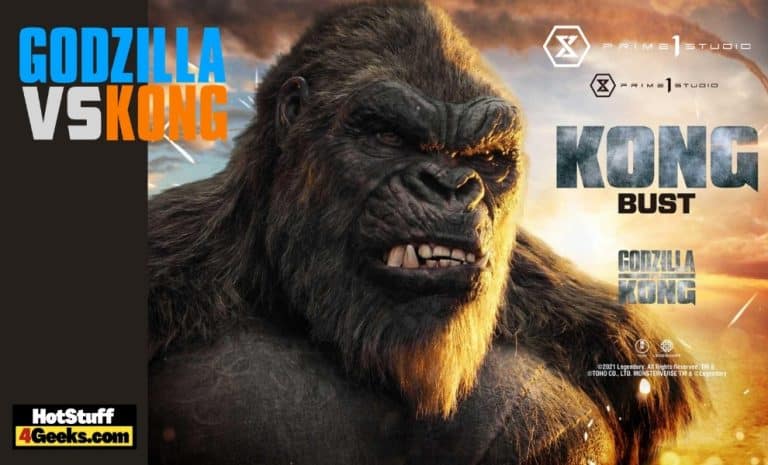 Straight out from the movie and as seen in the newest Monsterverse film, Godzilla vs. Kong, a new Kong 26-Inch Bust comes to life right before fans’ eyes, powered by Prime 1 Studio.

Made from a mix of silicone and resin, each strand of hair was patiently implanted by hand. All wounds, wrinkles, and skin pores were faithfully recreated, and the finished work is of the highest quality. The eyes, made of glass, are also implanted and can convey the character’s complex personality and the experience accumulated over decades of battles.

Kong is placed on top of a pedestal design after Skull Island and Hollow Earth, as seen in Godzilla vs. Kong. On the back, an inner Kong is sitting on his throne, surrounded by stalactites while holding his newly acquired Battle Axe. 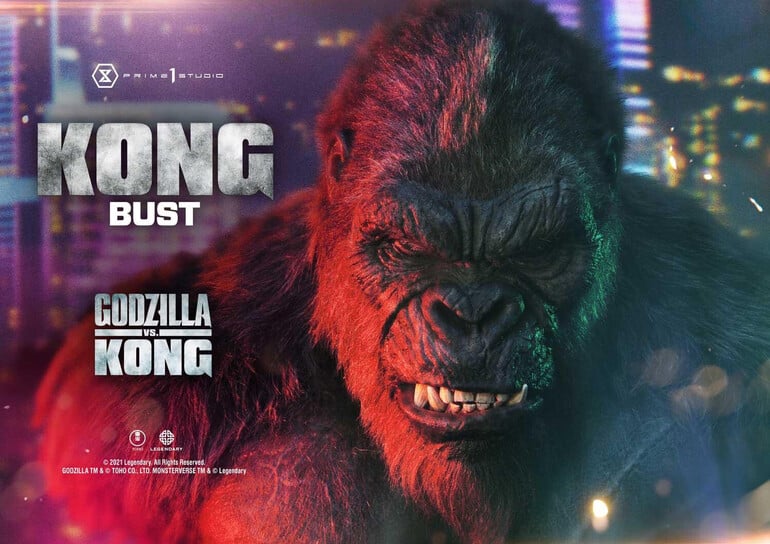 In 1933, the planet was introduced to what would become one of the most iconic monsters in the history of cinema and all fictional history – King Kong!

The monster, which is actually a giant gorilla, was created by American filmmaker Merian C. Cooper for the movie King Kong. Although he looks like just a giant gorilla, King Kong has a fascinating set of skills, some of which are not common!

King Kong is an excellent climber, able to climb mountains, buildings, or other tall structures with great ease. He is also extremely resistant, rarely showing signs of exhaustion, and his body can also withstand explosions and heavy artillery fire.

Intelligence is another important factor of this character. He can distinguish his allies from his enemies and take advantage of his surroundings when fighting his opponents. Another characteristic is his speed, which for a monster of his size is quite impressive.

Finally, we have to mention his strength. King Kong is a mighty monster capable of incredible feats. Many say he is stronger than Godzilla himself. 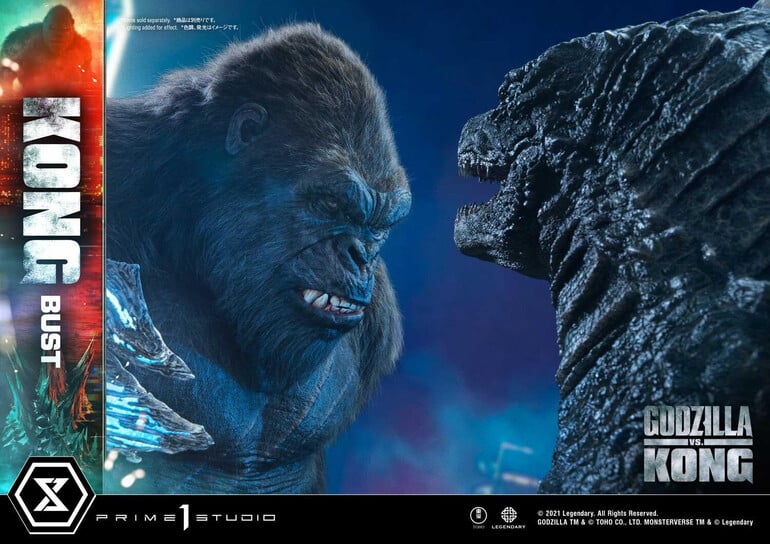 Product Description from the Manufacturer:

“Prime 1 Studio is incredibly proud to present the next salvo in the epic war between Titans: KONG from Godzilla vs. Kong!

With our 26-inch-tall Kong Bust, we have proportionately scaled Kong down to the size of a human person, but his striking features and raw, savage power remain FULL-SIZED!

Our sculptors at Prime 1 Studio have fastidiously crafted a replica bust to bring pride to any collection. Every wrinkle and pore in his battle-worn face has been carefully sculpted to show his decades of combat with the horrid creatures of Skull Island. We have painstakingly recreated Kong’s scarred chest, menacing teeth, and threatening expression. We have equipped Kong with specially manufactured glass eyes to reflect the complex personality and decades of experience they contain within! And most of all, to preserve the realistic nature of his thick coat, our craftsmen have meticulously hand-punched each of his hair strands, one by one, into his silicone and polystone understructure! This fantastic bust can only be described as a labor of love.

From the front, Kong’s bust sits above an Iwi Village fortification on a Skull Island-themed base, his home for decades. From the back, another Kong sits victoriously on his Hollow Earth throne, surrounded by naturally painted stalactites, stalagmites, and the ruins of this long-extinct kingdom. Intricately painted and clutching his main primary defense against Godzilla’s Atomic Breath, Kong surveys his future home with his ancient Battle Axe. And, for a brief moment, all is right with the world. Then, all hell breaks loose with a deafening challenge from his Alpha rival!

Choose your fighter by ordering this incredible bust today! Or order them both for an incredible head-to-head combat spectacle!

If you’ve already preordered another product from our Godzilla vs. Kong line: the Godzilla Bust LSGVK-01, check out our campaign to save $100 on your way to owning this whole collection!”