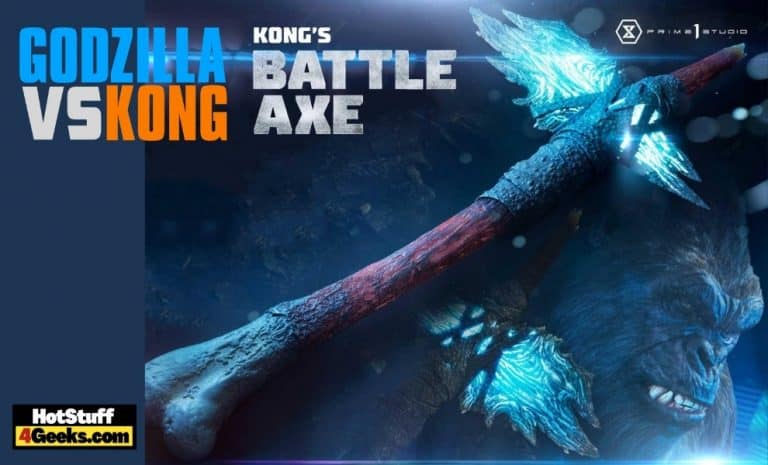 Prime 1 Studio unleashed their newest Godzilla vs Kong collectible. The Kong’s Battle Axe has arrived in glorious detail, LED functionality, and coming in at a massive 36 inches tall.

In Godzilla vs Kong, to take down the sea monster, Kong is equipped with a new cutting-edge weapon: an axe with incredible powers. Unable to rely on his physical strength alone, the mysterious object proves to be a valuable resource in eradicating the enemy.

Found in the soil of the Hollow Earth, it lights up when it comes into contact with the gorilla, revealing a mysterious force. Powered by Godzilla’s waves, it allows Kong to deliver the killing blow to Mechagodzilla in a final fight.

Prime 1 Studio captures the detail on this collectible perfectly, and it will be a dream piece for any King Kong fanatic. The Battle Axe is removable from the Hollow Earth Stalagmite-themed base and can be wielded by any worthy collector who can get their hands on one. It’s cast in polystone and other materials.

Godzilla vs Kong – Kong’s Battle Axe Prop Replica from Prime 1 Studio is priced at $899.00. Pre-orders are already live and can be found at the links below. Its release is scheduled between July 2022 and October 2022. 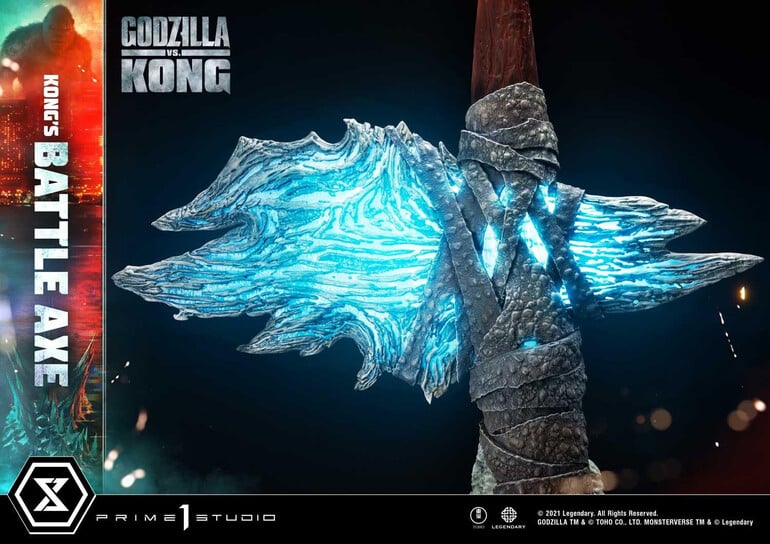 The Origins of the Kong Axe

Although the fight between Godzilla and Kong was relatively balanced, it was clear the winner was the current King of the Monsters, who was much faster and tougher than usual. However, if Godzilla proved superior in physical combat and there was a war between the two species, how did Kong’s ancestors end up matching each other in strength and managed to exterminate much of the Titan’s kind? The answer may lie in the new weapon Kong uses to fight Godzilla, his radioactive axe.

During an interview with the screenwriter and film director, they were asked about the weapon the King of the Apes used to fight. Director Adam Wingard wanted to keep it a secret and explained that, yes, there is a deeper reason why the Axe was there and its source of power. Wingard also stated that the history and weapon’s powers would be better explained in future movies.

Screenwriter Max Borenstein added a few points and said that Axe is made of a long bone with a radioactive current from creatures of Godzilla’s own species or at least similar species. Borenstein also said that Kong’s ancestors knew how to forge simple tools, which indicates the possibility that the King of the Apes’ species used tools for combat. 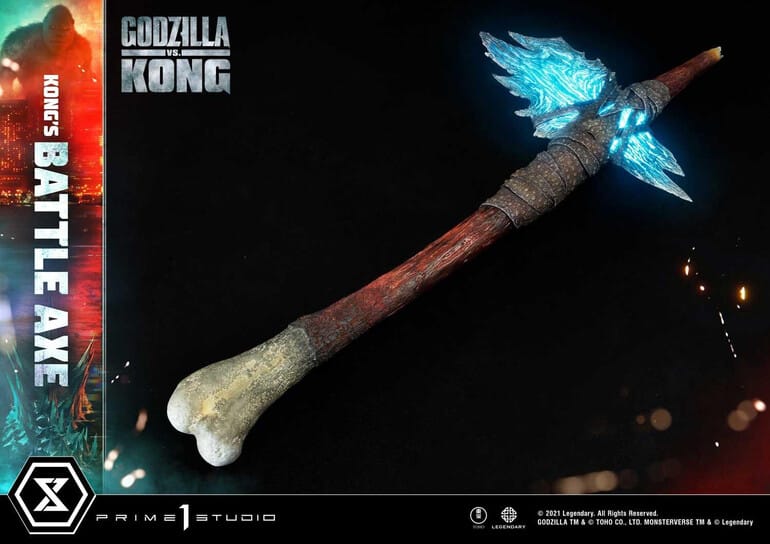 Product Description from the Manufacturer:

“Prime 1 Studio is extremely excited to announce an amazing replica from the world of Godzilla vs Kong: Kong’s BATTLE AXE!

Reaching an impressive 36-inches tall, Kong’s Battle Axe was meant to fit in the palms of your hands! Made by Kong’s Hollow Earth civilization-building ancestors, this ancient Battle Axe was formed from the indestructible long bone of a Titan, strips of ancient reptile hide, and most importantly, an Atomic Dorsal Plate from one of Godzilla’s terrifying ancestors!

The skilful sculptors at Prime 1 Studio have replicated Kong’s iconic weapon exactly as it appeared in the movie. Our talented painters have rendered each material in the Battle Axe differently, with multiple layers of paint and weathering to create a realistic-as-possible replica. Not only that, but we’ve also imbued the Atomic Dorsal Plate with LED Illumination to recreate the Battle Axe in its charged-up mode!

Kong’s Battle Axe situates nicely within its Hollow Earth Stalagmite-themed base. Display it proudly in your collector’s cave or wield it to recreate the most exciting scenes from the movie!”