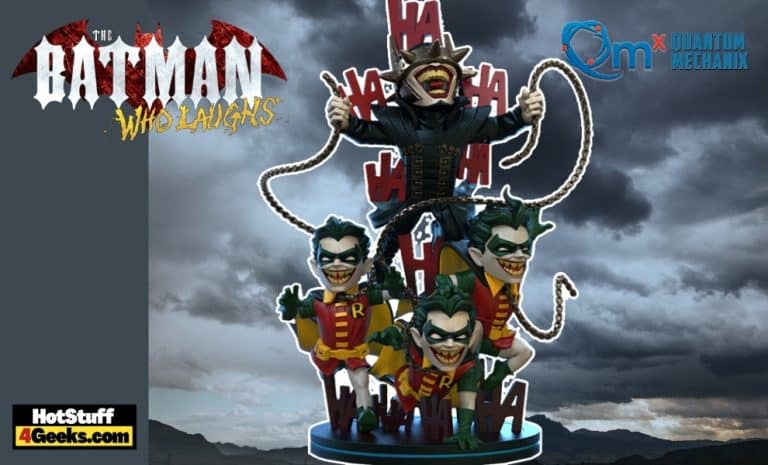 DC’s Dark Nights: Metal arc brought one of the most surprising and well-known alternate versions of Batman in recent times: The Batman Who Laughs, living proof of what could happen if Batman and the Joker were merged into one being.

The villain is much more than an “evil Batman.” He is the ultimate expression of the Joker’s evil genius and Batman’s physical and mental prowess, a significant threat to the DC Multiverse and the publisher’s main heroes.

Batman Who Laughs Q-Fig Max Elite features the nefarious foursome surrounded by the Joker’s unmistakable laughter, three Rabid Robins, and this Batman’s weapon of choice – a deadly metal chain. Batman’s horrifying metal crown empowers him with the ability to discover the fears of his victims, resting just above the gleeful grin once belonging to the clown prince of crime.

Find the Batman of your dreams (or nightmares). Quantum Mechanix: Dark Nights Metal Batman Who Laughs Q-Fig Max Elite is priced at $49.99. Pre-orders are already live and can be found at the links below. Its release is scheduled for June 2021. 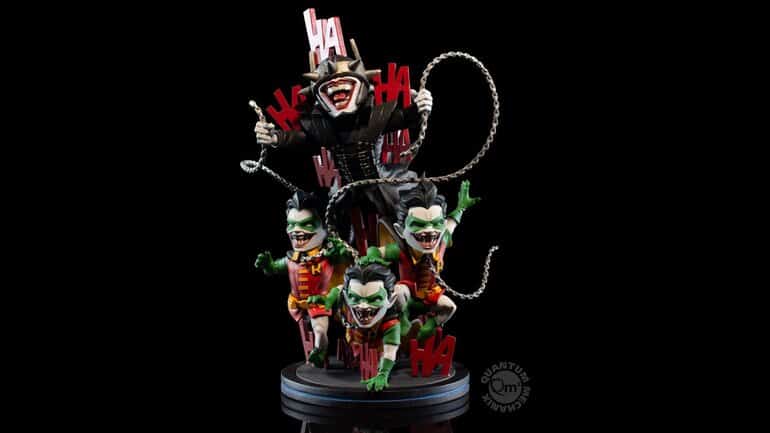 The Batman Who Laughs originated on Earth -22 and is part of DC’s Dark Multiverse.

His story began to differ the day the Joker discovered that Batman and Bruce Wayne were the same. This caused the Clown of Crime to murder other heroes’ enemies, such as the Penguin, Catwoman, Crocodile, and the Ventriloquist. He also took the life of Commissioner Gordon, one of the Dark Knight’s most important allies.

The Joker then brought many Gotham’s citizens into contact with the same substances that resulted in his transformation. His ultimate goal was to murder the parents of many children so that they would be transformed into a mixture of him and Batman.

The hero appeared to interrupt the plans of his famous enemy. The Joker died, but the clash brought Bruce into contact with a purer form of these substances.

Gradually, the billionaire succumbed to the effects of these compounds until he became the Batman Who Laughs: he had Batman’s intelligence and strength mixed with the Joker’s psychopathy and sense of humor.

The Batman Who Laughs became an unstoppable force: he killed almost all of his former allies from Earth-22, turned his son, Damian Wayne, into a “mini Joker,” and even recruited the children affected by the villain’s substances to be his servants. Little by little, he realized that this process was irreversible…