The new Funko Pop! Television: The Peacemaker – Peacemaker with Peace Sign Funko Pop! Vinyl Figure – San Diego Comic-Con (SDCC) 2022 and Funko Shop Exclusive will be available starting July 21st, 2022, at 6 am PT at the links below (click to jump!)

Peacemaker is a character who is all about peace… even if he has to go to war to get it!

He’s the DC Universe’s answer to Captain America, and he’s just as patriotic… and just as willing to use some brutal tactics to achieve his goals.

He’s a powerful symbol of peace, and he’s ready to fight for what he believes in… even if it means getting his hands dirty.

So don’t be fooled by his name… Peacemaker is a warrior for peace, and he’s ready to add some firepower to your collection!

The SDCC 2022 exclusive, Peacemaker with Peace Sign Funko Pop!, can be found at the links below once the online sale begins (click to jump!)

Christopher Smith first appeared in 1966 as a supporting character in Charlton Comics’ Fightin’ 5 #40.

In this first version, Smith was an Air Force pilot with a talent for designing his own weapons and dedicating his life to promoting world peace.

Although he never intended to use his weaponry, he soon saw violence as the only option to achieve world peace.

After the demise of Charlton Comics in the mid-1980s, DC Comics acquired the Peacemaker and published a four-issue mini-series in 1988.

Since then, this vigilante antihero has not rested in his quest for peace at all costs.

However, the story of the Peacemaker told through the comics differs from the HBO Max series. 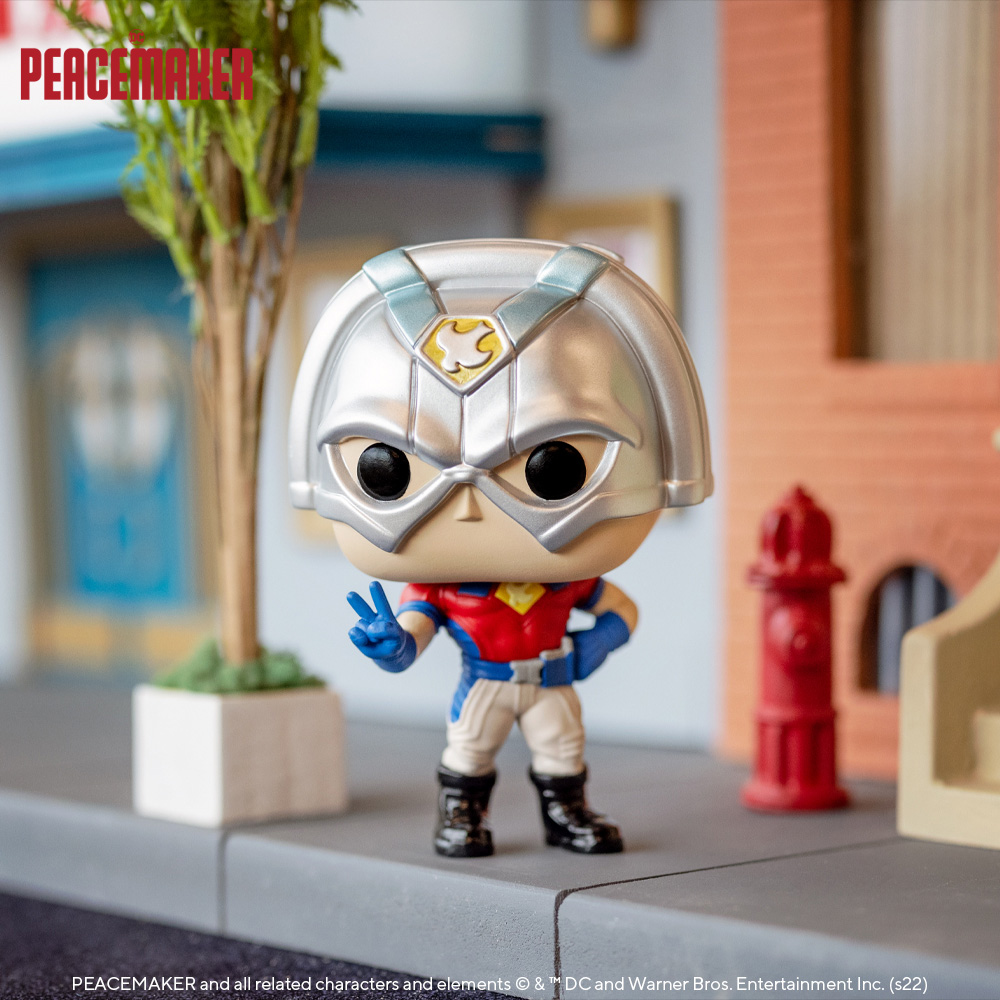 In the comics, Christopher’s father was a Nazi who participated in World War II and committed suicide in front of his son when he was only five years old.

From then on, his father often appeared in Chris’s visions. For now, the series keeps the character of the White Dragon – the Pacificator’s father – although the first episode reflects the complicated relationship between the two, showing how the father offends and criticizes many of the things his son does.

In any case, the Peacemaker has had a complicated life, and it is because of the traumas of his childhood and youth that Christopher seems to suffer from various mental problems.

He has bipolar disorder and paranoid schizophrenia, which generate an excessive distrust of others, as well as hallucinations, to the point that he convinces himself that his helmet contains the souls of all the people he has ever killed.

Eventually, when he resurfaced years later and encountered Blue Beetle, the Peacemaker’s mental illness was no longer apparent.

Although his experiences have significantly impacted his character, making him a passionate advocate of peace – “regardless of how many men, women and children have to die in the process” – there is still much to be discovered about the Peacemaker’s history and personality.