Spawn: Raven Spawn, The Redeemer, The Violator and The Clown Action Figures 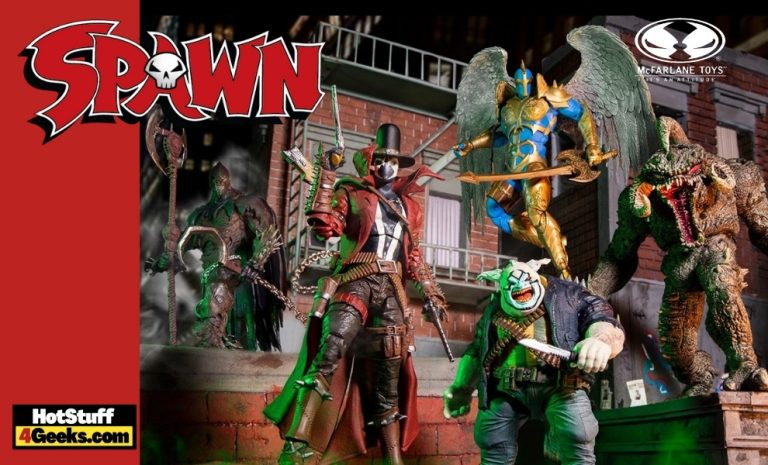 Pre-orders have popped up for the new Spawn’s Universe 7″ Scale Figures by McFarlane Toys. The figures are from the first wave of the new Spawn Universe line, with many more planned for the future.

Spawn, created by Todd McFarlane, is one of the best-selling monthly comics globally, with millions of copies sold in over 120 countries. In 2019, Todd McFarlane made history with the release of issue 300 of Spawn and then broke the record with issue 301. This brought the artist the Guinness World Records achievement for the longest standalone series.

In addition, Spawn has an Emmy-winning HBO animated series and a feature-length live-action movie (by New Line Cinema) that has grossed over $100 million worldwide.

McFarlane Toys collectibles are award-winning and known worldwide for raising the bar and redefining the art of action figures.

Spawn: Raven Spawn, The Redeemer, The Violator, and The Clown Action Figures by McFarlane Toys are now available for pre-order at the links below (click to jump!) They are set to be shipped in September 2021. 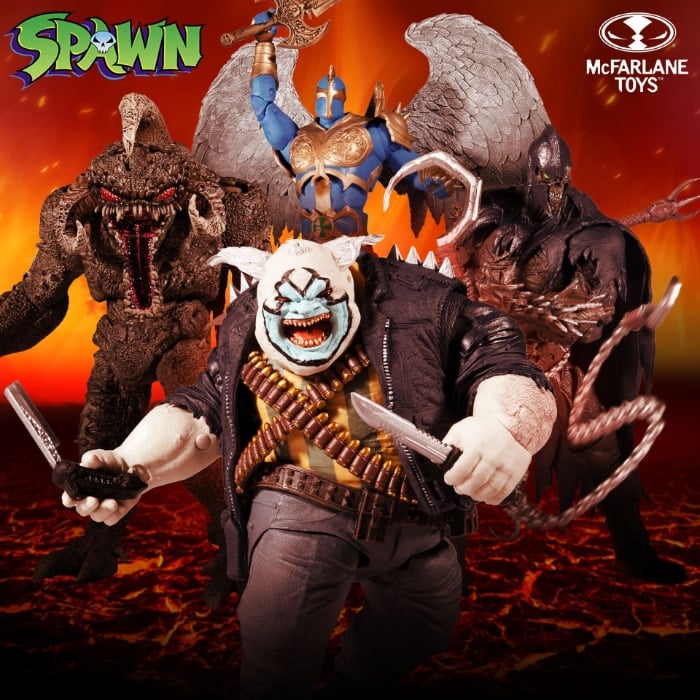 The story begins with a creature called Spawn, who does not quite know what he is, until due to the appearance of many secondary characters, some infernal and others angelic, he discovers that he is a Hellspawn, that is, a soldier of the army of hell …

The Spawn Wave 1 Raven Spawn 7-inch, scale action figure comes with an axe, scythe with chains, display base, and comes packaged in a window box. Raven Spawn has up to 22 points of articulation for a full range of pose and play.

The demonic lord Kray-Von Gore, and one of Malebogia’s Death Knights, was credited with creating the K7-Leetha as known as the Hellspawn Suit. The symbiotic suit adapted itself to its host to create a Hellspawn. He was defeated, and the suit was sealed away in the Necro-Stone. Anyone who found the stone was endowed with a Hellspawn suit and became a Spawn.

Please note: This item may have variants randomly inserted throughout the production run. We cannot accept requests for specific variants, nor can we accept returns on opened items. The item you receive may be different from the one pictured. 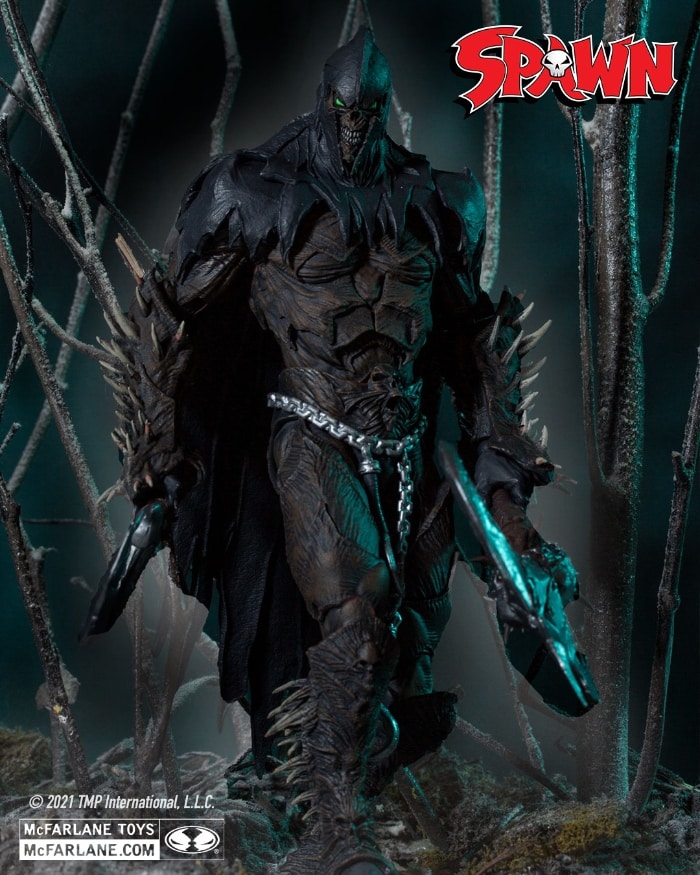 The Spawn Wave 1 Redeemer 7-inch scale action figure comes with a sword, display base, and comes packaged in a Spawn-themed window box. The figure has up to 22 points of articulation for a full range of pose and play.

The Redeemer is considered the Anti-Spawn, heaven’s equivalent of Hell’s Hellspawn. A powerful religious warrior infused with heavenly matter and purpose to be a durable loyal warrior of God.

A mysterious organization known as The Ethereal Masters chose worthy mortals to be the host of the Redeemer and transform into angelic warriors to battle Hell. Unfortunately, the Redeemer typically retains no knowledge of their mortal lives even if they return to the mortal realm.

However, the current Redeemer Eddie Frank not only retained his memories but, fueled by his rage towards the Hellspawn’s made him the most powerful Redeemer to date. 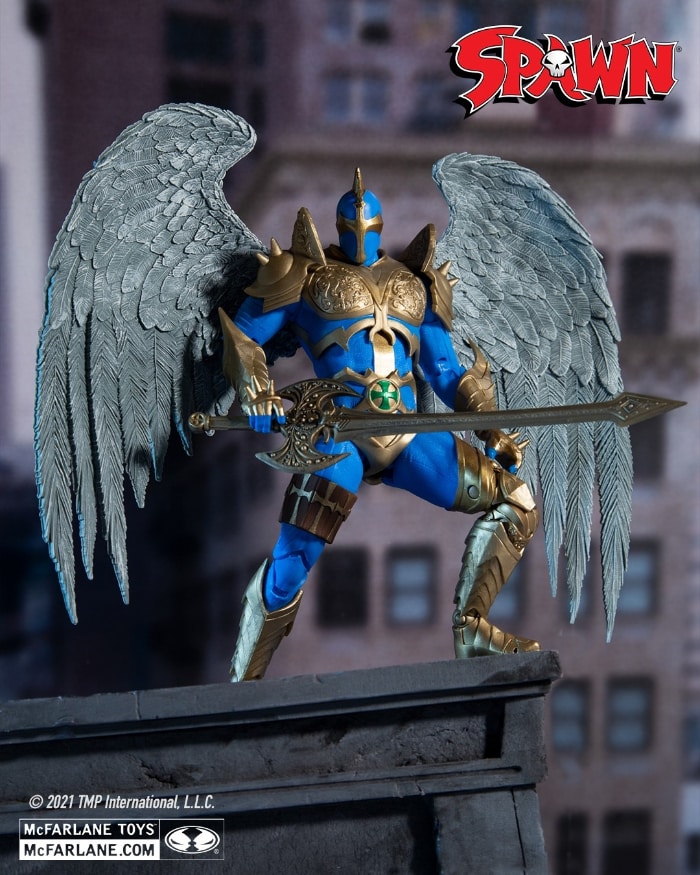 The Spawn Violator Megafig Action Figure is a behemoth at 9-inches tall with up to 22 points of articulation with a moving jaw. Violator comes packaged in a Spawn-themed window box.

Eldest of the five siblings known as The Phlebiac Brothers, Violator is a powerful demon of hell who worked for Malebolgia. Able to shapeshift, possess humans and animals, as well as an array of other powers, he was sent to earth to train Al Simmons when he became a Hellspawn.

Violator, however, likes to do things his way and often antagonizes, manipulates, and gets in the way of Al Simmons on every possible occasion. To even to his own detriment of being at odds with Malebolgia and his brothers, Violator is self-serving and vindictive and a major pain in Spawn’s ass. 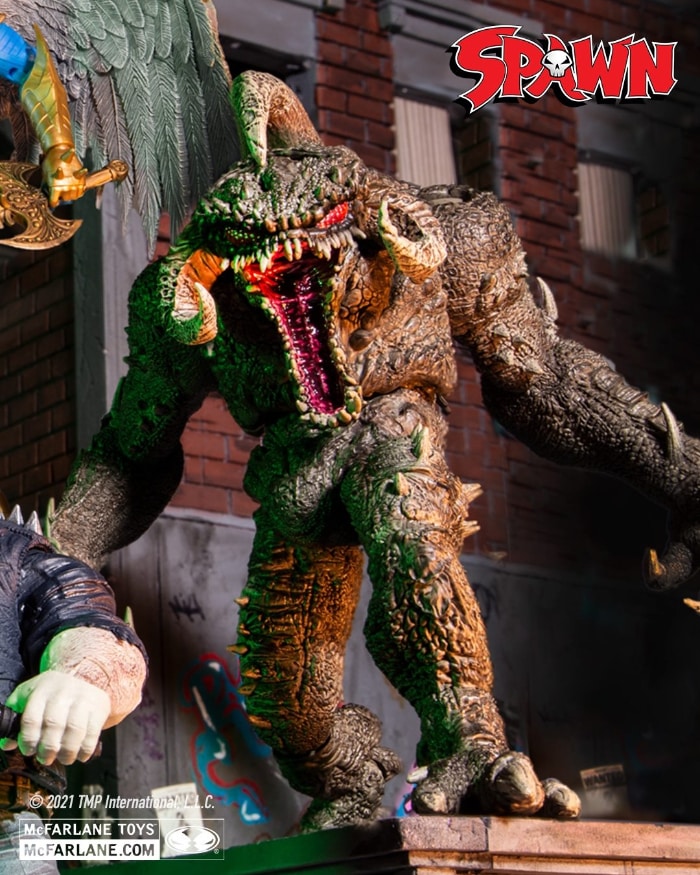 The Spawn, The Clown Deluxe Action Figure Set, comes with a knife, razor blade, backpack rocket launcher, 2x machine guns, display base, and packaged in a Spawn-themed deluxe window box packaging. The 7-inch scale features up to 22 points of articulation for a full range of pose and play.

The Clown, a short, obese, ugly clown with rotting teeth and a blue mark in the shape of an M on his face, is the alter ego of The Violator. Dubbed his secret identity and human disguise, he uses this ruse to walk among the humans to avoid detection.

Though Violator has shapeshifting powers to turn into anything he would wish, Violator has such distaste for humans. He shifts into this putrid form to mock them because he sees them as disgusting, pathetic, and weak. 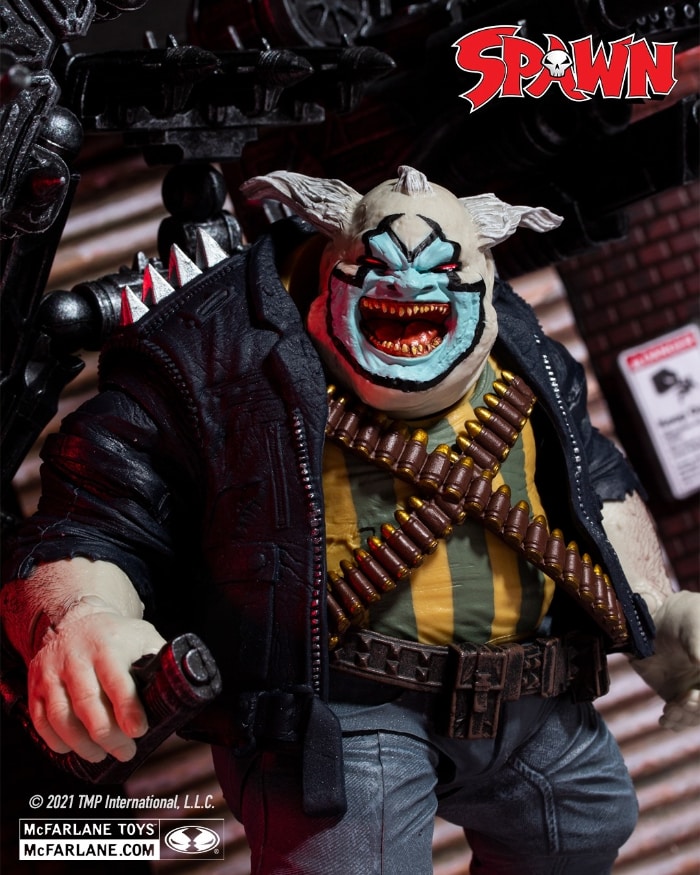