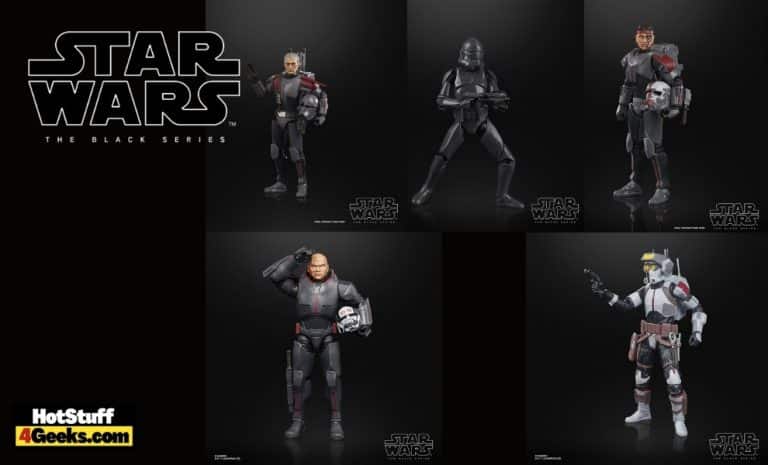 We are fast approaching May the 4th when we celebrate all things Star Wars. With that in mind, Hasbro has already released 6-inch Black Series figures for Bad Batch members Hunter, Crosshair, Wrecker, and Tech along with an Elite Squad Trooper.

Every figure is now available for pre-order. Prices range from $19.99 to $24.99. While they quickly sold out at Hasbro Pulse, you can try ordering at the links below.

–> Star Wars: The Black Series 6-Inch Hunter Figure: Leader of The Bad Batch, is a strong and stoic soldier with keen senses that give him an edge when tracking down targets. It features premium detail and multiple points of articulation.

–> Star Wars: The Black Series 6-Inch-Scale Wrecker Figure: The boisterous bruiser of the Bad Batch, Wrecker has brute strength that makes him capable of lifting a clone gunship without any help. Aside from your help, of course. The figure includes a blaster, helmet, sword, and backpack accessories.

–> Star Wars: The Black Series 6-Inch Tech Figure: His genetically enhanced brain can puzzle through technical issues at speeds even faster than some droids. The 6-inch figure includes a helmet, blaster, and tools.

During the Television Critics Association Winter Press Tour, Disney revealed the premiere dates for some of its series, including Star Wars: The Bad Batch. The spinoff of The Clone Wars will premiere on May 4 of this year, also known as Star Wars Day.

Star Wars: The Bad Batch follows the elite clones of the Bad Batch, who find themselves in a rapidly changing galaxy after the events of The Clone Wars. Each of the Bad Batch members possesses a unique ability that makes them a formidable team of soldiers.

The series is led by several veterans of the Star Wars franchise, including Dave Filoni, Athena Portillo, Brad Rau, and Jennifer Corbett.