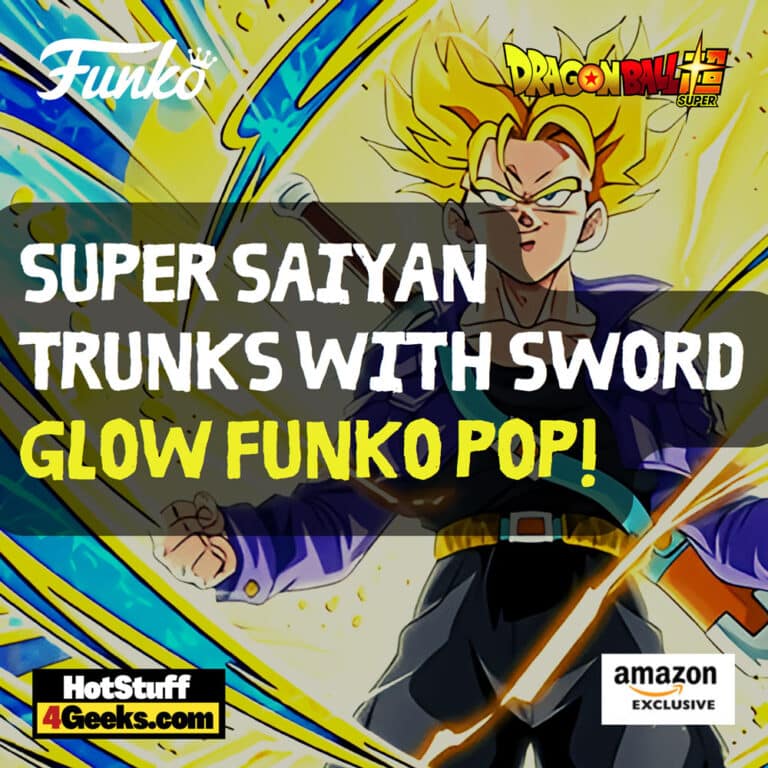 Trunks was always a force to be reckoned with. Even as a child, he was able to hold his own in battle. But he knew he had to step up his game when the androids came. So he trained day and night until he finally achieved the Super Saiyan form!

Trunks is a mighty warrior from the Dragon Ball Super anime. He’s the son of Vegeta and Bulma, and he has the ability to transform into a Super Saiyan.

Trunks is brave, determined, and always ready to fight for what’s right. He also has a bit of a naughty side, and he’s not afraid to make a joke.

In short, Trunks is the perfect example of a Super Saiyan hero. He’s strong, courageous, and just a little bit funny.

That’s why I love him!

The Amazon-exclusive Super Saiyan Trunks with Sword Glow Funko Pop! is coming soon. There’s no release date yet, but stay tuned because I’ll update more information in the long run.

Trunks is one of the main characters of the Dragon Ball franchise. The young warrior has a strong and immature personality. Although he is pretty strong for his age, he is often defeated due to his inexperience and overconfidence.

This character is also often used as comic relief, as his innocence and childishness make him a super funny guy.

Trunks was born in November of the year 766, something that made him a hybrid between Saiyajin and humans. His birth was unplanned, and during his early years, Trunks was almost solely raised and educated by his mother.

Vegeta did not look kindly at his son since he thought hybrids between humans and Saiyasins were an absolute disgrace.

However, at the end of the Cell Saga, the relationship between Bruma and Vegeta improved, and the couple eventually married. It was then that the two raised Trunks as an average family.

Trunks was very spoiled by his mother, while Vegeta was more strict in his education and training. However, the young man eventually saw his father as a true idol, and the two built a beautiful relationship.

Usually, Trunks is depicted with his blue or lilac hair and blue eyes, similar to Bulma’s.

On the other hand, several characters, such as Goku, Kuririn, or Bulma, have already stated that young Trunks is highly similar to his father, especially in certain features of his face.

During much of the Majin Boo Saga, Trunks wore a green uniform, with an orange belt and boots like those worn by Future Trunks.

However, in Dragon Ball Super, the young man traded the combat uniform for some jeans, a yellow jacket, and a white shirt, a very casual look.

During the Majin Boo Saga, Trunks is depicted as a cocky and proud character, just like his father Vegeta, a result of the education given by the Saiyajin. But, on the other hand, Trunks is also spoiled and selfish, just like his mother, Bulma.

But don’t be fooled, Trunks loves his family, and he is capable of anything to defend them, even sacrificing his own life.

In other words, Trunks may have several flaws and a complicated personality, but he would never let any family member or friend suffer!

Trunks achieved Super Saiyajin form at a very early age, thanks to his genetic heritage and the intense training given by Vegeta.

Vegeta has always been very strict with Trunks, as he does not accept the idea that Goten, Goku’s son and Trunks’ friend, could be more powerful.

After Trunks defeated Goten in the 25th Martial Arts Tournament, the Z warriors realized that the two worked very well as a team and were excellent candidates for fusion via the iconic Metamoru Dance.

After rigorous training given by Piccolo and Kuririn and spending a week in the Time Chamber, Trunks and Goten were able to master the Fusion Dance and fuse for the first time into the mighty warrior they named Gotenks,

Gotenks was so powerful that despite having a child’s body, he was able to transform into Super Saiyajin 3, something only Goku had done up to that point.