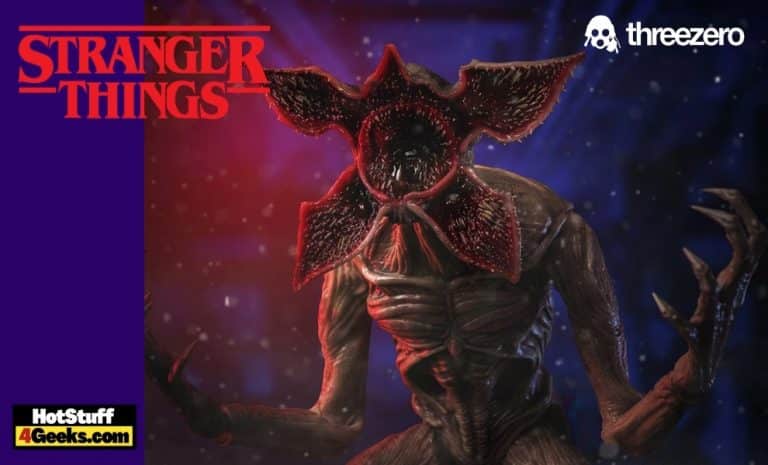 Based on the terrifying creature from the hit Netflix TV Series, the ThreeZero: Stranger Things Demogorgon 1:6 Scale Action Figure is coming to your doorway.

In Stranger Things, Netflix’s science fiction series, our heroes face a mysterious creature called the Demogorgon. Originating from the Upside Down, the monster entered the town of Hawkins after Eleven, who served as a guinea pig for psychic tests at Hawkins National Laboratory, unlocked the doorway to another dimension.

And while everyone thought he had been destroyed at the end of the first season, the third year of the series has shown us that he is back, even more, hungry and powerful than before.

The Stranger Things 1:6 scale Demogorgon stands approximately 16-inches tall and features a fully articulated original body with over 24 points of articulation. The torso, elbow, and ankle joints are cleverly hidden beneath a soft PVC and utilize a realistic multi-layered paint application to enhance the creature’s intimidating life-like appearance.

The figure includes 2x interchangeable heads, both opened and closed-mouth, and 2x pairs of hands for different posing options.

The Stranger Things – 1/6 Demogorgon Action Figure by ThreeZero is priced at $249.99. Pre-orders are already live and can be found at the links below. Its release is scheduled for January 2022.

But first, what exactly is the Demogorgon? It is a predatory humanoid creature that entered Hawkins from the parallel dimension known as the Upside Down. The beast came through the portal, kidnapped several residents, and took them to the Upside Down to feed. The friends and family of Will Byers, one of the Demogorgon’s victims, slowly began to discover the truth about the creature with the help of little Eleven.

Beyond that, however, little is known about the Demogorgon. We have reason to believe that future seasons of Stranger Things should shed some light on the monster’s origin.

The name Demogorgon is based on the Dungeons & Dragons role-playing game. There, the Demogorgon is a demon prince with two heads that strive to dominate each other.

In the series, when Eleven is taken to Mike’s house, the girl uses the Demogorgon play in D&D to represent the monster and explain that Will was hiding from it. From then on, the children start calling him by the name Demogorgon.

The Demogorgon is a being of immense physical strength and durability but who can also use telekinetic gifts. It is believed that it is attracted to blood, although this is not confirmed.

But without a doubt, his primary skill is that of traveling through dimensions. He has entered Hawkins repeatedly, creating portals and luring individuals like Will Byers and Barb into the Upside Down.

The Demogorgon‘s appearance is that of a tall, thin humanoid creature. Its head has no facial features and unfurls like a flower that reveals “petals” lined with many sharp teeth and a large open mouth. The monster’s open mouth closely resembles that of a plant known as a “monster flower.” The design really pleased the Duffer Brothers, who, from the beginning, wanted something that only had one mouth.