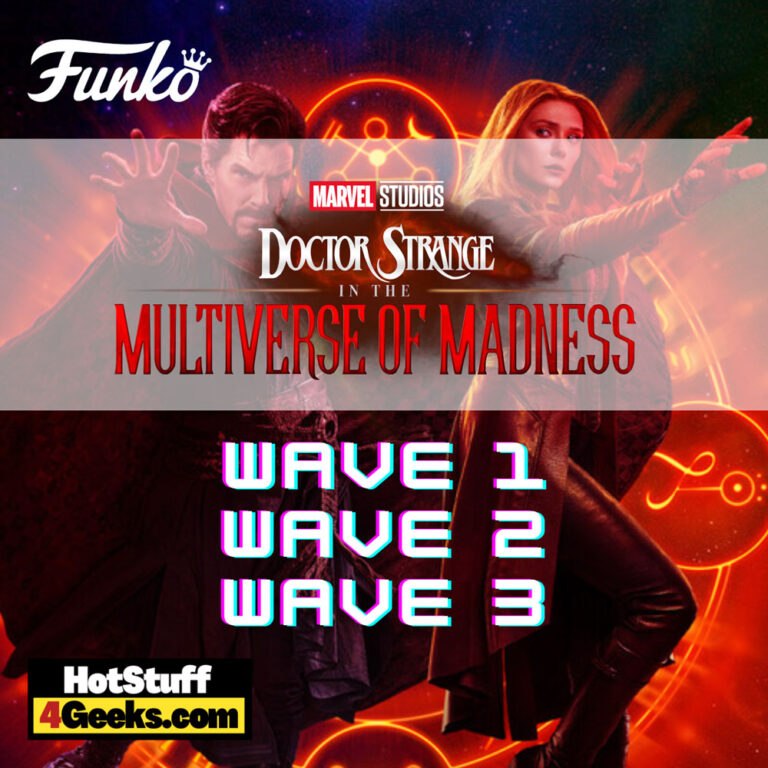 New Doctor Strange in the Multiverse of Madness Funko Pops has found its way online, giving us a chance to bring home a whole universe of weirdness!

The pops from Wave 1 and Wave 2 are available below – click to jump!

With a gigantic ocean of references and easter eggs, Doctor Strange in the Multiverse of Madness has now arrived in theaters. The (former) Sorcerer Supreme played by Benedict Cumberbatch, begins a journey through the MCU’s infinite realities.

Allied with America Chavez (Xochitl Gomez), the Master of the Mystic Arts, faces variants of himself, new versions of old opponents, and even some of the most beloved heroes of Marvel fans.

And at the end of all this mess, Strange still opens a new chapter in his life, including a new ally and a significant power boost.

With that set, let’s take a look at the movie-related Multiverse of Madness pops:

Doctor Strange in the Multiverse of Madness Funko Pops – Wave 2:

Doctor Strange in the Multiverse of Madness Funko Pops – Wave 1

Doctor Strange in the Multiverse of Madness Funko Pops – Wave 3 (Not confirmed!):

Doctor Strange In the MOM Funko Pop! vinyl figures  can be found for order at the links below (click to jump!) 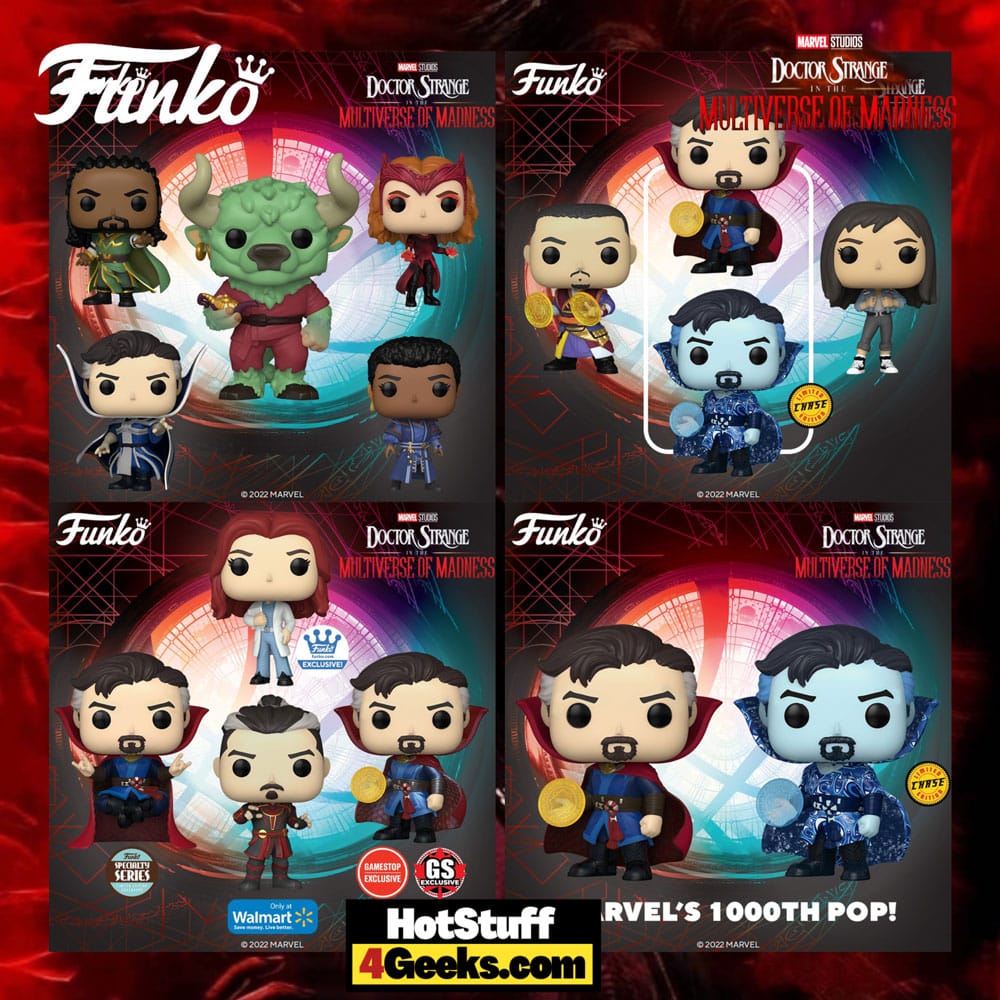 For those who left the movie theatre wondering, “what happened at the end?” I explain below the three scenes that close the movie.

The first, which serves as the traditional ending, shows Strange, after finally accepting that Wong (Benedict Wong) is indeed the new Sorcerer Supreme, walking through the streets of New York, seemingly happy with his new role as protector of the city’s Sanctum Sanctorum. 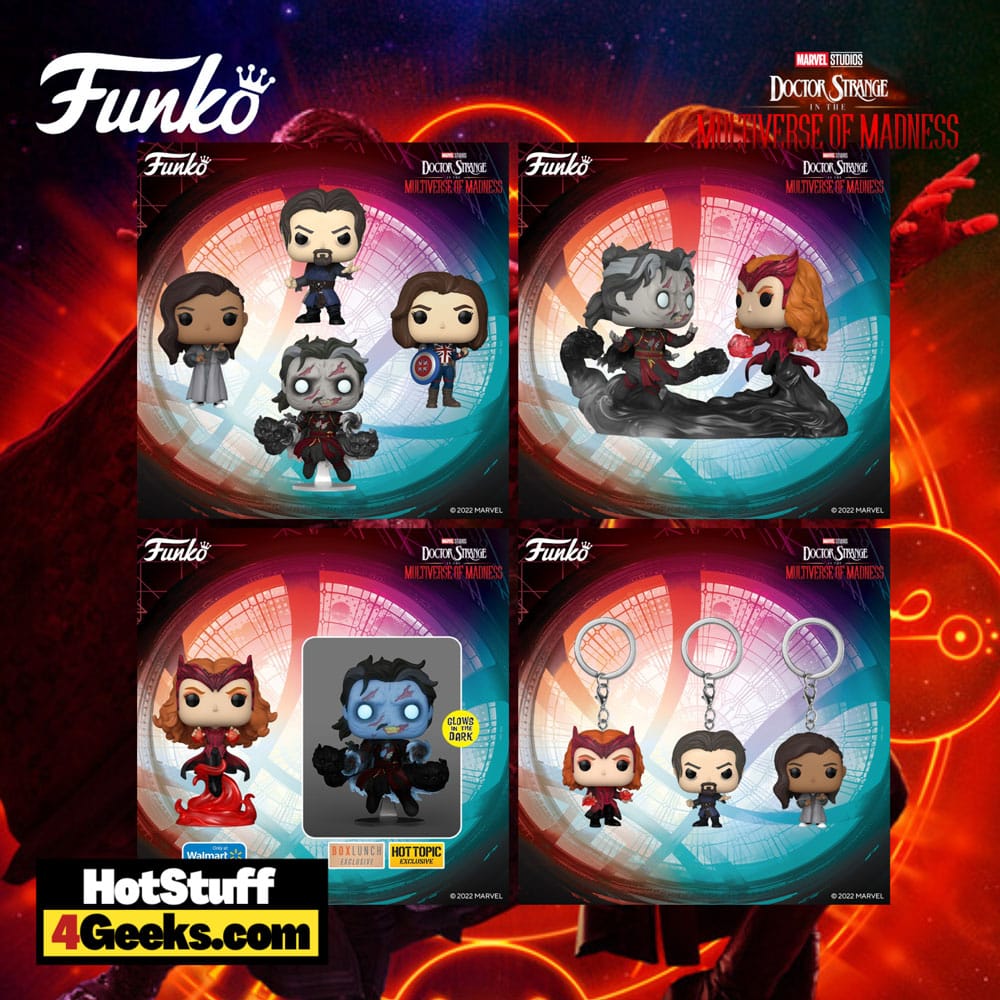 However, the hero falls to his knees during his walk, agonizing in pain. Here, a third eye, identical to the one possessed by one of his variants, opens on the Sorcerer’s forehead.

This extra eye often appears in the comics, especially when the Eye of Agamotto, the mystical relic Strange carries around his neck, is used. The eye brings extra powers to its wearer, including seeing through illusions and lies and “rewinding” recent events.

In the MCU, the Eye of Agamotto has different properties than in the comics, being primarily a receptacle for the Time Stone, although it does have other properties.

The necklace aids Strange in some more complicated spells, but the appearance of a “natural” third eye hints that his abilities have reached a new level by the film’s end.

After the first credits roll, we are back with Strange, now recovered from the appearance of his new eye and once again walking calmly along the New York sidewalks. He’s then intercepted by a mysterious woman, played by Charlize Theron.

She warns him that he has caused an Incursion (a clash of two realities that threatens the existence of the multiverse) and that he must accompany her to save the world.

Smiling – and with his third eye open – Strange accompanies this mysterious woman through a portal.

The new character is none other than Clea, Dormammu’s niece and one of Strange’s main love interests in the comics, having even married the Master of the Mystic Arts.

She also currently holds the position of Supreme Sorcerer in the comics, assuming the role after Stephen’s death.

Because she is a native of the Dark Dimension, her arrival in the MCU suggests the return of Dormammu, with the third feature of the franchise taking place, perhaps in the evil reality in which the demon is imprisoned.

On the other hand, the second post-credits scene is nothing more than a romp from Sam Raimi and Bruce Campbell, returning to Evil Dead days. The duo recreates the iconic scene in which Ash Williams, played by Campbell, has his hand possessed by a demon and must cut it off to get rid of the creature.

In Multiverse of Madness, the one who dominates the hand of the actor, who lives as a pizza vendor, is Strange, who bewitches him into beating himself for an indefinite amount of time (it can be a few hours or “three weeks”).

When the spell finally loses its effect, the pizza man, already covered in bruises, looks into the camera and shouts, “It’s over!” celebrating the end of his torture and, of course, of the movie.

Okay, but what about Wanda?

One of the main characters in Multiverse of Madness is Wanda Maximoff, the Scarlet Witch, lived once again by Elizabeth Olsen.

After America manages to pull the villain out of the bloodthirsty frenzy caused by Darkhold’s powers, she destroys the temple of the demon Chthon and is buried in the rubble, in an ending that implies her death.

It turns out that her death is unlikely for two reasons.

First because, between Avengers: Endgame and WandaVision, Wanda has become one of the most beloved characters by MCU fans, and to discard her in one of the first Phase 4 films would be a waste of both the Scarlet Witch and Olsen, whose performance as the heroine has been highly praised by audiences and critics alike.

But considering that Multiverse of Madness doesn’t have a visual confirmation of Wanda’s death is suspicious, to say the least.