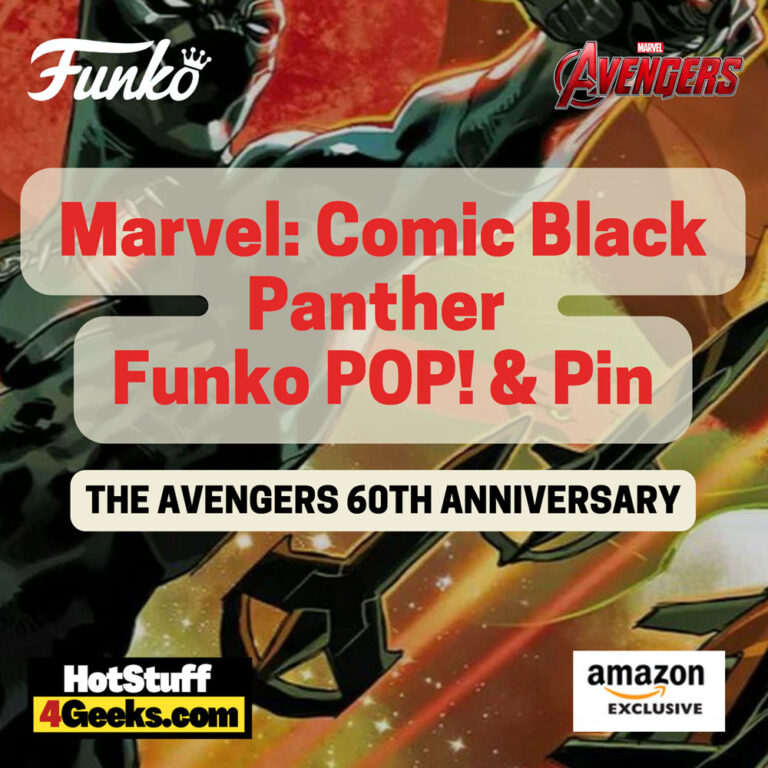 Sixty years ago, The Avengers burst onto the comics scene and changed the superhero landscape forever. Now, we can celebrate their legacy with this limited edition Funko Pop! & Pin: The Avengers: Earth’s Mightiest Heroes – 60th Anniversary – Comic Black Panther Funko POP! Vinyl Figure with Pin Set – Amazon Exclusive – how incredible is that?!

This character-accurate figure captures Black Panther in his classic comic book outfit and comes with a special anniversary pin to commemorate the occasion.

Looking at it inspires confidence—I can feel the power radiating off this POP!

Its fabulous look will add some funk to our collection and remind us to stand up for justice wherever it is threatened.

Plus, it’s an excellent way to honor the Marvel heroes who have entertained us all these years.

If you’re an avid fan of Marvel, The Avengers, or just Funko POPS, this piece is worth adding to your collection!

The Amazon-exclusive Comic Black Panther Funko POP! and Pin (The Avengers 60th Anniversary) is coming soon. There’s no release date yet, but stay tuned because I’ll update more information in the long run.

Black Panther is a part of the renowned Marvel universe and is a formidable Avenger.

Black Panther, also known as T’Challa, is a superhero in American comic books published by Marvel Comics. He first appeared in Fantastic Four #52 (July 1966) and was created by writer Stan Lee and artist Jack Kirby.

Black Panther is the king and protector of Wakanda. He joined the Avengers, a team of superheroes in the Marvel Comics universe, in the 1970s.

He has been a prominent team member and has been featured in many Avengers storylines, including “Avengers vs. X-Men” and “Secret Invasion.”

A powerful warrior, brilliant strategist, and renowned king, he is no stranger to taking on formidable adversaries.

As a member of the Avengers, his incredible abilities have saved Earth countless times.

From rampaging alien armies to megalomaniacal supervillains, Black Panther has never shied away from danger.